How Sleep Affects The Body

Sleep may appear to be as simple as feeling tired, lying down, and nodding off. But the physiological state of sleep is created by a complex interplay of processes in the brain and body, beginning with signals from the circadian rhythm’s master clock.

While sleep originates in the brain, it is a body-wide experience that is essential to the operation of every system, from memory to metabolism. Vital functions such as breathing and temperature change during sleep, allowing the body to rest and repair. The body may be still during sleep, but it is far from inactive.

Q: What is the circadian rhythm? A: Any biological process on a 24-hour cycle, including sleeping, waking, and eating.

Sleep and The Body’s Systems

The body’s systems undergo significant change during sleep. Blood vessels in the skin dilate and warm the skin. Urinary output decreases, while the sympathetic and parasympathetic nervous systems take turns resting in various stages of sleep. (1)

Some bodily functions remain active or dormant during the full length of the sleep state, while others fluctuate. Each system has its own essential role over the course of a night, and deviates from wakeful activity in unique ways. 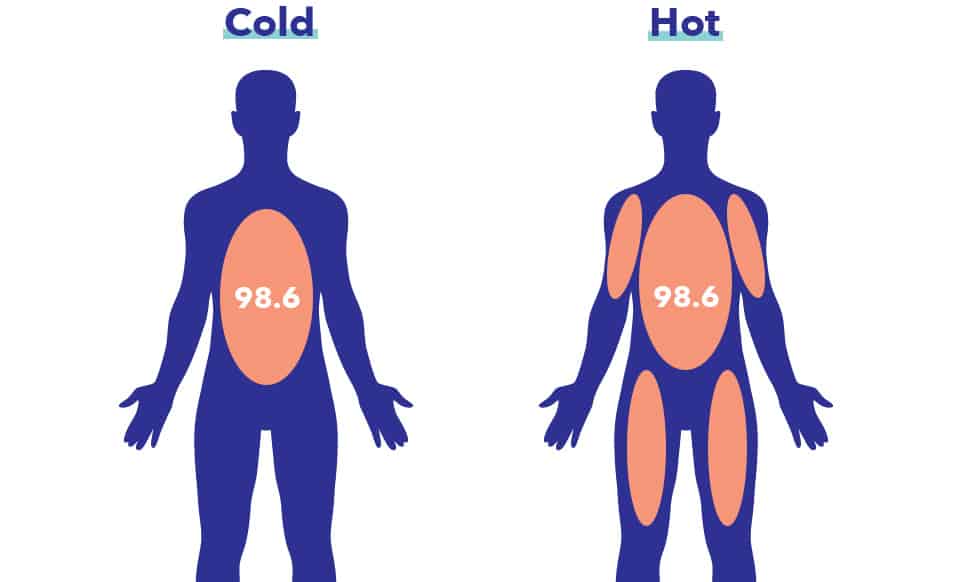 Sleep and body temperature are closely linked, and each follow a 24-hour cycle. Core temperature is typically regulated by:

Core temperature begins to drop in the late afternoon and gradually decreases over the course of the evening. Core temperature falls further after sleep begins, while peripheral temperature remains steady. Reduction in core temperature during sleep is likely an energy-conserving function that allows the body to direct that energy toward other areas of the body.

Sleeping in an environment warm enough to raise body temperature can reduce REM sleep as well as the deep, slow-wave sleep characteristic of the N3 stage. Because thermoregulation is reduced during sleep, the body chooses to wake up to regulate temperature rather than remain asleep in an excessively warm environment. (2)

Humidity worsens the effect of heat on body temperature, increasing the risk of disrupted sleep. Humidity can counteract the reduction in core temperature that comes with sleep, delaying or preventing sleep.

The core temperature on waking is usually the normal human temperature of 98.6 degrees. Body temperature is highest — about 100.4 — around mid-day, a level that helps us stay alert. Core temperature drops to its lowest at dawn, a few hours before awakening.

The ability of an organism to maintain a consistent internal temperature despite fluctuating ambient temperatures.

During REM sleep, the body reduces sweating and shivering. This temporary reduction in thermoregulation makes the human body nearly cold-blooded for the length of REM sleep. (3) Sweating increases during the slow-wave sleep of the N3 stage. These changes during N3 and REM may be why the body disrupts sleep if overheated.

Heart rate varies throughout a typical night, slowing or accelerating according to sleep stage. Sleep allows the heart to slow down, rest, and repair.

The heart rate slows as sleep begins and continues to fall as the body transitions into deeper stages of sleep. Nerve impulses responsible for slowing the heart increase, while those that speed up the heart decrease. (6) The heart rate decreases by approximately twenty-four beats per minute in adults. 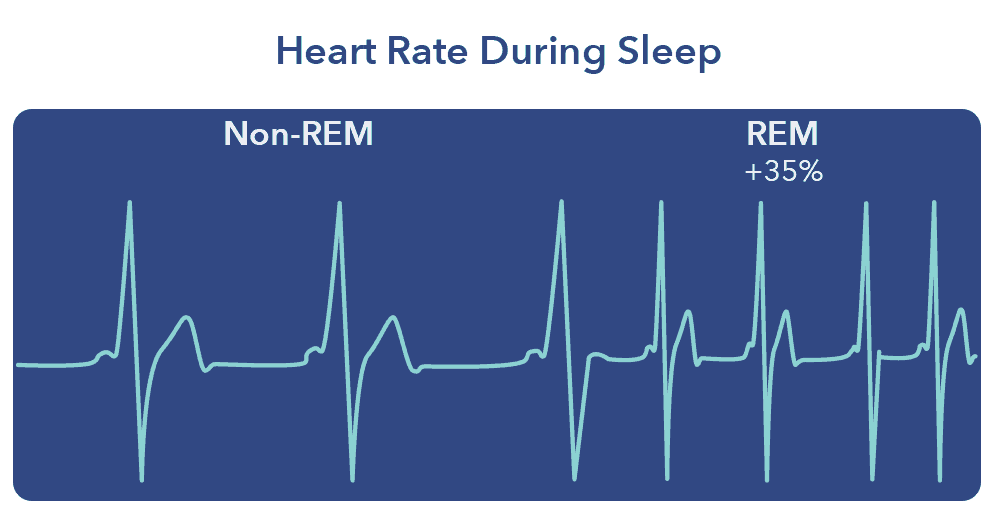 The heart rate during REM sleep may increase as much as 35% over other stages of sleep. Heart rate may increase even further during episodes of intense dreaming or nightmares. EEG measurements during REM sleep show a direct link between dreaming activity and accelerated heart rate. Because dreaming appears to require significant physical energy, the body enters another cycle of non-REM stages after REM sleep to rest and recover.

People with pre-existing medical conditions or heart rhythm abnormalities may experience disruptions to normal heart rate overnight. Sleep disorders such as sleep apnea may also cause heart rhythm changes due to the drop in blood oxygen that occurs when the airway is obstructed and breathing stops.

Breathing is highly regular during non-REM sleep. Blood levels of pCO2 increase during non-REM sleep, while respiration rate decreases. This change in breathing continues throughout sleep, but on waking, the decreased ventilation and increased pCO2 are read by the body as an error signal. This signal induces hyperventilation until normal waking breathing rates and blood CO2 levels are reached. (9) 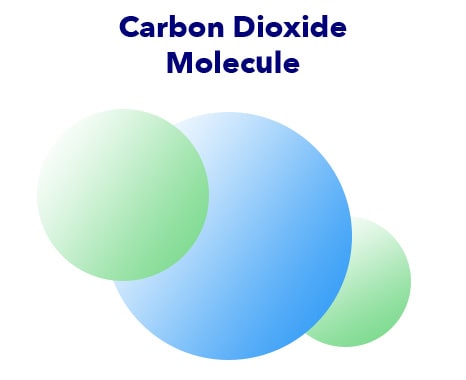 Resistance in the airway increases significantly during non-REM sleep. This resistance is due to changes in the tone of the airway muscles, though compensatory changes in other ventilator muscles prevent the resistance from interrupting breathing.

Changes in airway tone may, however, contribute to the sleep disorder sleep apnea in people who are at-risk for the disorder. Sleep apnea occurs when the tongue or soft palate obstruct the airway during sleep and cause breathing to stop. Breathing may stop as many as one hundred times per night or more. (10) The breathing rate increases and becomes less regular during REM sleep, when the brain displays similar activity to wakefulness. Breathing may become more rapid and shallow when the eyes are most active during REM sleep.

Sleep and metabolism are closely linked in a bi-directional relationship. Metabolism is not just the rate at which calories are burned, but an entire system of physiological processes. Metabolic functions follow a circadian pattern, as do many of the body’s functions and hormones. (11)

The metabolic rate decreases by fifteen percent during sleep. This lower rate, along with reductions in non-REM sleep brain temperature, appear to help repair damage done by free radical release during the metabolic process. 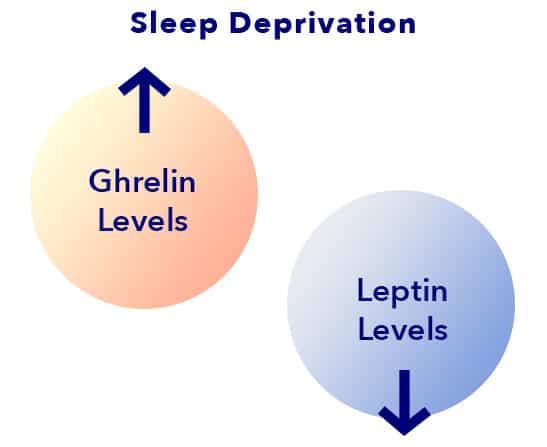 Leptin and ghrelin are appetite controlling hormones. Both are sensitive to sleep, and may increase or decrease depending on sleep sufficiency or insufficiency. (12) Ghrelin increases appetite and reduces the output of energy, while leptin decreases appetite and regulates the balance of energy so the body doesn’t feel hungry when energy stores are adequate.

Leptin levels typically increase during sleep, signaling the brain to minimize feelings of hunger overnight. Insufficient sleep causes leptin levels to fall, telling the brain to feel hungry and store existing energy as fat. Metabolism slows down, and feelings of hunger may be difficult to satisfy. This may cause a sleep-deprived person to continue eating due to lack of proper signals to and from the brain.

Even short-term lack of sleep disrupts the release of hunger hormones and increases the risk of weight gain and obesity. Glucose tolerance increases with sleep loss, as well, raising the risk of prediabetes and diabetes. (13)

The inability of the body to properly respond to increasing levels of glucose, raising the risk of diabetes.

These changes in appetite hormones may have allowed our early ancestors to eat abundantly during the summer months, when daylight hours were long, fewer hours were spent asleep, and food was plentiful. Though storing fat and food for winter may have been advantageous for survival thousands of years ago, the hormone changes that accompany sleep loss cause significant health problems in modern populations.

Human beings sleep more than an hour less than they did eighty years ago. As sleep duration has decreased across the world, rates of obesity have climbed. While physical activity and consumption of healthy, unprocessed foods have also fallen, many sleep scientists believe that sleep loss is an overlooked factor in rising levels of obesity.

Sleep is essential for muscle growth and repair. The majority of muscle regeneration takes place during sleep when growth hormone is released by the pituitary gland. Growth hormone allows the cells in muscles to regenerate and repair small tears created during movement or exercise. 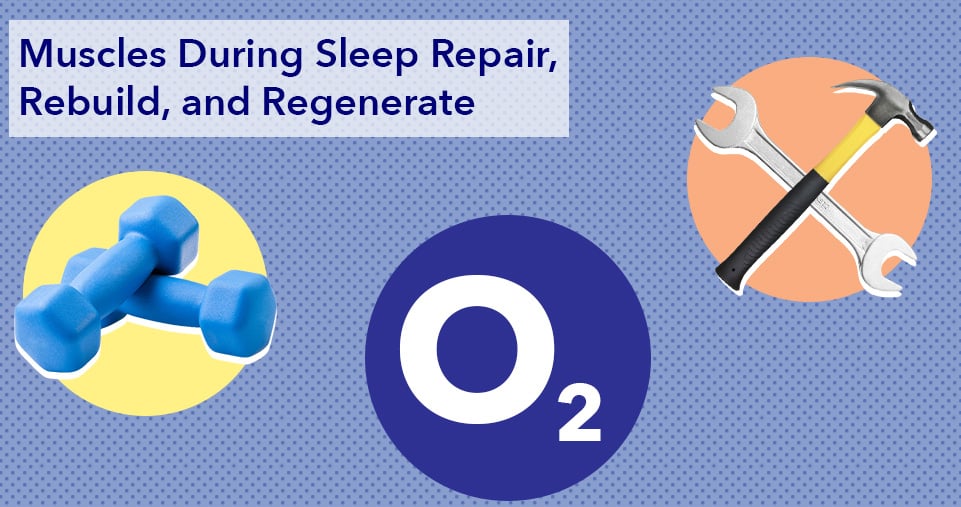 New actions the muscles have taken during waking hours are logged as memories during sleep. This type of memory is called “procedural memory,” and refers to motor skills such as riding a bike or learning to ski. Procedural memory does not take conscious thought, and is also involved in such skills as playing an instrument and learning a language.

The release during sleep of the hormone prolactin helps reduce inflammation and promote recovery in joints. (14) Blood flow to muscles increases during sleep, allowing them to receive the oxygen they need to repair.

Q: What is the pons? A: The pons is a 2.5 centimeter structure in the brainstem. Among other functions, the pons controls taste, touch, pain, and rapid eye movement during sleep.

Immune function is strongly influenced by both sleep and circadian rhythm. Sleep helps to regulate immune defense and what’s called immunological memory. This allows the immune system to form a memory of bacteria and viruses, and develop immunity against them in case of a future attempt at infection.

Chronic sleep deprivation disrupts the functioning of immune cells and causes inflammation that appears to be damaging to the body rather than protective. This kind of low-grade inflammation is associated with diabetes and cardiovascular disease.

The immune system responds to sleep loss with a dramatic reduction in what are called killer cells. Even a modest amount of sleep deprivation lowers the numbers of these disease-fighting cells, leading to an increased risk of viral illness, bacterial infections, and even cancer. Multiple studies have shown that cancer rates are significantly higher in night shift workers and others subjected to interrupted sleep and chronic sleep loss.

Sleep is essential to life and involves every part of the body and brain. During sleep, the body repairs, rests, and regenerates, and prepares for another day of wakefulness. Sufficient sleep allows for optimal functioning of all biological systems, from immunity to metabolism.

The more we understand about the intricate process of sleep, the better able we are to appreciate its impact on our well-being. Once thought to be a dormant state, we now know that adequate sleep is crucial to all aspects of human health.