If you woke up this morning feeling refreshed and energized, chances are you had plenty of N3 sleep. N3 is the third stage of sleep, and the deepest and most restorative of all the four sleep stages.

Like N1 and N2, N3 is a stage of non-rapid eye movement sleep, when the eyes are relatively still and dreams are uncommon. Essential functions such as wound healing and memory processing take place during N3 sleep, which typically starts around forty minutes after the sleep period begins. (1) Episodes of N3 are longer at the beginning of the night, and may continue for ninety minutes. We spend approximately 20% of our sleep time in the N3 stage of sleep. 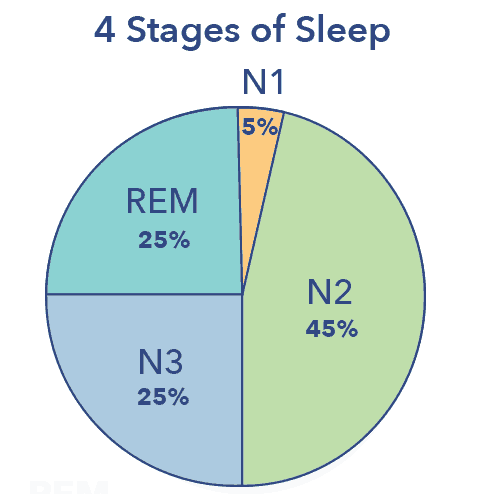 Note: The content on Sleepopolis is meant to be informative in nature, but it shouldn’t be taken as medical advice or take the place of medical advice and supervision from a trained professional. If you feel you may be suffering from any sleep disorder or medical condition, please see your healthcare provider immediately.

On electroencephalogram (EEG), N3 sleep is characterized by a distinct pattern of synchronized brain waves. These brain waves give N3 the moniker “slow-wave sleep.”

During N3 sleep, significant physiological changes occur. These may include:

Q: What are sleep spindles? A: A burst of brain wave activity characteristic of N2 sleep. On EEG they look similar to a spindle of yarn. Sleep spindles are thought to be associated with learning and declarative memory.

External stimuli such as noise and light are less likely to cause awakening during N3 sleep. Reduced blood flow to the brain as well as sensory gating, a process by which the brain blocks out all but the most important or threatening messages, contribute to deep sleep during N3. (3) Confusion and disorientation typically result if a sleeper is roused during N3 sleep. Recovery of alertness and resumption of normal brain function may take at least thirty minutes once awakening occurs. 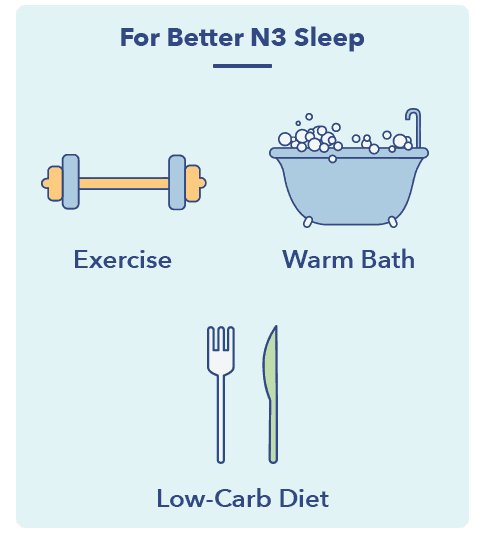 An unusually high amount of N3 sleep may occur during recovery from sleep deprivation, while reduced N3 sleep may result from the use of benzodiazepines such as Valium or tri-cyclic anti-depressants.

Insufficient N3 sleep due to sleep deprivation, medication side effects, or insomnia may cause an impaired ability to process and store memories. Decreased time spent in N3 may also be associated with epilepsy and depression. Older people tend to spend less of their sleep time in N3, and display fewer sleep-related brain waves compared to younger people.

The six-layer gray matter of the brain responsible for higher-order functions such as language, cognition, sensory perception, and reasoning.

Delta waves are the predominant form of brain waves in babies, who spend a significant amount of sleep time in N3. By adulthood, men display fewer delta waves on EEG than women do. Delta waves decline in both sexes throughout life, and by age seventy-five delta waves may be entirely absent during sleep.

The high-voltage delta waves of N3 sleep are interspersed with surges of what are called sharp waves. Sharp waves originate in the hippocampus of the brain and surrounding area, and appear to be closely connected to memory processing. (5) During slow wave sleep, the brain makes connections between events that may appear unrelated, stores some experiences as memories, and discards others. (6)

The sharp waves of N3 may represent replays of brain activity experienced during wakefulness and subsequently reinforced in sleep during the process of memory formation. Sharp waves may also help compress memories so that when an event is remembered, it takes place in the mind at the speed of firing neurons rather than in real time as the event occurred.

Because delta waves and sharp waves are so synchronous, they may be particularly vulnerable to interruption by such brain disorders as epilepsy.

Brain activity during N3 can’t be explained by the kinds of external signals the brain would usually receive during wakefulness. This activity appears to indicate communication between neurons as they direct important bodily functions, including:

Q: What are cytokines? A: Cytokines relay messages between cells. There are several types of cytokines, including those that stimulate blood cell production and others that modulate the immune system.

Healing takes place during N3 sleep, along with growth of muscle, bone, and other tissues. (7) Reduced brain activity during N3 sleep makes more blood available for muscle and tissue repair. Delta waves signal the release of pituitary and adrenal hormones such as prolactin and growth hormone, which help facilitate healing. (8)

Some researchers theorize that sleep may have evolved in all species to help the body fight infections, particularly those caused by parasites. Both sleep and the immune system appear to be activated by similar processes in the hypothalamus, brain stem, and hippocampus. (9) 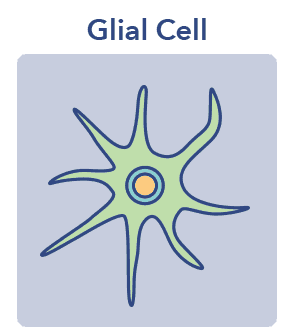 Glial cells in the central nervous system receive sugar during the N3 sleep, allowing them to provide energy to the brain. Glial cells also clear out toxins and harmful substances, cleansing waste products from the brain with cerebrospinal fluid. This fluid flows through the brain in a series of channels, and is controlled by the shrinking and expanding of glial cells.

Glial cells also appear to clear beta-amyloid from the brain. Beta-amyloid is a neurotoxin implicated in dementia and similar neurodegenerative conditions. This sticky protein may build up if glial cells are unable to flush the brain during N3 sleep, potentially increasing the risk for Alzheimer’s and other diseases associated with cognitive decline.

Parasomnias such as night terrors, sleep-eating, and sleepwalking occur most commonly during the N3 stage of sleep. Parasomnias are a category of sleep disorders characterized by abnormal behaviors, movements, and emotions that typically occur while falling asleep, during sleep, or waking from sleep.

Parasomnias are caused by incomplete awakening during N3 sleep, resulting in partial arousal of the autonomic nervous system. This partial arousal can lead to unusual behavior that may be disturbing or alarming to the parasomnia sufferer.

Numerous types of parasomnias may occur during N3 sleep, including:

The temporary and often frightening inability to move or speak while waking up or falling asleep.

Less common parasomnias include sleep sex, or sexsomnia, a condition involving sex acts that occur during sleep. Exploding head syndrome causes the auditory illusion of an explosion or other loud noise upon falling asleep or waking up. This syndrome may affect up to 10% of the population. Symptoms can occur frequently, or only on occasion. The condition appears to be harmless, and may have some connection to stress, ear conditions, or genetic factors. 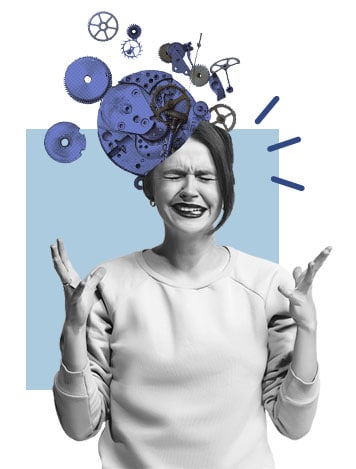 Sleep-related eating disorder, or SRED, is both a parasomnia and an eating disorder, and is characterized by eating or binge-eating while asleep. (10) SRED sufferers may have no recollection of episodes, or may be awake for part of them.

While normally the desire to eat is inhibited during sleep, in SRED the desire to eat persists during the N3 stage of sleep. Approximately half of SRED sufferers have a psychiatric condition or mood disorder. SRED may also be more common among people classified as clinically obese. (11)

Parasomnias may also include unusual or disturbing perceptions or dreams. Night terrors occur most often in young children, and tend to resolve over time. Parasomnias as a whole occur more frequently in childhood, becoming less common  in older adolescents and adults.

When we think of sleep, we rarely think of the unique features and important functions of each individual sleep stage. We may be aware of having dreamt or awakened during the night, but few of us consider sleep’s unseen effects on the body and our health.

N3 sleep is not just another phase of sleep. N3 sleep is when we heal and form memories, when the brain is cleared of toxins and harmful substances. We feel most restored when we’ve had sufficient N3 sleep, and we may be healthier, too. Like every stage of sleep, N3 is an essential part of one’s overall well-being.