The Genetics of Sleep

Sleep is a universal physiological drive with similar processes and rhythms across the human species. Though sleep follows a recognizable pattern, there are numerous differences among healthy individuals. Though some of these differences are environmental and relate to meal times, travel schedule, and work routine, many are inherited.

Whether you’re an early bird, a night owl, or fall somewhere in between, your unique genetics have a lot to do with your sleep patterns. How much sleep you need, the quality of your sleep, even your chance of sleepwalking are all connected to some degree to your genes. 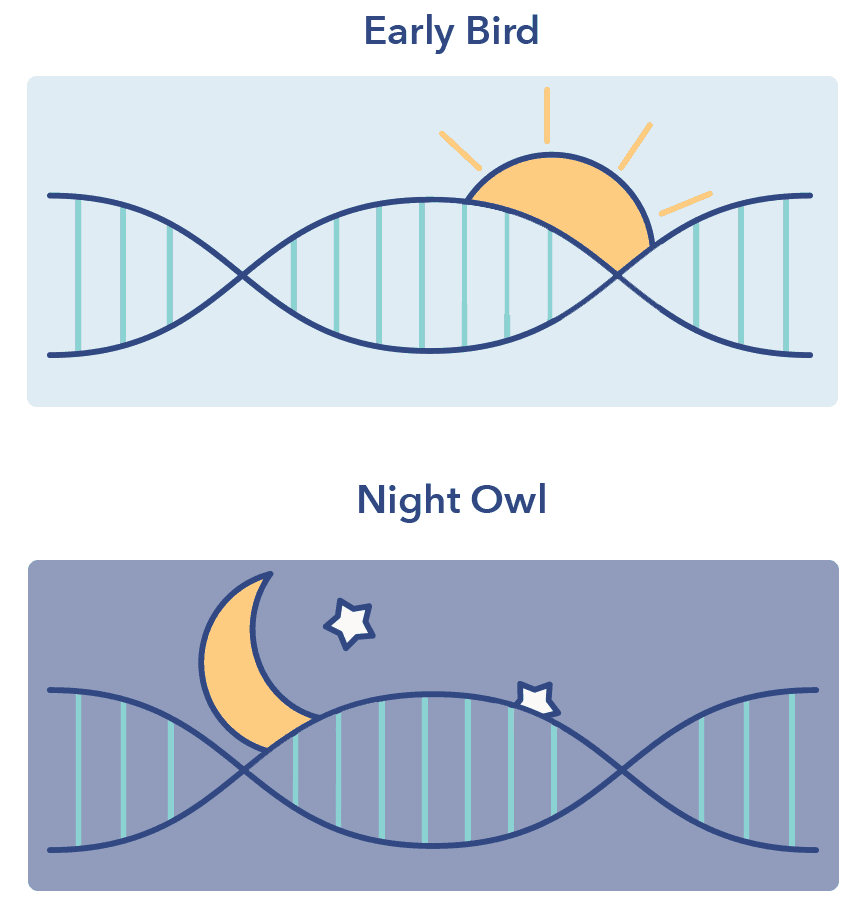 We’ve all heard about people who can get by on four hours of sleep each night. Some of us need six, while others need eight or nine. Studies show that genetic factors play a significant role in how long most living organisms need to sleep.

Researchers bred thirteen generations of fruit flies, mating those who tended to sleep less or more with others who displayed similar sleep patterns. Each generation of what are called short sleepers slept less than the previous generation, while sleep duration increased for the flies known as long sleepers. (1) This study suggests that genetics are strongly associated with duration of sleep, at least in certain organisms. 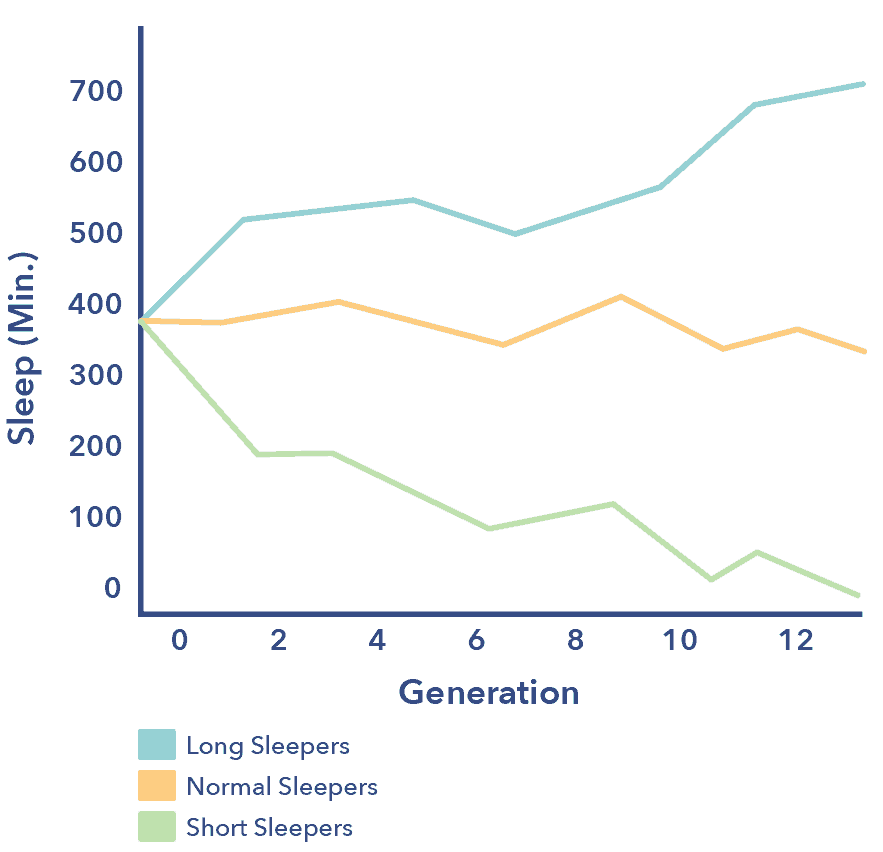 Another study on twelve year-old twins showed similar sleep patterns to genetically identical siblings, again revealing the impact of DNA on length of sleep. (2) When each twin chose to go to bed and wake up was particularly influenced by genetics. Sleep architecture, or the time spent in each sleep stage, was also similar between identical siblings.

The fruit fly, or drosophila melanogaster, is often used in studies due to its ability to lay large numbers of eggs, thrive under laboratory conditions, and breed quickly. The fruit fly has only four chromosomes, making their genetic code easy for researchers to observe.

Stress may influence vulnerable genes, reducing quality of sleep as well as duration. The stimulation of certain neurons as a result of stress appears to set the stage for sleep difficulties, including trouble falling asleep, staying asleep, and falling back to sleep. (3)

Japanese researchers have shown that certain mutations in molecular pathways can cause fragmented sleep, impacting the quality and quantity of sleep. (4) Another study showed that mutation of the circadian clock gene known as CRY1 causes delayed sleep phase disorder in families. This leads to generations of “night owls” with extended circadian rhythms that run later than the usual societal norms. Attempts to conform to earlier sleep and wake times may result in fragmented sleep and the effects of sleep deprivation.

One “night owl” study subject who was regularly exposed to bright early morning light was able to successfully conform to typical sleep and wake times. This may mean that a delayed sleep pattern can be altered under certain environmental conditions that influence circadian rhythm, such as light cues.

Q: What is a molecular pathway? A: A molecular pathway refers to interactions among molecules that lead to a particular result or change within a cell. Pathways can cause cells to move, or turn genes on or off.

Sleep disorders may be the result of lifestyle and behavioral factors, other medical conditions, or genetics. They may be idiopathic, as well, meaning they have no apparent cause. There are as many as eighty recognized sleep disorders affecting approximately seventy million Americans. 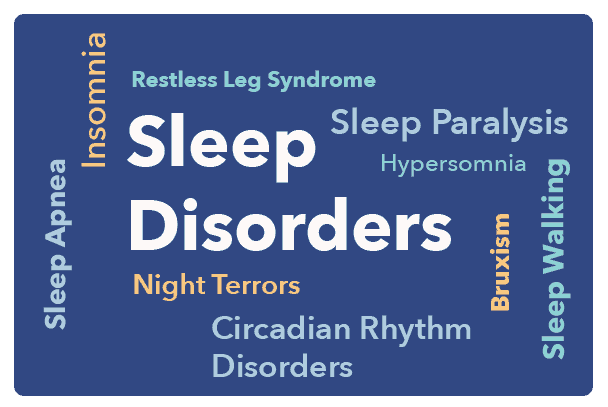 Restless legs syndrome causes uncomfortable or painful sensations in the limbs as well as a strong desire to move them in response. The disorder typically occurs at night as the sufferer is preparing to sleep. Restless legs syndrome may prevent, delay, or interrupt sleep, leading to fatigue and other symptoms of sleep deprivation.

A hormone and neurotransmitter that helps relay signals between nerve cells. Dopamine also helps us recognize rewards and take action toward achieving them, causing feelings of pleasure and satisfaction.

Genes expressed in various brain regions and adrenal glands appear to be associated with insomnia, one of the most commonly diagnosed sleep disorders. (6)

Researchers investigating the link between genetics and insomnia did not find a connection with genes linked to circadian rhythms, or neurotransmitters involved in the sleep-wake cycle. Instead, they discovered that insomnia may be connected to as many as 135 genes in multiple parts of the brain including the amygdala, a primitive part of the brain involved in the fight or flight response.

Some of the genes implicated in recent insomnia research are exclusive to women, while others are exclusive to men. Stress may also be a factor in insomnia due to its effect on the way genes express themselves. This process is called epigenetics, and can be passed from parents to children. Epigenetics may be reversible with environmental or behavioral changes. (7)

Kleine-Levin syndrome is a rare form of hypersomnia with a clear genetic component. Sufferers tend to be adolescent males, though adults and girls may be affected, as well. There appears to be a higher than normal incidence of the syndrome among those of Ashkenazi Jewish descent. (8)

Symptoms of Kleine-Levin include episodes of extreme sleepiness, mood and personality changes, unusually high intake of food, irritability, and uninhibited sexual behavior. Symptoms may be caused by a dysfunction of the hypothalamus and thalamus regions of the brain, where control of these behaviors originates.

Kleine-Levin episodes usually decline in frequency over the course of a decade, and may resolve completely by adulthood. (9) Kleine-Levin syndrome may be triggered by the interaction between susceptible genes and certain environmental conditions.

Q: What is the hypothalamus? A: An almond-sized part of the brain that plays a crucial role in many essential functions, including hunger, sleep, attachment, thirst, and body temperature.

Recent studies of twins reveal that sleep paralysis may have a genetic association. The symptoms of sleep paralysis include the inability to move during the first seconds or minutes of wakefulness. Symptoms are often considered disturbing or frightening, and may occur with relative frequency.

Sleep paralysis falls under the category of parasomnias, sleep disorders that occur during waking or falling asleep. Parasomnias are particularly associated with REM sleep and N3, the third and deepest stage of sleep. (10) Sleep paralysis is also common among those with narcolepsy, who suffer from a dysfunction of the sleep-wake system.

Of eight hundred identical twins studied, 53% showed similar sleep disruptions due to sleep paralysis, demonstrating a moderate genetic link to the disorder. Certain genes known as PER2 genes are linked to circadian rhythms and the sleep-wake cycle, and may be implicated in sleep paralysis.

Recent sleep science supports the concept of a genetic component in sleepwalking. (11) Sleepwalking is a parasomnia that tends to occur during N3 sleep. Activity that occurs during sleepwalking may include sitting up in bed, performing various tasks, or getting dressed while asleep.

The official term for sleepwalking and other unusual parasomnias such as talking, leaving the house, and driving while asleep.

Twin studies, family studies, and examination of DNA reveal that teeth-grinding during sleep is associated with genetics. (12) Approximately half of those diagnosed with the disorder have an immediate family member who grinds their teeth. Sufferers may inherit a genetic propensity for teeth-grinding but not experience the disorder until a stressful event occurs.

As many as forty million Americans may grind their teeth at night. The disorder is more common in children and adults under thirty. Because teeth-grinding involves abnormal movement during sleep, it is considered a parasomnia like sleepwalking and sleep paralysis. (13)

Symptoms of teeth-grinding include jaw pain, tooth damage, and grinding noises at night. Most episodes of grinding happen during changes in the depth of sleep, typically from one sleep stage to another.

Q: What is a bruxist? A: A person who suffers from bruxism, or tooth-grinding. To “brux” means to grind the teeth.

Obstructive sleep apnea may have a genetic connection, particularly when caused by inherited anatomical features such as a small jaw or a tendency to gain weight in the neck area. (14) This type of apnea is caused by the tongue falling into the back of the throat during sleep, obstructing breathing. Obstructive sleep apnea may run in families, particularly among relatives who are male, with a higher body mass index.

Central sleep apnea, which originates with a dysfunction of breathing signals in the brain, may involve autonomic nervous system abnormalities. Some of these abnormalities may have a genetic basis, particularly in cases without another apparent cause. Most cases of central sleep apnea are not caused by genetics, but by medical conditions such as renal or heart failure, use of narcotics, high altitude, or severe obesity.

All forms of sleep apnea may cause serious health risks, including stroke, obesity, and metabolism dysfunction.

Sleep is affected by environmental factors, personal lifestyle, stress, and genetics. Like height or facial features, sleep needs are individual but strongly influenced by family heredity.

Recognizing and adapting to our unique sleep needs is important for emotional and physical health. Though genetics may cause a predisposition to certain sleep patterns or disorders, medical treatments and behavioral changes can help improve the both the quality and pattern of sleep.