What Is Exploding Head Syndrome? 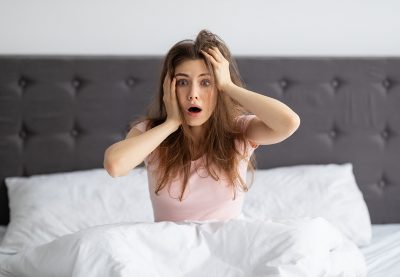 Humans have very few innate fears — that is, fears that we’re born with as opposed to those that are acquired over time. Along with fear of pain, falling, and sudden movement, the fear of loud noises is often considered to be one of them.

Imagine then what it must be like to be drifting off to sleep when you suddenly hear a loud noise. You’re in a drowsy, semi-conscious state when you experience what sounds like an explosion, a gunshot, a door slamming, or fireworks going off in your head.

“Exploding head syndrome is a sudden, brief perception of a loud sound or explosion in the head,” says Dr. Stephanie Stahl, sleep medicine physician and neurologist at Indiana University Health. Stahl notes that the disorder typically occurs when drifting from wakefulness to sleep, but also explains that it can occasionally occur when someone is transitioning from sleep to wakefulness.

How Common Is Exploding Head Disorder, And How Frequent Are EHD Episodes?

Exploding head disorder is thought to be something of a rarity. However, it’s also believed to be underreported, so it’s difficult to know exactly how many people have the condition. It’s also challenging to ascertain whether certain demographics are more prone to EHD than others.

The condition was once thought to be more prevalent in middle-age women, but it may simply be that this particular demographic is more likely to report having the symptoms.

“The reason that it’s thought to be more reported in that age group is when they experience the exploding head syndrome symptoms, they’re concerned that it’s something else and that provokes them to bring it up,” says Stahl. “The question is who’s actually reporting it,” she adds, noting that the condition is very likely underreported in other age groups.

Dr. Brian Sharpless, a clinical psychologist, has researched and written about the subject extensively. He co-wrote a chapter on the subject in the book Unusual and Rare Psychological Disorders: A Handbook for Clinical Practice and Research.

One study Sharpless conducted found that 18 percent of college students sampled reported experiencing at least one episode of exploding head syndrome, with no variability in prevalence rates by gender. Sharpless also found that the condition seems to be more prevalent in those with sleep paralysis. “They’re both parasomnias which occur in the transitions either to or from sleep. Both also appear to be partially related to sleep disruption,” says Sharpless.

The frequency of EHD episodes can vary greatly from person to person. Some may only experience a single episode and never have a recurrence, while others may have several episodes of explosive noises sounding off in their heads in a single night.

“You might go your whole life and only experience it once,” says Sharpless. “Then you’ve got some people who experience it so regularly that it causes disruption in their lives. Could you imagine hearing a bomb going off in your head seven times a night just as you’re falling asleep? For these people, it will not only make them have disturbed sleep — and they’ll be tired throughout the day — but they might also begin to have anxiety in the bedroom,” he adds.

How Is Exploding Head Disorder Diagnosed?

Exploding head disorder is most often diagnosed through self-reporting of symptoms.

“There’s no gold standard measure for this because it’s just not something that’s been studied extensively, but I developed a clinical interview called the Exploding Head Syndrome Interview (EHSI),” says Sharpless. He also notes that many research studies use questionnaires that ask for the respondent’s symptomatology.

Typically, there are three criteria that must be met:

“It’s not always exclusively an auditory event,” Sharpless adds. “One study I conducted found that about 27 percent of people experience visual phenomena as well. So instead of just hearing a loud noise, they might also see a flash of lightning or what looks like a TV tuned in between stations… visual static,”  he says.

Individuals with exploding head disorder will experience a loud noise or explosion during wake-sleep or sleep-wake transitions, causing abrupt wakefulness. Though people with exploding head disorder do not typically experience pain at all, some may report feeling some mild pain. Sharpless notes that any pain experienced is likely the result of shock or surprise. According to his research, other reported symptoms may include:

Data on exploding head disorder is limited, so it can be difficult to ascertain the exact cause. But there have been several hypotheses proposed.

“The one that seems most plausible involves a part of your brainstem called the reticular formation. This is responsible for helping us go to sleep, among other things,” says Sharpless. “It’s sort of like a computer, in that it goes through a series of steps to have us sleep. What we think happens during exploding head syndrome is that, instead of shutting down your auditory neurons, it causes them to fire all at once. So you’ve got this massive blast of neural activity.” says Sharpless.

“Another good theory is that certain people with ear problems, such as perilymph fistulas, experience EHS as well,” he adds.

“You can have something similar happen if you suddenly go off SSRIs [selective serotonin reuptake inhibitors], which are a class of antidepressants. Certain people who suddenly stop taking these medications will hear a whooshing noise that is similar to EHS, but it is likely not the same thing,” he notes.

When To See A Doctor

“There’s no FDA-approved treatments,” says Stahl, who also notes that no treatment is typically required. In fact, in some instances, the condition may resolve itself and go away entirely on its own.

When intervention is required, Stahl says “we usually work on good sleep practices. Making sure that someone is getting sufficient sleep, usually seven to nine hours for most adults, talking about relaxation techniques, deep breathing, and stress reduction, and usually those factors alone significantly reduce, if not completely resolve, the symptoms.”

There is some evidence to suggest that certain medications may be helpful in preventing or reducing the severity of exploding head disorder symptoms. However, the research is based on individual case studies and therefore data is limited.

For some people, knowing that exploding head disorder is a relatively benign condition may be enough for symptoms to improve or for EHD to go away on its own. On the other hand, if your episodes persist and impair your quality of sleep or cause you distress, you may want to consult with a doctor to find out whether you have an underlying condition or suffer from another sleep disorder. If so, getting treatment for those other conditions may also help to prevent EHD episodes.

For many people, exploding head disorder isn’t necessarily a cause of concern — it’s a benign condition that can occur infrequently and resolve itself over time. However, if the disorder is causing you to lose sleep or experience increased anxiety, you should seek help from a medical professional.