The Ultimate Guide to Napping

Napping may be one of the most controversial topics in the world of sleep. Take a look online and you’ll find sleep specialists who extol the benefits of naps, and others who proclaim that naps can disrupt nighttime sleep.

So, what’s the truth about naps? Are they bad for our sleep patterns, or good? Does it all depend on our individual sleep needs, or are there rules we should follow when it comes to daytime dozing?

What Is a Nap?

A nap is a brief period of sleep that takes place at a time other than the usual sleep period. Most people tend to take naps during the day, particularly in the afternoon during the natural dip in circadian rhythm. (1)

A nap is considered a type of biphasic sleep, which means sleep that occurs in more than one time period. Given this broad description, a nap is not necessarily defined by duration or time of day. 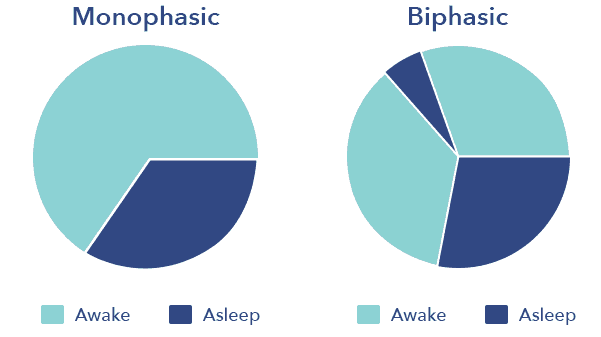 Napping has been practiced across cultures for thousands of years. 85% of mammalian species sleep in two or more phases rather than a single period. For a significant portion of recorded history, human beings slept in two four-hour stages, one that began shortly after dusk and another that began later at night. Sleep maintenance insomnia — repeated waking during the night — may be related to the biological tendency to sleep in phases. (2)

Napping became popular hundreds of years ago in warm climates such as Spain, where the “siesta” has long been tradition. The word siesta comes from the Latin term sexta hora, meaning sixth hour. The sixth hour refers to the period approximately six hours after dawn, when temperatures are warmest and outdoor work is most difficult.

While the siesta has never been a cultural tradition in the United States, napping is becoming increasingly popular as Americans learn more about the importance of sleep.

Sleep that takes place once per day, generally for seven to nine hours.

How Long is a Nap?

A nap can last for nearly any length of time, from a few minutes to several hours. Depending on duration, naps have different effects on the body and brain. 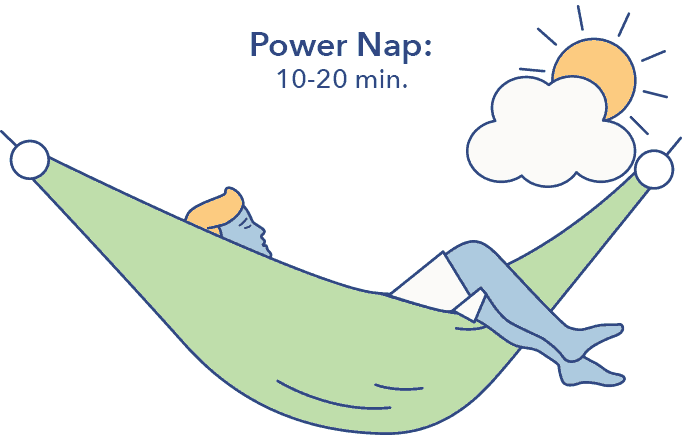 A power nap is usually defined as a short period of rest with the objective of improving alertness or physical endurance. These types of naps range from between ten and thirty minutes long.

Also called Stage 2 naps, power naps are typically long enough to cycle through the first two stages of sleep, known as N1 and N2. N1 and N2 are considered the lighter stages of sleep, and take about twenty minutes to complete. (3)

Due to their brief length, power naps do not reach the stage of deep, slow-wave sleep, referred to as N3. Waking from a power nap is usually quick, with little disorientation or residual grogginess.

What’s the difference between N1 and N2 sleep? N1 is the transitional stage between wakefulness and sleep. N2 is deeper, more difficult to wake from, and characterized by unique brain waves called sleep spindles and K-complexes. (4)

Naps longer than twenty to thirty minutes allow the body to enter slow wave sleep, or N3. N3 is the deepest and most restorative stage of sleep, and is characterized by the following changes to the body and brain:

Slow wave sleep dominates the sleep cycle during the earlier part of the night, while REM sleep becomes more dominant toward morning. When a nap is long enough to cycle through the first two sleep stages to N3 sleep, the sleeper becomes more difficult to wake. (6) 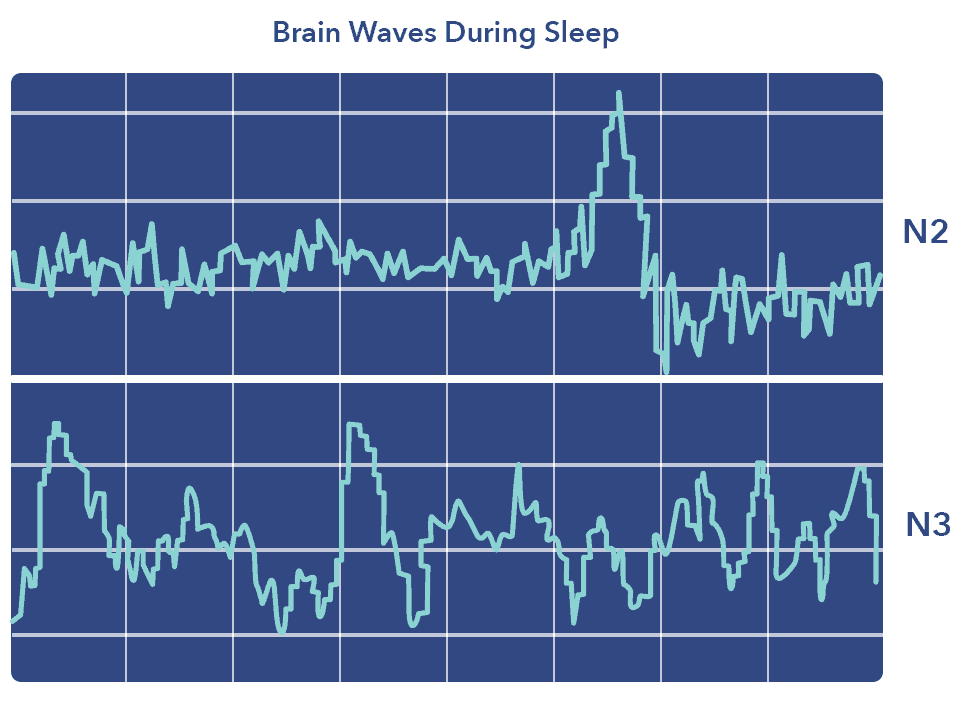 Because blood is needed by the muscles to fuel healing and other immune activity during N3 sleep, less blood becomes available to the brain. If waking occurs during N3 sleep, this lack of blood to the brain can lead to what’s known as sleep inertia. Sleep inertia is characterized by difficulty waking, impaired cognitive ability and physical dexterity, and persistent grogginess.

Though sleep inertia usually dissipates quickly after waking in the morning, it can persist for thirty minutes or even longer after waking from the N3 stage of sleep. Naps that allow the body to cycle through all four stages of sleep including REM do not typically cause the same sleep inertia common with naps that end during N3 sleep.

Q: What is memory consolidation? A: The cognitive process of stabilizing and storing memories during sleep.

The Benefits of Napping

Recent research on the physical and cognitive effects of napping have shown significant benefits for those who have the time to sleep during the day. Naps increase alertness, significantly reduce daytime sleepiness, boost energy and mood, and improve cognitive functioning. (7)

One study showed that a nap that includes all four stages of sleep, including REM, had the same benefit on certain types of learning as a full night of sleep. Logical reasoning is also enhanced by longer naps, as are problem-solving skills. Naps that include REM sleep are typically about ninety minutes long. (8) 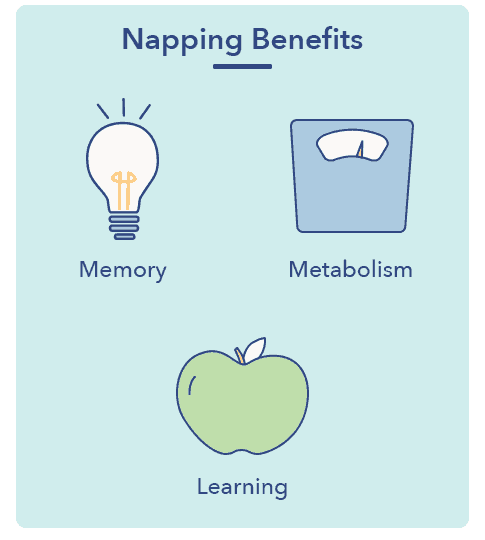 Though brief, a twenty to thirty minute power nap can be sufficient to restore cognitive function and dispel the sleep drive, the desire to sleep that builds gradually over the course of the day. The sleep drive typically peaks in the early to mid-afternoon, and again later at night.

Because the process of memory consolidation begins during N2 sleep, a power nap can also boost memory and help facilitate learning. (9) Just twenty minutes of sleep can reverse the impact of poor sleep on metaboilsm and hormonal function, allowing fat storage and other essential processes to return to normal.

A slow wave sleep nap has unique cognitive and physical benefits, particularly for those suffering from sleep deprivation. (10) In addition to improving alertness and dispelling the sleep drive, longer naps can help restore the cognitive skills used for decision-making and recalling certain types of memories, such as names and faces.

A recent study revealed that naps of approximately fifty minutes can reduce blood pressure as effectively as medications, with benefits accruing as nap duration increases.(11)

The Downside of Napping

The health benefits of naps are clear. Even a brief period of sleep during the day can restore energy and alertness, improve mood, and reduce the risk of accidents. But there is a downside to napping. For those who have persistent trouble falling asleep or staying asleep at night, one of the benefits of napping may also be a drawback.

Taking a nap, even one of short duration, can significantly lower the sleep drive. Lowering the sleep drive in the afternoon may lead to difficulty falling asleep, staying asleep, and falling back to sleep at night. Though chronic insomnia sufferers may feel sleepy during the day, taking a nap can be counterproductive for those diagnosed with the disorder.

The cognitive behavioral therapy for insomnia protocol expressly forbids napping for people suffering from insomnia for three months or longer. In fact, less time in bed is suggested for people with insomnia to improve sleep efficiency and help break the association between the bed and difficulty sleeping. This limitation of time in bed is called sleep restriction, and is considered one of the most effective components of cognitive behavioral therapy for insomnia.

What is a Caffeine Nap?

Caffeine helps to reduce sleepiness and increase alertness and reaction time through its effect on adenosine receptors. Adenosine acts as a neuromodulator, and is a byproduct of energy use by the brain and body. (13) Adenosine accumulates over the course of a day, gradually increasing the drive to sleep. Caffeine blocks the receptors for adenosine, reducing sleepiness and increasing alertness. 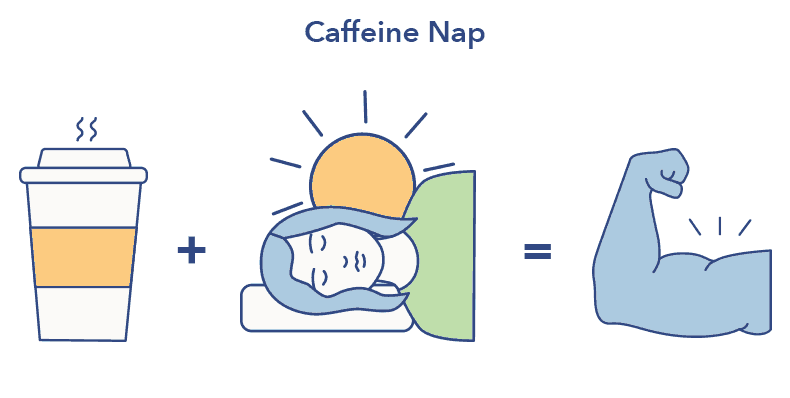 A neuron that uses chemicals in the body to regulate other neurons.

A nap is an intentional period of rest with numerous benefits to mood and well-being. A nap typically lasts between ten and thirty minutes, while a microsleep is an unintentional lapse into sleep that often lasts only seconds. A microsleep can occur in public, at work, or while driving, significantly increasing the risk of accidents and danger to others.

Microsleep episodes are frequently caused by sleep deprivation, working non-traditional hours, or medication side effects. A microsleep occurs when the brain shifts unexpectedly between the wake and sleep states, and parts of the brain shut down.

Symptoms of a microsleep range from closing eyelids to head jerks, which can indicate a dangerous level of sleepiness. Other signs of microsleep include loss of attention, a feeling of unusual sleepiness, and reduced muscle tone. A blank stare and eye-rolling are other common indicators. A person who experiences the feeling of “jerking awake” without intending to fall asleep may have just slipped in and out of microsleep.

Microsleep episodes can be avoided by taking a nap, getting sufficient sleep at night, or changing to a medication that causes less drowsiness.

If you aren’t accustomed to napping but would like to reap the benefits of biphasic sleep, here’s how:

Naps may be tracked by various sleep-tracking devices worn on the body. This data can reveal the exact length of each nap and its effects on the body to help determine which type of nap is best for you.

Napping is generally healthy for the brain and body, and can restore cognitive function as well as alertness. Power naps of twenty to thirty minutes in length are most effective for reducing daytime sleepiness and boosting energy, while longer naps that incorporate slow-wave sleep or REM sleep can have a significant positive impact on the capacity to learn and remember.

Naps are not recommended for those who have chronic insomnia and conditioned sleep-related anxiety. Sleep specialists generally recommend that people with insomnia restrict their time in bed to help regulate the circadian rhythm and create positive associations between the bed and sleep.

Once frowned upon, napping is enjoying a resurgence as a healthy activity that improves well-being. Due to the effect of napping on productivity and morale, some employers are even making napping part of a sleep-positive workplace culture. As more people understand the importance of sleep, napping may take its place alongside sufficient nighttime sleep as a cornerstone of good health.