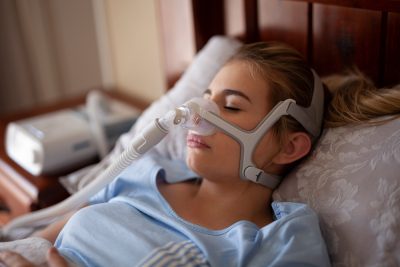 Like many other conditions, from heart attacks to hormonal issues, obstructive sleep apnea (OSA) is detected differently in women than men — and because of that, it’s often under-detected. Though men and women’s physiology might appear similar at first glance, more and more research is showing how many conditions manifest differently.

When it comes to sleep apnea, a 2020 study published in the journal Sleep, points to significant differences: Women’s breathing is more stable, their airways don’t collapse as easily, and they wake up more after the airway starts to close (when their breathing pauses).

Despite symptoms that may show up less dramatically in women than men, women concerned they might have sleep apnea should watch for some telltale signs, according to Dr. Peter Polos, MD, PhD, FCCP, FAASM, sleep medicine specialist and sleep expert for Sleep Number.

“[OSA] occurs when your throat muscles relax and your airway narrows or closes, which can momentarily stop you from breathing. Snoring is one of the main symptoms associated with obstructive sleep apnea or may be associated with respiratory-related arousals from partial obstruction of the airway,” he says.

Here’s what women should know about the potentially life-threatening, and almost always sleep-altering condition.

While women can be diagnosed with sleep apnea at any stage of their lives, menopause is a likely time to start experiencing symptoms, Polos says, pointing to a study that shows 20 percent of women develop OSA during menopause.

“At the time women develop menopause, their estrogen and progesterone (a hormone that’s associated with inducing sleep) levels decline, which is a major contributor to disturbed sleep. Changes in weight during and after menopause can also be a factor behind a sleep apnea diagnosis.” Additional research confirms that age 45 or older is typically the starting point for OSA in women. In fact, 47 percent to 67 percent of post-menopausal women are reported to develop sleep apnea.

But menopause — and perimenopause, for that matter — isn’t the only time women might experience major hormonal and potential weight changes, all of which can increase the risk of OSA. Polos says that women who have recently gained significant weight due to pregnancy might also be more at risk.

“Weight gain during pregnancy can also lead to sleep apnea due to the extra tissue in the neck area that can constrict airflow,” he says. “Higher levels of estrogen during pregnancy can impact women’s airways and make it harder to breathe during the night while increased levels of progesterone can cause muscles in the airway to relax, leading to sleep apnea in some cases.”

Put simply, women may find they’re most vulnerable to developing sleep apnea during phases of hormonal and weight fluctuations.

Signs And Symptoms Of Sleep Apnea For Women

While snoring has the biggest reputation as a classic symptom of OSA, and rightfully so, there are other signs and symptoms women can watch for. Dr. Po-Chang Hsu, medical advisor for Sleeping Ocean, says that additional symptoms include:

Any of these symptoms should be reported to your physician.

Hsu says, “Sleep apnea symptoms aren’t always as obvious in women as in men. Many women don’t snore that loudly, which often makes it hard to suspect sleep apnea in the first place. That’s why they should pay attention to the ‘post-sleep’ symptoms.”

Women might not associate with what one study labels a traditionally “male disease,” especially since their symptoms might be different, and they might have less severity. Because prevalence rates are lower in women, often they are underdiagnosed, and their sleep apnea indexing scores don’t meet the same level as men’s. They also might have more specific symptoms like restless leg syndrome, hallucinations, and nightmares, which they and their health care providers might not immediately connect to OSA.

FAQ: What happens when sleep apnea is left untreated?

Undiagnosed sleep apnea can have a range of detrimental mental and physical health impacts for women. These include hypertension, stroke, heart issues including heart attacks, diabetes, obesity, and more, according to Cleveland Clinic. This is because there are repeated phases of low oxygen during sleep, changes in carbon dioxide levels, and pressure changes in the chest that can impact the heart. In addition, untreated OSA can cause inflammation. This is why any women who suspects they might have the issue shouldn’t delay care, even if they aren’t sure of the issue.

Treatment And Prognosis For Women With Sleep Apnea

Like with many illnesses and conditions, treating sleep apnea might involve a multi-pronged approach with your medical team. They might advise that you introduce lifestyle changes to reduce Body Mass Index (BMI), sleep elevated to reduce airway pressure, and to use a CPAP machine, considered one of the most standard and effective means of treating OSA, Hsu says. There are also alternatives to CPAPs including some procedures that some patients with severe OSA might consider with their physician to more permanently treat the issue if other interventions haven’t worked. Here’s what your doctor might recommend:

If weight gain (potentially due to hormonal changes through perinatal or menopause years) is part of the problem, your doctor might recommend diet and exercise, to lose weight and ease symptoms of OSA. They also might simply recommend changing sleeping positions.

The gold-standard and most commonly prescribed treatment is the PAP machine, which administers pressure to the airway to support it and keep oxygen flowing properly, preventing airway collapse commonly associated with OSA.

Some dental experts might work with your medical provider to recommend a device that thrusts the jaw forward, maintaining your airway’s proper position, as a potential OSA treatment.

Some studies have shown therapy of the mouth, throat, facial muscles, and nearby areas can improve sleep apnea but around 50%. Speak to your doctor about whether this specialized physical therapy might be an option for you.

“Generally, sleep apnea is considered a ‘male illness’ as it involves loud snoring that’s more characteristic of men,” Hsu says. “Because of such stereotypes, women are less likely to seek diagnosis and treatment when experiencing sleep apnea symptoms.” However understated the symptoms may be, it’s essential for women with sleep apnea to achieve a safe and restful night’s sleep—just like men—for the sake of their overall health.