The Side Effects Of Untreated Sleep Apnea 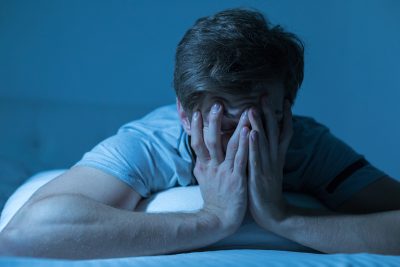 If you’ve ever woken up gasping for breath or had a loved one notice your breathing stop while you slept, there’s a chance you have sleep apnea.

Sleep apnea affects about one billion people around the world, and experts say 17 percent of women and 34 percent of men in America have the condition.  Although it affects almost one in five people, many of them don’t know they have it — it’s estimated that more than eight out of ten people with sleep apnea haven’t been diagnosed.

Carlos Nunez, MD, the Chief Medical Officer at ResMed echoes Morris’s statement. “People with sleep apnea are suffocating each night while they sleep, and many have no idea,” he says.

If suffocation isn’t warning enough, there are a range of side effects that have been linked to untreated sleep apnea — read on to learn more.

What Are Common Symptoms Of Sleep Apnea?

“The symptoms of sleep apnea can be divided into daytime and nighttime symptoms. All of them can negatively influence a person’s quality of life and professional performance, increasing, for instance, their risk of vehicle accidents,” says Pien Bosschieter, MD, PhD,  physician and postdoctoral fellow studying sleep apnea at the University of Stanford.

Nighttime symptoms may include:

Symptoms progress gradually, and many patients underestimate the severity of their sleepiness until their daytime function and activities are severely affected, Bosschieter says.

Additionally, research published in the Journal of Clinical Sleep Medicine found that women had more severe daytime symptoms than men with a similar profile. On top of that, experts found that women are more likely to be under-diagnosed because their symptoms don’t always follow expected patterns, making it that much more important for women to get tested if they suspect they have sleep apnea.

The Effects Of Untreated Sleep Apnea

Untreated sleep apnea can have wide-ranging effects on your health and longevity — it disrupts several systems and functions in your body, including the nervous system, immune system, and your metabolism.

When these systems aren’t working properly, it’s harder for your body to heal, manage energy, or eliminate threats. Without those vital restorative processes,  widespread damage in the body’s organs and tissues can occur, eventually leading to diseases.

“Many people don’t realize that sleep apnea not only impacts your quality of sleep and prevents you from getting proper rest, but can have additional devastating consequences if it goes undiagnosed and untreated,” says Nunez. “Untreated sleep apnea can negatively affect your energy, mood, relationships, as well as your ability to work and drive safely in the short term. And in the long term, it is linked to other chronic and life-threatening conditions, including high blood pressure, heart disease, stroke, and Type 2 diabetes,” says Nunez.

We dig a little deeper into some conditions linked to untreated sleep apnea below.

Researchers have found that people with moderate to severe sleep apnea were more likely to develop Type 2 diabetes even if they didn’t have any other risk factors.

Researchers think inflammation, low oxygen levels, and the way sleep apnea disrupts nervous system function are responsible for the increased risk. They also found that people with diabetes and sleep apnea had difficulty controlling their blood sugar and were more likely to have complications.

Researchers have found that people with sleep apnea were possibly more likely to have cancer than those without the condition. Another study found that the more severe the sleep apnea was, the higher the risk of tumors and cancer.

Although the exact mechanisms are unclear, sleep apnea causes malfunction of the nervous system and immune system, which can make it harder for your body to identify and eliminate cancerous cells.

It’s important to note that having sleep apnea doesn’t mean there’s a definite cancer diagnosis in your future, but the potential for an increased risk does highlight the importance of testing and treatment.

Sleep apnea has been identified  as an independent risk factor for stroke. Researchers also found that untreated sleep apnea could lead to a recurrence in patients with previous strokes.

Sleep apnea triggers the release of chemicals that cause inflammation. These chemicals damage blood vessels, which can eventually cut off blood supply to the brain, causing a stroke.

Increased Risk Of Heart Attacks And Other Heart Diseases

We mentioned that sleep apnea can lead to damaged blood vessels in the brain and cause a stroke; it can also damage the blood vessels supplying the heart, which can cause a heart attack.

In addition, the restricted access to oxygen that occurs with sleep apnea can lead to a higher risk of obesity, diabetes, and hypertension, all of which are risk factors for heart disease.

Though the relationship between sleep apnea and glaucoma is still relatively unclear, research has shown that people with sleep apnea may have an increased risk of developing the condition, which can cause blindness.

Sleep apnea may also make people more likely to gain weight. Researchers think not sleeping well at night and daytime sleepiness alters your metabolism — how your body stores and uses energy — leading to weight gain. Sleep apnea also changes the way your body produces hormones related to appetite and satiety: leptin, a hormone that promotes feeling satisfied after meals, is reduced, while ghrelin, a hormone that stimulates hunger, is increased.

A study published in the BMJ Open Respiratory Research Journal found people with sleep apnea were two times more likely to have sudden deaths than their noneffected counterparts.

Researchers think this is related to sleep apnea’s effects on the body including disrupting nervous system function, increasing chronic inflammation, and compromising the immune system. As a result, the heart is exposed to stressors that can cause sudden death.

Once again, the importance of treating sleep apnea for a long and healthy life is clear: Experts estimate that untreated sleep apnea can reduce life expectancy by more than a decade.

Though all of this may seem scary, the good news is sleep apnea is incredibly treatable. A doctor can diagnose the condition — they may ask questions about your sleep, mood, energy levels, and how long you have had symptoms. Doctors may check your blood pressure, heart rate, and weight.

Additionally, they may ask you to undergo tests such as polysomnography or home sleep tests.

These tests usually measure your blood pressure, heart rate, airflow, breathing pattern, and blood oxygen levels while you sleep. You can have a relative or anyone who lives with you record these values for you.

The treatment for sleep apnea ranges. Doctors may recommend lifestyle changes, surgery, treatment of any accompanying conditions, and the most popular treatment device, CPAP.

Lifestyle changes. Your doctors may recommend lifestyle changes to control your symptoms. This could mean tweaking your diet or exercising more to help shed any extra pounds that may be contributing to the condition.

Oropharyngeal exercises. Oral motor exercises can improve the posture and strength of your facial muscles, which may lead to a reduction in snoring and improvements in all sleep indices. These exercises include the lip trace, chin nods, cheek puffs, and more.

Surgery. Sleep apnea caused by airway obstruction can be treated by surgery, though the exact procedure depends on the part of the airways obstructed. It’s worth noting that surgery isn’t an overly common recommendation, and qualifying for it may be unlikely.

Of course, new research and treatment options are always in the works — most recently Inspire, the only FDA-approved implantable device for sleep apnea treatment, has been making waves for its revolutionary approach to treating sleep apnea.

While the side effects for untreated sleep apnea are scary, the good news is there are effective treatment options that can help protect you from developing those conditions. If you suspect you have sleep apnea, talk to your healthcare provider for testing and treatment plans — sleep apnea is incredibly treatable, so there’s no reason to suffer in silence.

Nsisong Asanga is an editor and freelance writer with work published by WebMD, VeryWell Health, Parents, SELF and other platforms. You can follow her on Twitter @NCbassey.