Why Do We Have Nightmares? 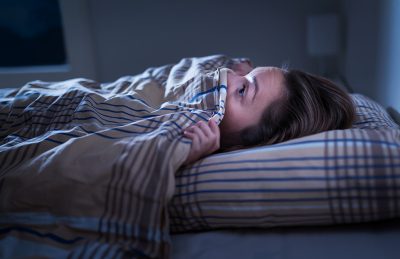 If you’ve ever found yourself startled awake in the middle of the night, heart pounding and soaked in sweat, you know what it’s like to have a nightmare. These vivid, often terrifying dreams are distinguished from standard bad dreams because they often manage to wake us from a sound sleep. But why do we have nightmares, and more importantly, what can be done to avoid them? We spoke with two certified sleep experts for their input on keeping nightmares at bay.

“Nightmares are distressing dreams that generally occur during REM sleep and that often result in awakening,” says Dan Ford, a sleep psychologist specializing in insomnia treatment for The Better Sleep Clinic. They often trigger strong emotions, such as fear, guilt, anxiety, sadness, or anger.

What Is Nightmare Disorder?

While nightmares themselves are no one’s idea of a good time, they’re generally considered fairly benign sleep events. Nightmare disorder, on the other hand, is something more serious, with nightmares occurring much more frequently. “Nightmare disorder is a REM sleep parasomnia,” says Ford. “It is characterized by repeated episodes of extremely disturbing dreams that usually involve threats to survival or safety and are well remembered upon waking.”

What’s more, “the nightmares or sleep disturbances they cause are impairing in either social, occupational, or some other important area of the sufferer’s life,” he says. In other words, a symptom of this disorder is highly distressing sleep events that affect people even when they’re awake. And it creates a pretty vicious cycle — night after night of disrupted sleep leaves people less able to manage daytime stress, increasing the chance of more nightmares. The good news is that nightmare disorder can be effectively treated by identifying potential triggers, such as an underlying health condition or stressor, and then tailoring treatment to resolve them.

Why Do We Have Nightmares?

One of the most suspected reasons for nightmares is what we’re dealing with in our daily life. “The general scientific evidence points towards our dream content having a relatively strong relationship to the concerns and stressors of our waking life,” explains Ford. But carrying over lingering feelings from stressful events in our day isn’t the only thing that could be triggering nightmares.

“Our levels of well-being during our waking lives correlate with specific types of dreams, such as nightmares and recurring dreams,” says Ford. If we’re dealing with higher levels of negative emotions throughout the day, we could find ourselves having a nightmare or two.

People with mental health conditions, including post-traumatic stress disorder (PTSD), anxiety, and depression, are more likely to experience nightmares. In fact, nightmares are a symptom of PTSD.

Antidepressants in particular are known to impact sleep, including causing nightmares.

Experiencing terror, anger, anxiety, or other heightened emotions while we’re dreaming can definitely take its toll. “Nightmares disrupt and fragment sleep, negatively impacting sleep quality,” Ford says. “And depending on how long it takes an individual to get back to sleep after a nightmare, nightmares can decrease sleep quantity too.” In some cases, people are actually reluctant to fall asleep because they’re worried about the possibility of a nightmare, which also means less sleep.

As unpleasant as they are, nightmares are pretty common. According to the American Academy of Sleep, up to 50 percent of small children experience nightmares — and they’re scary enough for a wake up call to mom or dad. Luckily, nightmares tend to peak and then decrease around age ten.

The Difference Between Nightmares And Night Terrors

Both nightmares and night terrors are individual sleep phenomena, even if people tend to mix them up. “Because a nightmare is ‘terrifying,’ people assume the terms ‘nightmare’ and ‘night terror’ are interchangeable,” explains Ford. The difference largely comes down to the specific stage of sleep in which they occur.

While nightmares generally take place during REM sleep, night terrors take place in non-REM sleep. “Night terrors are arousals from NREM sleep characterized by episodes of sudden terror, often starting with a loud vocalization, such as a scream,” says Ford. “The individual appears to be in intense fear and there is arousal of the stress system, but the person is still asleep.”

There’s one other factor differentiating nightmares and night terrors. “Nightmares are remembered, whereas night terrors are not,” says Ford. That means we tend to feel upset or unsettled about a nightmare when we awaken, but aren’t affected in the same way by a night terror simply because we don’t remember it.

In fact, night terrors tend to be more distressing for those who witness them than those who have them. People having a night terror can exhibit symptoms like thrashing, screaming, sweating, even sitting up in bed and opening their eyes — pretty unsettling if you’re the one watching it happen!

Mental health conditions are commonly associated with nightmares, and it often creates a challenging cycle. The conditions themselves may cause nightmares, which can contribute to or aggravate the disorders.

Depression and anxiety can make nightmares more likely and more intense. “Because you consolidate memories and process your waking emotions while you sleep, people with high stress and mental health conditions are more likely to have nightmares,” says Stephen Light, certified sleep science coach and CEO/co-owner of Nolah Technologies. People with these conditions are dealing with heightened emotions during their waking hours, which puts them in a more fragile state.

Treating these conditions can help resolve the emotions that may trigger nightmares. Treatment options such as cognitive behavioral therapy, relaxation techniques, and even regular exercise are recommended for managing these sorts of disorders.

Nightmares are common in people diagnosed with PTSD — as many as 80 percent experience regular nightmares. In some cases, the nightmares are of the traumatic event itself. In others, the setting or scenario is different, but the emotions associated with the trauma are the same.Interestingly, nightmares that begin after trauma aren’t only more frequent and intense, but more likely to occur in non-REM sleep. They may also involve vocalization, such as shouting, or physical movement.

People experiencing nightmares caused by PTSD are advised to seek professional help for specific treatments, which includes imagery rehearsal therapy. This form of therapy teaches people how to change the endings of their nightmares while they’re awake to lessen the threat and ultimately, change the outcome of the nightmare itself.

How To Avoid Having Nightmares

“There is a fair amount of evidence suggesting nightmares are a continuity of negative emotion from our waking lives,” explains Ford. “Therefore, proactively dealing with the stressors of our waking lives, managing our mental health and emotions, and seeking out support for dealing with traumas would likely help reduce the likelihood of experiencing nightmares.” Activities like yoga, breathwork, and guided meditation are all worth a shot.

In addition to addressing daytime stress appropriately, improving your general sleep health and hygiene may also decrease the frequency of nightmares and wakeups, says Light.

It may also be wise to avoid scary movies or books before dozing off. And it’s wise to double check potential side effects of any medications you take. Some medicines affect REM sleep, which could lead to nightmares.

Common Nightmares And Their Meanings

For centuries, people have pondered the meaning of our dreams — and nightmares. Sigmund Freud’s book, “The Interpretation of Dreams,” is one of the most well-known texts on dream analysis and interpretation, but there are many ideas about the possible meanings of common dreams and nightmares.

“People have common nightmares because they have common stressors and cultural influences,” explains Light. The interpretations of those dreams and nightmares, however, tend to be highly personal. They’ll vary depending from person to person and what’s going on in their individual lives, but there are plenty of interpretations that are often used as blanket explanations.

“Work and school-related nightmares are extremely common because responsibilities and deadlines are a stressful part of the human experience,” adds Light.

When To Consult A Doctor

If you’re debating seeing a doctor over nightmares, that’s likely a sign that you should. Ford advises consulting a doctor when nightmares become distressing enough that they’re impacting your day-to-day life. Consider if you’re reluctant to go to bed for fear of nightmares or feeling excessively tired during the day.

No matter why you’re experiencing them, nightmares are unsettling, if not downright terrifying. But they’re considered a common sleep phenomena, and properly managing stress and anxiety in your waking hours could be the key to keeping nightmares at bay.