Everything You Need To Know About Caffeine Gummies 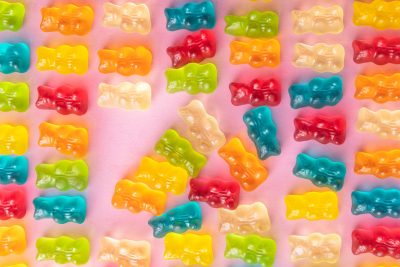 Coffee fans who live for that caffeine high so they can power through lengthy to-do lists have an alternative to the liquid stuff — and it’s not a pill. Caffeine gummies are a softer, chewier edible version of a cup of coffee, and they may or may not include additional ingredients for purported brain-boosting benefits. Here’s what to know about caffeine gummies, including how they work and whether they’re really a viable alternative to your favorite espresso.

What Are Caffeine Gummies?

As the name implies, caffeine gummies are gummy supplements that have been infused with caffeine, a plant-based substance that stimulates the nervous system and increases feelings of alertness and focus. Depending on the brand, caffeine gummies may include additional flavors, like chocolate and pumpkin spice, sweeteners, and extra nootropics intended for another boost of brain support (caffeine itself is classified as a nootropic). Since research shows that nine in ten Americans report consuming caffeine, with 75 percent of consumers doing so at least once a day, there’s clearly a market for this kind of gummy.

Are There Different Kinds Of Caffeine Gummies?

Different brands offer their own unique twist on caffeine gummies, so you can find them in all sorts of options. Some are fruit gummies with a caffeine infusion. Others are essentially condensed cold brew with a sweetener to offset the bitterness. Caffeine levels can vary, with some brands hawking high caffeine content. Some caffeine gummies are made with minimal or no added sugar or organic ingredients only.

Fair warning — there are different flavors of caffeine gummies, but in general, expect a very strong coffee taste and a wicked case of coffee breath!

How Much Caffeine Is In A Caffeine Gummy?

The amount of caffeine in these gummies varies. Generally, caffeine gummies have anywhere between 40 and 200 milligrams of caffeine per gummy. According to the U.S. Food & Drug Administration (FDA), an eight-ounce coffee has between 80 and 100 milligrams. That means a caffeine gummy can be the equivalent of half a cup of coffee or two full cups.

The FDA says there are no adverse effects in the consumption of up to 400 milligrams of caffeine a day, or between four and five cups of coffee. But everyone is different, which means your limit may be lower. Overdoing the caffeine can have all sorts of unpleasant effects, including insomnia, jitters, anxiety, nausea, and upset stomach, headaches, and a racing heart. If you’re planning on trying a caffeine gummy, be sure to check the label so you’re clear on how much caffeine you’ll be ingesting.

How Do Caffeine Gummies Work?

While caffeinated beverages, caffeine pills, and caffeine gummies all work the same way on the nervous system, there’s a timing difference. It takes about 45 minutes after consumption for the body to absorb caffeine, though it can peak in the bloodstream as quickly as 15 minutes — or as late as 2 hours — after consumption. When you drink a cup of coffee, the caffeine is absorbed in the digestive system, dissolved into the body’s fat molecules and water, and able to cross into the brain. But what about caffeine that you chew?

A study on caffeine-infused chewing gum determined that close to sixty percent of caffeine was absorbed within ten minutes and nearly 100 percent absorbed within 40 minutes. Chewing on gum — or a caffeine gummy — means caffeine absorbs through the mucosal membranes in the mouth, which is one of the fastest methods of absorption.

Though some people enjoy the ritual of having a cup of joe every morning, the process of chewing on a caffeine gummy is much faster than drinking coffee. Additionally, some enjoy the added benefit of controlled dosing since it’s a lot harder to estimate how much caffeine makes it into your morning cup.

Caffeine gummies from reputable manufacturers should be safe to consume, but it’s important to follow directions and avoid overdoing it. According to the FDA, toxic effects are possible if you down 1,200 milligrams of caffeine quickly. In fact, two recent deaths in the United States were attributed to pure, highly concentrated caffeine products. Since these products are often sold in bulk packaging, consumers have to measure out their own servings, which can lead to miscalculations — and serious side effects, including death.

That’s not the case with caffeine gummies from trusted brands. As long as you’re aware how much caffeine is contained in each gummy, you’re following directions, and you keep in mind other sources of caffeine (soft drinks, chocolate, tea, energy drinks, supplements), caffeine gummies should be safe to consume.

Parents should also be extra cautious about where they store caffeine gummies. They usually look just like candy, which is tempting for most children, and trusted sources like the  American Academy of Pediatrics advise against caffeine for children under 12 years old.

While drinking a cup of coffee can be as much about the ritual as it is about the energizing effects, a caffeine gummy is all about the end result. It’s a fast way to get a precise dose of caffeine, and it may be the easiest option if you don’t have the time to brew coffee or hit up your favorite coffee shop. Just remember to double check the label, follow the manufacturer’s directions, and only buy caffeine gummies from brands you trust.