Everything You Need To Know About Delayed Sleep Phase Syndrome 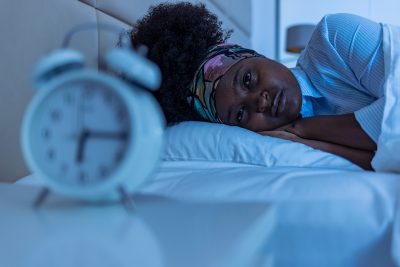 Night after night, the song remains the same. You turn out the lights, bid partners and pets a fond farewell, and settle in for a snooze. From time to time, however, there’s a scratch in the record. Instead of falling asleep quickly, you lay in bed trying to remember the lyrics to Lady Marmalade — probably for longer than you should!

The fact is, sleep eludes everyone from time to time. For some people, however, delayed sleep phase disorder typically turns the 20 to 30-minute sleep latency into two to three hours. Instead of being a blip on the radar, it’s another night dealing with a sleep disorder.

What Is Delayed Sleep Phase Syndrome?

In its simplest terms, delayed sleep phase syndrome (DSPS) is a misalignment of the body’s natural sleep-wake cycle (internal clock). While those who have DSPS have no trouble falling asleep, they consistently do so two to three hours later than the rest of us, and as a matter of course, they wake up later than us as well. Instead of falling asleep at 10 PM, someone with delayed sleep phase syndrome would more likely fall asleep around midnight or 1 a.m.

Outside of the delay in their sleep onset, those with DSPS sleep just fine as far as quality and duration are concerned — their timing is just off. Research has also shown that not only is the timing of their sleep off, but their “peak times of performance, body temperature, and hormonal rhythms” are delayed in relation to “societal norms.”

Leaning heavily into the night owl chronotype, people with DSPS find it difficult to synchronize their sleep schedules with the world around them, which is often in direct conflict with their personal and professional lives.

Of all circadian rhythm sleep disorders, delayed sleep phase syndrome is the most common, affecting as much as 0.15 percent of the population. Studies show that DSPS is more prevalent among teenagers and young adults than adults, and it’s equally distributed between men and women.

The exact cause of DSPS is still undefined, but current research shows that DSPS starts in adolescence, somehow coinciding with the biological shift or sleep delay that teens typically experience. From that, researchers hypothesize that some people simply carry that delayed sleep phase into adulthood, ultimately leading to sustained delayed sleep phase syndrome. And while that sounds like a pretty logical explanation of the disorder, it’s only one possible explanation.

Digging a little deeper, we find there could be a number of other factors at play when we look at the cause of DSPS, including genetics, other disorders or illnesses, and sleep hygiene.

While the genetic links of delayed sleep phase syndrome have yet to be definitively proven, the research shows that as much as 50 percent of DSPS patients have biological relatives with similar symptoms.

While depression, anxiety, and OCD are not thought to have a causal effect on delayed sleep phase syndrome, they do appear to be linked.

Like many sleep disorders, the habits you have concerning sleep can ultimately determine how well and how much you sleep, and it’s no different for DSPS. Again, while poor sleep hygiene may not cause delayed sleep phase syndrome, it can exacerbate your symptoms. Specifically, managing the amount of light you get throughout the day is key to managing the symptoms of DSPS. Ideally, you want to get more light (or sunlight) early on in your day and limit your exposure to light later in the day as you approach bedtime.

“Delayed sleep phase syndrome is most commonly diagnosed by [evaluating] a person’s symptoms,” says Nicole Eichelberger, a BSM Certified Sleep Expert. “For example, if they have trouble falling asleep at night and do not feel refreshed in the morning, this may be a sign of delayed sleep phase syndrome.” Other diagnostic tools include polysomnograms, sleep logs, and actigraphy.

Eichelberger tells Sleepopolis that beyond assessing the patient’s symptoms and taking a detailed history, polysomnograms or sleep studies can be an excellent diagnostic tool for DSPS.

“A sleep study […] involves sleeping overnight in a lab under controlled conditions. A technician monitors how much time it takes for someone to fall asleep, how long they spend in REM sleep, and how long it takes them to fall back asleep after waking up during their normal bedtime window. The results of this test can help determine whether or not someone has delayed sleep phase syndrome.”

If an overnight sleep study isn’t in the cards for whatever reason, sleep logs can prove to be quite helpful in diagnosing delayed sleep phase syndrome as well. Just as it sounds, the patient themself would be tasked with keeping a diary of their sleep habits, including their sleep habits around bedtime, what time they go to bed, the quality of their sleep, what time they wake, etc. Sleep logs are usually documented over a two-week period, and they usually provide enough information for doctors and sleep specialists to make a diagnosis.

Actigraphs are another tool your doctor may use for diagnosing DSPS. Actigraphy involves wearing a device on your wrist that looks and feels like a watch. But instead of keeping time, they keep track of your sleep and wake patterns.

Eichelberger tells Sleepopolis that other symptoms include:

The endgame for the treatment of delayed sleep phase syndrome is to recalibrate your sleep schedule, bringing it back in line with societal norms. And like many sleep disorders, there may not be a one-and-done remedy. In many cases, treating DSPS may involve one or more of the following.

With chronotherapy, your doctor or sleep specialist will lay out a plan to tweak your sleep schedule. This involves advancing your internal clock in small increments until you’re back in sync with the world around you.

According to Eichelberger, “Another common treatment for delayed sleep phase syndrome is bright light therapy, which involves sitting near bright lights for 30 minutes or so each morning when you wake up. She goes on to say, “This helps reset your circadian rhythm so that you feel more alert throughout the day instead of feeling groggy until noon every day.”

A few adjustments to your sleep hygiene could be your ticket out of DSPS.

“Another treatment [for DSPS] is melatonin, [the] hormone that helps regulate sleep cycles,” says Eichelberger. She notes that it’s important to take melatonin at the right time of day — the general advice is typically to take it one to two hours before bed — for it to work properly.

Eichelberger tells Sleepopolis that behavioral and cognitive therapy are excellent treatments for delayed sleep phase syndrome. “Cognitive therapy teaches people how to change the way they perceive their sleep and wakefulness cycles (which can help them get more in tune with their natural circadian rhythm), while behavioral therapy also helps people learn about their body’s natural rhythms and how to adjust their schedules in order to match them.”

Delayed sleep phase syndrome is when your internal clock, which controls your sleep and wake cycles, doesn’t work properly. Those with DSPS typically fall asleep two to three hours later than people with normal sleep cycles. As a result, they struggle to wake up at socially acceptable times. The irregular timing of sleep schedules tends to conflict with most normal routines, and the pressure to keep up can lead to short sleep and sleep deprivation.

Though there is no cure for delayed sleep phase syndrome, treatments like chronotherapy, cognitive behavioral therapy, and medication can help you manage its effects.