The Difference Between Nightmares And Night Terrors 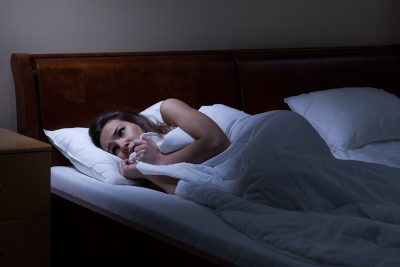 Nightmares are disturbing or distressing dreams that are unpleasant enough to wake you up. “They’re different from bad dreams, which you sleep through without disruption,” explains Stephen Light, certified sleep science coach and CEO/co-owner of Nolah Technologies. “Nightmares may be vivid or hazy, short or long, but all cause negative feelings upon wakeup, like fear, anxiety, confusion, sadness, disgust, or other negative emotional responses.”

Related: Why do we have nightmares?

What Are Night Terrors?

Night terrors are similar to nightmares in that they appear to have disturbing or distressing content. But unlike a nightmare, they don’t usually wake you. “Instead, you remain asleep, experiencing psychological distress and having a physical response,” Light says. “People are usually difficult to wake during night terror episodes and exhibit symptoms like heavy breathing, an increased heart rate, sweating, flushed skin, screaming, thrashing, sitting up in bed (sometimes with eyes open and pupils dilated), and sleepwalking.”

Sounds terrible, right? Here’s the interesting part — people who experience night terrors don’t usually remember anything in the morning. Children in particular rarely remember these episodes. That’s why night terrors may actually be more disturbing to family members or those who witness them than they are to the person experiencing them.

Research shows that night terrors are most common in children ages three to seven. They usually stop by age ten, and episodes are pretty equally split between both genders. While adults can also experience night terrors, it’s not nearly as common — and worth watching closely.

“Night terrors are considered more serious than nightmares among adults and are classified as a parasomnia,” says Light. “With children, both nightmares and night terrors are fairly common. They’re generally not cause for concern unless they consistently disrupt sleep, lead to self-harm, or if sleepwalking puts your child in unsafe situations.”

Research finds that night terrors tend to run in the family — they have a strong genetic link. Adults who experience sleep terrors are also more likely to have a history of mental health conditions, such as bipolar disorder and certain depressive or anxiety disorders.

Similarities Between Nightmares And Night Terrors

Both are forms of intensely bad dreams, but our tendency to use the terms interchangeably may come down to semantics. “Most people don’t know they refer to two different sleep phenomena, and because a nightmare is ‘terrifying’ people assume the terms ‘nightmre’ and ‘night terror’ are interchangeable,” says Dan Ford, a sleep psychologist specializing in insomnia treatment for The Better Sleep Clinic.

People tend to lump nightmares and night terrors into the same category, but there are specific differences between the two that extend beyond whether or not you can remember them in the morning.

One of the main differences between nightmares and night terrors is when they occur. “Nightmares typically occur during the REM sleep phase and later in the night,” says Light. “On the other hand, night terrors usually happen earlier in the night and during slow-wave (deep) sleep, the third NREM stage.”

That’s why we tend to remember nightmares, but not night terrors.

According to Light, people may be more prone to nightmares if they’re experiencing stress during their waking hours. “Stress, anxiety, unresolved social situations, and big life changes can all lead to nightmares, making them quite common for kids and adults,” he says.

People with mental health conditions, including anxiety, depression, post-traumatic stress disorder, obsessive-compulsive disorder, and bipolar disorder are also at a greater risk of having nightmares. The same is true for those who have sleep disorders or tend to experience disrupted sleep. Pregnancy and hormonal changes in general can also be a catalyst for nightmares.

Finally, some medications, including specific antidepressants, can cause nightmares.

As for night terrors, exact causes are largely unknown. Still, according to John Hopkins Medicine, sleep deprivation, emotional distress, and fever may all be triggers. And there are other possibilities too. “Night terrors in adults are generally thought to be caused by things that disturb/fragment sleep, causing partial arousals from sleep, which are where the terrors occur,” says Ford. “Things that disturb sleep are things such as alcohol, nicotine, caffeine, other sleep disorders such as obstructive sleep apnea, stress and potentially medications.”

Family history and genetics can also play a role. In fact, if you have night terrors, there’s a 96 percent chance that a family member does too.

Ford says that in children specifically, sleep terrors are thought to be part of the maturation process.

Is A Nightmare The Same As A Bad Dream?

Nightmares can be described as a bad dream, but they’re much more distressing. “While nightmares awaken you from sleep, ‘regular’ bad dreams do not,” says Light. “Nightmares tend to be more intense and scarier in nature — alarming enough to wake you. Bad dreams are unpleasant, but not necessarily frightening.”

Sleepwalking is a type of sleep disorder in which you may sit up in bed, walk around, or perform other physical movements all while you’re asleep. Like night terrors, sleepwalking tends to happen during deep sleep, though not always. But contrary to popular opinion, “behaviors during a sleepwalking episode aren’t informed by your dreams, meaning you don’t ‘act out’ your dreams,” explains Light.

Actually, you’re unlikely to move much at all during a nightmare. “Nightmares are vivid and distressing dreams that occur in REM sleep,” clarifies Ford. “During REM sleep the body experiences atonia, a kind of muscle paralysis, and therefore the nightmare sufferer is not typically able to act out dreams and walk around.”

Nightmares are frightening no matter how old you are, but they can be especially distressing for children, who may be less equipped to deal with them. Here’s how to help a child after a nightmare, including those who are reluctant or downright fearful of going to sleep because of them.

There are treatment options for both nightmares and night terrors if they’re affecting your sleep quality or amount. “Treatments focus on two areas: addressing physiological distress during your waking life, and alleviating sleep disruptions to improve your overall sleep quality,” says Light. Usually, these goals are accomplished with therapy and lifestyle changes.

Cognitive behavioral therapy (CBT) is often used to help manage stress, anxiety, depression, or other psychological conditions that are causing nightmares or night terrors. The American Academy of Sleep Medicine recommends a specific type of CBT known as imagery rehearsal therapy (IRT), which teaches people how to change nightmares while they’re awake to make them less threatening. By rehearsing the new ending every day, people are able to incorporate it into their dream narrative.

Guided relaxation therapies, meditation, and yoga can all help address daytime stress and anxiety that could be triggering nightmares. Improving sleep as a whole could also be helpful.  “A doctor or sleep specialist may help you identify health conditions that may be affecting your sleep, such as sleep apnea,” says Light. “They can also help you strengthen your circadian rhythms with lifestyle and environmental changes.” That includes a calming bedtime routine.

Another option for those experiencing nightmares and night terrors is medication. “For adults with more severe cases of night terrors, a doctor may prescribe medications like benzodiazepines or antidepressants,” says Light.

When To Consult A Doctor

Any time sleep issues are affecting your waking hours, it’s best to consult a professional. That’s true if you feel like you aren’t getting enough sleep because nightmares are waking you up, or you’re reluctant to fall asleep in the first place.

If nightmares, sleepwalking, or night terrors are causing physical danger to you or those around you, see a doctor immediately, advises Light. You should also seek care if you’re experiencing anxiety, depression, or other psychological symptoms, regardless of whether you’re having nightmares or not.

Addressing daytime stressors can be a good way to minimize nightmares and night terrors. But if these nighttime events are affecting your waking hours, it’s worth speaking with a doctor.