Alcohol is the most popular sleep aid in the world. Though it may not be marketed as a sleep medication, at least 20% of Americans regularly use it as one. Even healthy people who don’t abuse alcohol may use it on occasion to fall asleep more quickly and easily.

But while alcohol can help usher in sleep, it can also disrupt it. Nighttime awakenings, lower sleep quality, and reduced sleep efficiency are common side effects of consuming alcohol, even in moderate doses. Most of us consider a drink or two to be safe, even healthy. But it doesn’t take much alcohol to change sleep patterns and have a detrimental impact on health. 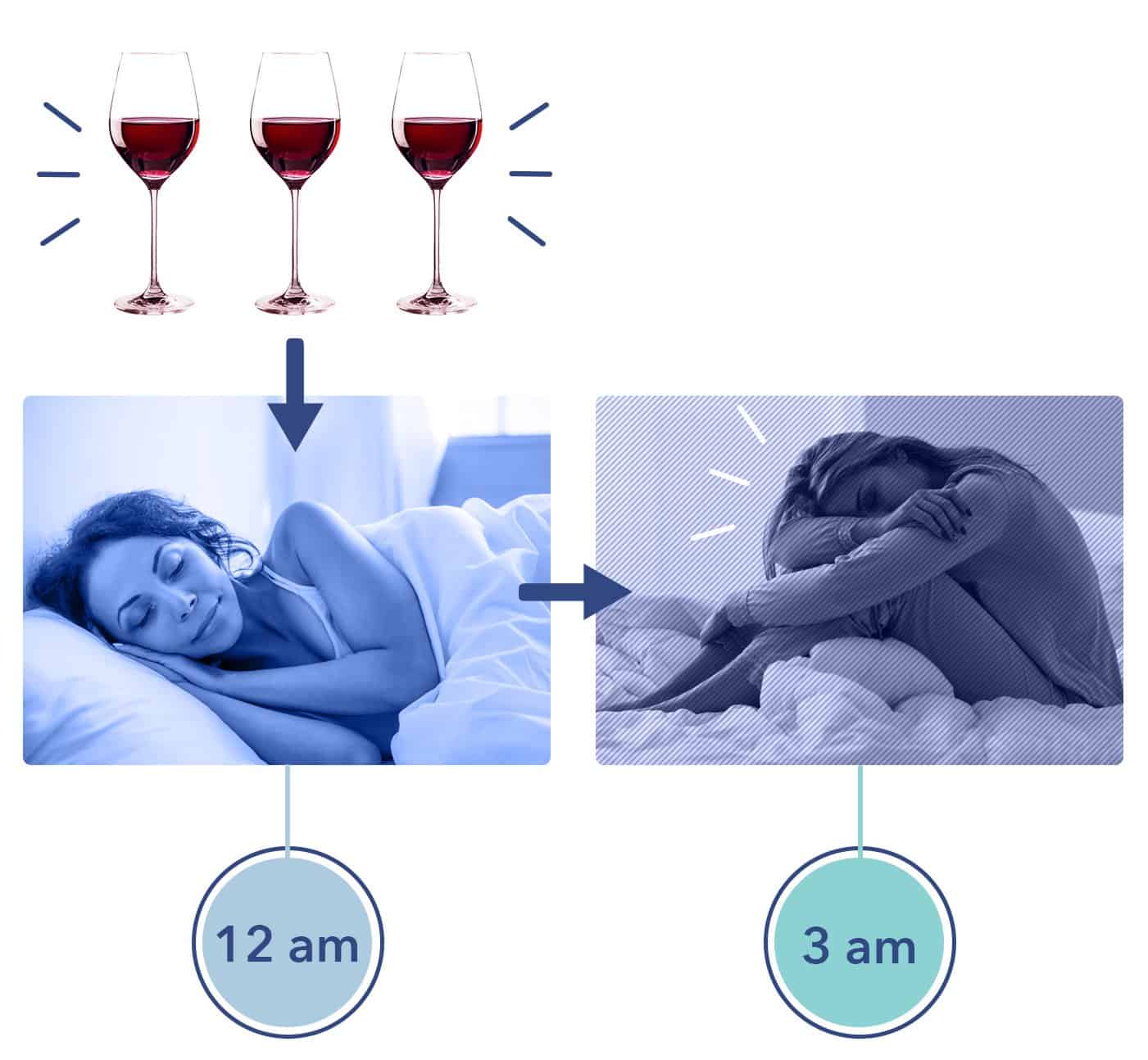 Alcohol and The Body

The type of alcohol used in beverages is called ethanol. (1) Ethanol is produced by the fermentation process of grains and fruits such as potatoes and grapes. Pure alcohol has no color, and converts to a sugar-based fuel inside the body. Alcohol depresses activity in the central nervous system, and is classed as a depressant drug.

Whether or not alcohol is dangerous to health may be dependent on dose. While moderate drinking may have physiological benefits as well as some potential drawbacks, chronic heavy consumption of alcohol can cause irreversible damage to the brain and body, including the circadian rhythm.

The only type of alcohol human beings can consume without harmful and potentially fatal effects to the body.

Consuming alcohol in moderate quantities — approximately one drink a day for women and two for men — could have a beneficial effect on certain biological processes. Moderate drinking may help enhance immune function, especially when the alcohol contains polyphenols such as those present in red wine. (2) Other studies show that moderate drinking has a neutral effect on immunity. (3) 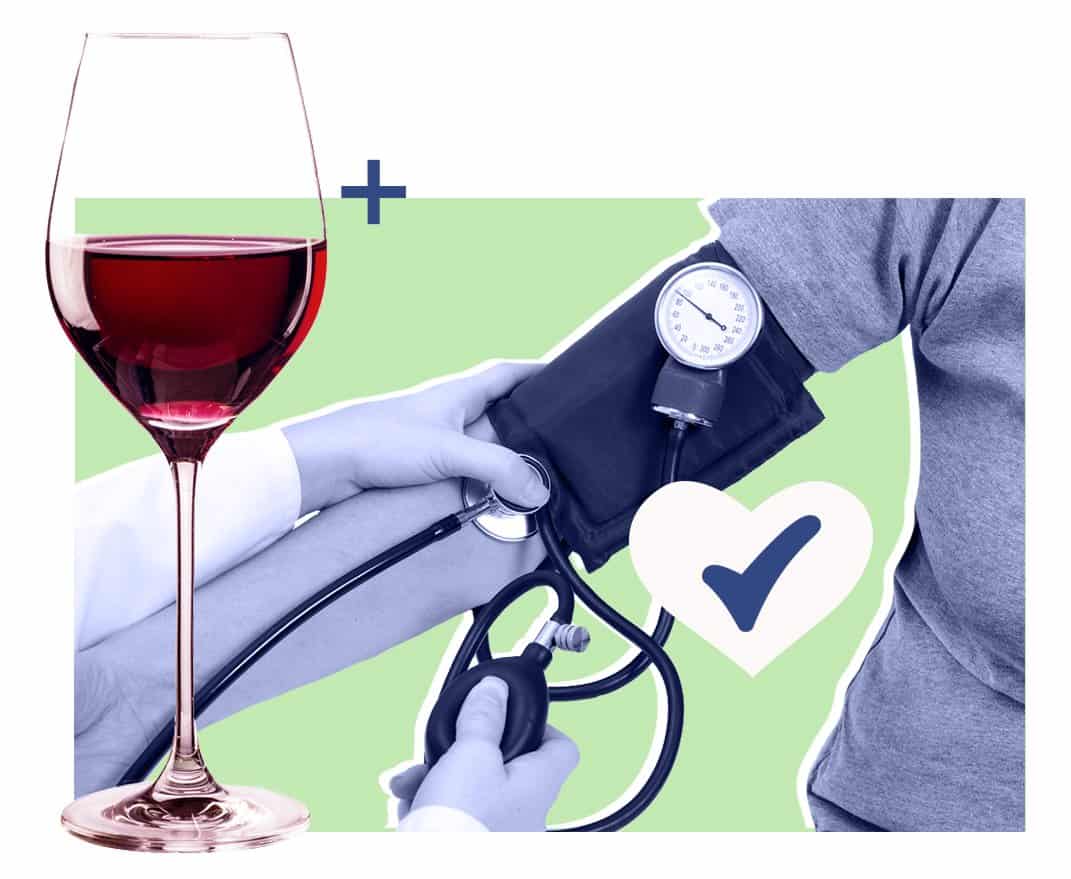 Moderate alcohol consumption appears to have a similar effect — beneficial or neutral — on the cardiovascular system, including blood pressure and heart rate. It may also reduce the risk of stroke and diabetes. (4)

Moderate drinking can raise the risk of some cancers, including esophageal and breast cancer. (5) Even light drinking may have an effect on cancer risk due to alcohol’s ability to alter the mitochondria of cells. Mitochondria generate the energy used by cells, and may cause cell death or dysfunction when damaged.

Q: What are mitochondria? A: Types of structures inside cells that convert oxygen and nutrients into energy.

There is no benefit to heavy drinking and binge drinking. (7) The International Agency for Research on Cancer states that alcohol and acetaldehyde, a byproduct of the breakdown of ethanol, can cause cancer when consumed in high amounts. Heavy drinking raises the risk of numerous health conditions, including: 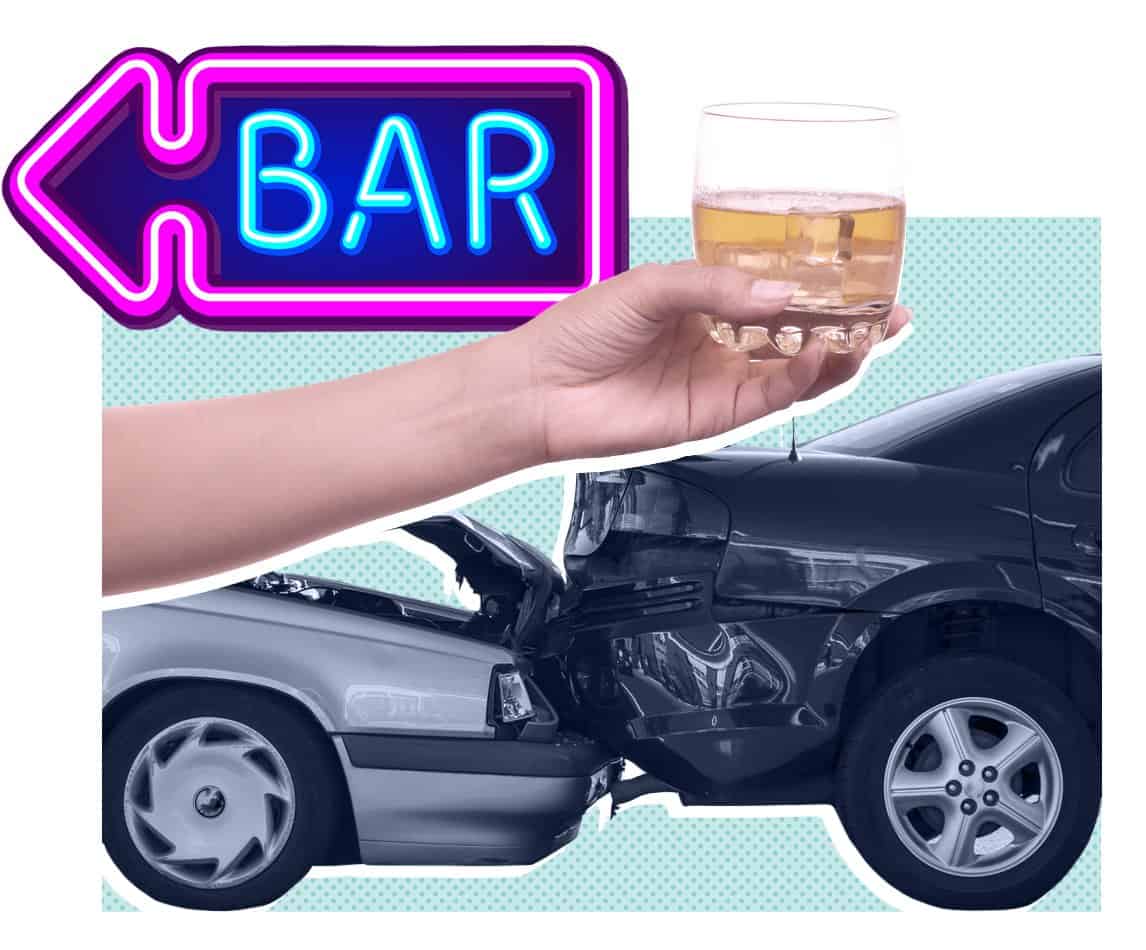 The impact of alcohol abuse, also known as Alcohol Use Disorder (AUD), is both physical and psychological. Alcohol is strongly implicated in suicidal thoughts and behavior. Studies show that heavy drinkers have a five-fold increased risk of suicide, particularly among men. (8) In one study of suicide attempts, alcoholics were more likely to complete suicide than those who were not dependent drinkers.

According to the National Institute on Alcohol Abuse and Alcoholism, AUD is a “chronic relapsing brain disease characterized by an impaired ability to stop or control alcohol use despite adverse social, occupational, or health consequences.”

Anyone who has experienced a restless night after a few drinks can attest to alcohol’s disruptive effect on sleep. Studies prove that alcohol can reduce sleep quality, change sleep patterns, and reduce time spent in one sleep cycle while increasing time spent in another. Though alcohol can increase drowsiness and reduce the time it takes to fall asleep, drinking generally does not have a healthy influence on sleep efficiency or sleep-related bodily functions.

Drinking can disrupt the circadian rhythm, which controls the sleep and wake cycles as well as digestion, body temperature, and myriad other essential processes. Studies of alcohol consumption and sleep show that the body can develop tolerance to alcohol when drinking occurs over consecutive nights. Though the body may be successful in adapting to consistent alcohol use over the short-term and in rebalancing sleep patterns, it is unable to adjust sufficiently when alcohol consumption is heavy and chronic. 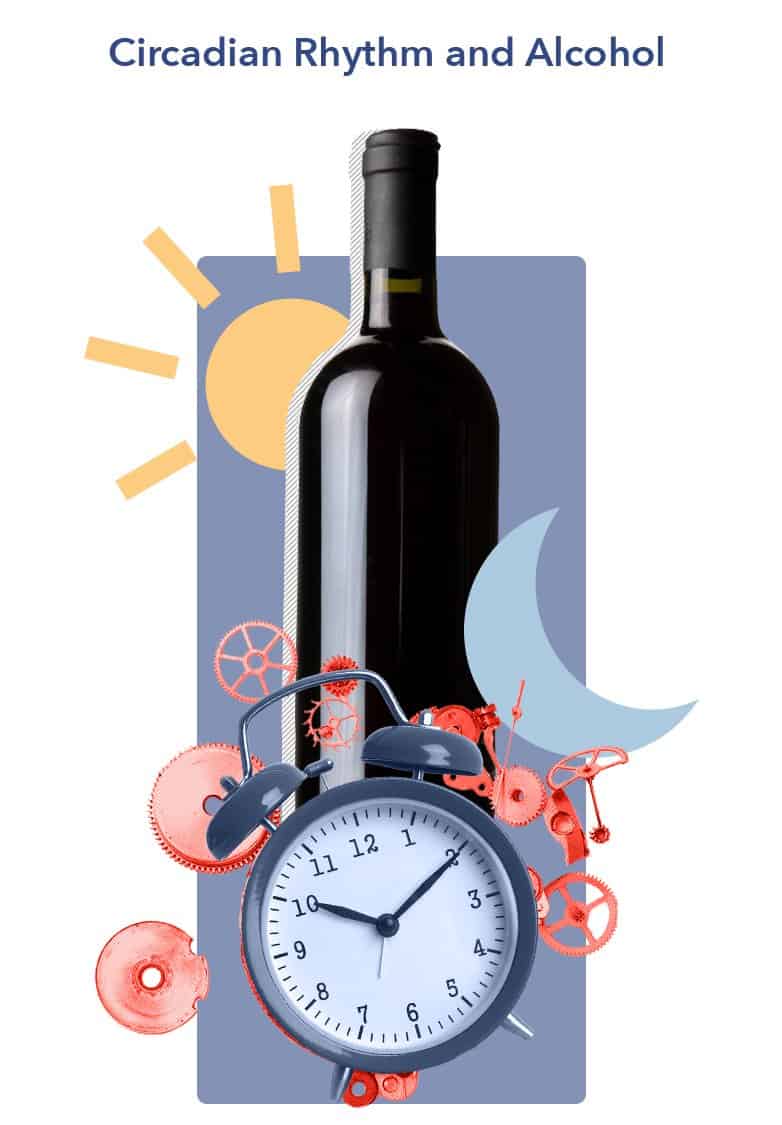 Alcohol impacts the way circadian genes express themselves by reducing levels of molecules that help to manufacture essential proteins. (9) Studies show that circadian rhythm genes may continue to display dysfunctional tendencies even after heavy drinking is stopped.

Once alcohol reaches the brain, it appears to mimic GABA, the predominant neurotransmitter of the circadian system. (10)  GABA also inhibits other neurotransmitters, preventing or delaying their primary functions. This inhibition can significantly slow down reactions and promote sleep during the early part of the night, but disrupt sleep cycles once the body metabolizes the alcohol and levels of GABA fall. (11) In addition to alcohol, GABA is impacted by drugs such as benzodiazepines and prescription sleep medications.

While the sleep-damaging effects of alcohol abuse are well-established, how does moderate drinking impact sleep? Research shows that the body metabolizes alcohol best during the “happy hour” of early evening. When consumed later at night, alcohol appears to shift sleep’s homeostasis — the balance between the need to sleep and wakefulness — to an earlier time of the evening. (12)

Moderate drinking can help reduce the time it takes to fall asleep, a period known as sleep latency. (13) In addition to its effect as a central nervous depressant, alcohol increases levels of adenosine, which blocks wakefulness-promoting cells in the basal forebrain. This process, as well as alcohol’s effect on GABA, may explain reduced sleep latency and the awakenings that can occur once levels of adenosine and GABA return to normal.

Q: What is sleep latency? A: Sleep latency, also known as sleep onset latency, is the amount of time it takes to go from wakefulness to the N1 stage of sleep once the lights have been switched off.

Moderate consumption of alcohol alters the orderly pattern and stages of healthy sleep, referred to as sleep architecture. Sleep is typically lighter and less efficient after drinking. Though more time may be spent in deep sleep during the first part of the night, time in REM sleep is reduced. The majority of dreaming occurs during REM sleep, as does the processing of emotions and memories. (14)

Decreased REM sleep can affect memory and potentially impact emotional responses during waking hours. (15) Noise, light, and other stimuli are more likely to cause awakening during REM sleep, which can increase daytime fatigue.

Once alcohol wears off, the body experiences a rebound effect. Sleep becomes lighter and less efficient, with more frequent awakenings. Though the disturbances to sleep have a significant impact on the body, not all awakenings will be noticed or remembered by the sleeper. Dehydration from alcohol may cause the heart to beat faster, making sleep more difficult.

Moderate drinking before bedtime can also increase the risk of the following:

A certain category of sleep disorder that involves abnormal movements, dreams, perceptions, or behaviors, most of which occur when falling asleep or transitioning between sleep stages.

Long-term alcohol abuse causes changes to the brain that can result in persistent sleep disturbances, even with abstinence. Though insomnia is not the only sleep-related effect of alcohol abuse, the disorder may be to blame for 10% of all costs associated with excessive use of alcohol. (17)

In addition to its effect on the circadian rhythm and neurotransmitters, alcohol appears to influence the release of essential hormones. These include melatonin, a sleep-promoting hormone that is necessary for healthy sleep and wake cycles. Alcohol can also suppress growth hormone, which is important for proper immune function. Even in lower doses, alcohol reduces levels of testosterone, raises levels of estrogen, and changes the way the liver metabolizes hormones of all types.

Alcohol is the most-consumed substance in the world, and is frequently used as a sleep aid. Alcohol may reduce sleep latency but disrupt sleep cycles and cause frequent awakenings during the night. (18)  Even moderate drinking can have a profound negative impact on sleep and the circadian rhythm.

Consuming alcohol early in the evening can help minimize but not eliminate the effect of alcohol on sleeping patterns. Sleep may be healthiest when not impacted by recreational  substances of any kind, including alcohol and caffeine. Trouble falling asleep is best addressed not by drinking, but by consultation with a sleep specialist who can help diagnose the issue and suggest healthy and effective treatments.