Night terrors, also called sleep terrors, are a type of sleep disorder that disrupts sleep and causes intense fear similar to that caused by nightmares. Unlike nightmares, night terror episodes may involve flailing, screaming, feelings of extreme panic, or sleepwalking.

Night terrors are considered a parasomnia, a classification of sleep disorders characterized by unusual behavior, vocalization, or movement during sleep. Night terrors are more common in children, but adults may suffer from them, as well. Though episodes normally last anywhere from a few seconds to a few minutes, they have been known to last thirty minutes or even longer. 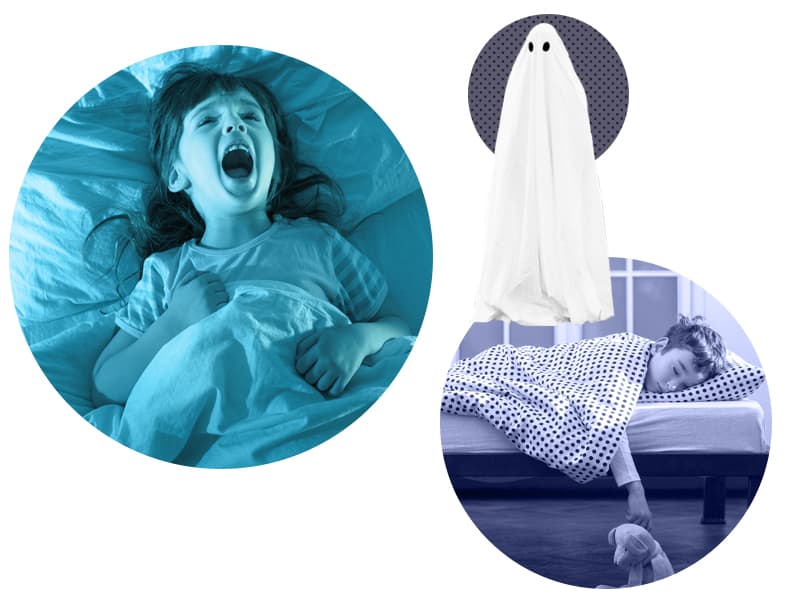 What Are Night Terrors?

Night terrors are a sleep disorder that typically occurs during the transition between the deepest stage of sleep, known as N3, and REM sleep, the fourth and final stage of sleep when vivid dreaming occurs. (1) The disorder results from a partial arousal from sleep, when the sufferer is not fully asleep but not conscious. Night terrors are characterized by a state of heightened fear, but do not typically involve dreams or nightmares.

Night terrors affect only a small percentage of children — approximately one to three percent — and an even smaller percentage of adults. (2) The disorder is more common in boys, and occurs most often around the age of one and a half.

While frightening for both children and parents, night terrors are not generally a cause for concern. Most children outgrow them by their teens or earlier. Night terrors may require treatment if they cause persistent sleep problems or become a safety risk.

Q: What distinguishes N3 sleep from other phases of sleep? A: N3 sleep, also known as slow wave sleep, is the deepest and most restorative stage of sleep. N3 sleep is important for immune function, tissue repair, and memory formation.

People who experience night terrors may scream, flail, sit up in bed, run around, or exhibit aggressive behavior. Some sufferers may leave the home, break windows, or damage furniture and other objects. (3) 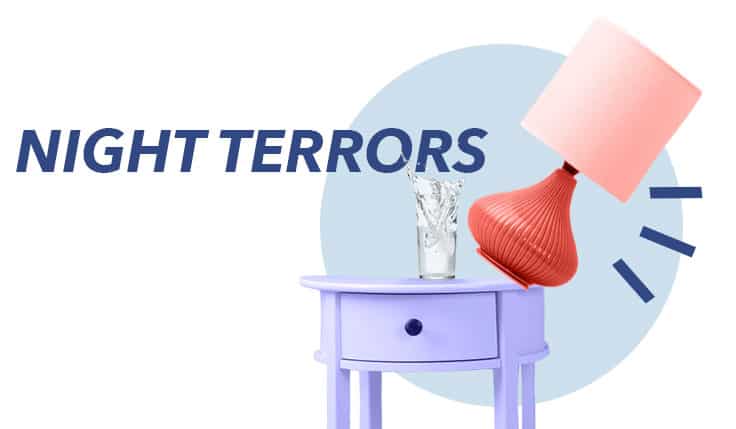 Other symptoms of night terrors include overwhelming fear and the inability to be awakened. Bedwetting occurs in some children. Sufferers may also experience some or all of the following:

One of the defining features of night terrors is amnesia, or the complete inability to recall the experience the following day. Even children who are awakened during an episode rarely remember it. (4) Though amnesia prevents direct recall of the occurrence, sufferers may experience the effects of night terrors after waking, including daytime sleepiness due to disrupted sleep.

The short or long-term loss of memories, including experiences and facts.

The disorder can also be associated with underlying medical conditions, such as seizure disorders and acid reflux. Other related triggers may include:

Night terrors may also occur as a side effect of certain medications. Other factors that can contribute to the disorder include stress, sleep deprivation, and fever. (6) 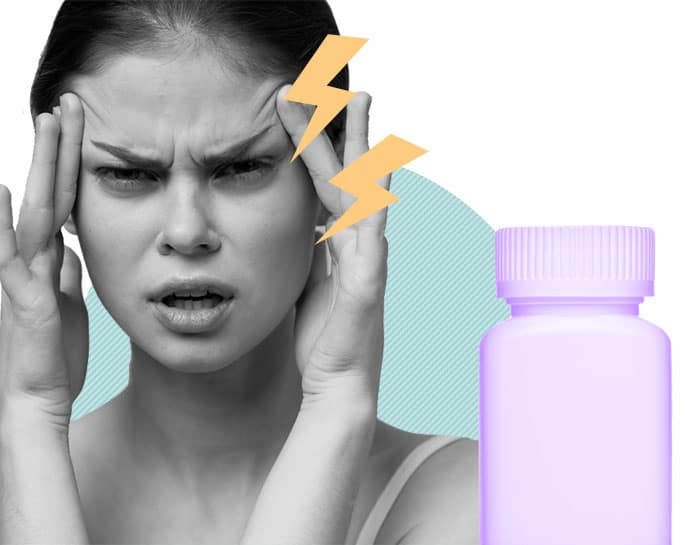 Night terrors tend to run in families, and in adults may be associated with a history of anxiety or depressive disorders. They may also be caused by alcohol or recreational drug use in adults.

Night terrors are normally diagnosed by a doctor based on the patient’s or parents’ description of events. Doctors may conduct a psychological or physical exam to identify conditions that could be contributing to night terrors. If the diagnosis is unclear, doctors might recommend a sleep study, known as a polysomnography. (7)

A polysomnography typically involves an overnight stay at a sleep lab. Brain waves, heart rate, and blood pressure are measured using sensors attached to the head and body. Limb movements and breathing are measured, as well. Though a sleep study may be helpful in cases where the diagnosis is less clear, the majority of night terrors sufferers can be diagnosed by symptoms alone.

Q: How long does the typical sleep study last? A: Approximtely ten hours, including preparation and sleep time.

Infrequent sleep terrors do not generally require treatment. Treatment may be needed if night terrors persist or cause significant sleep disruption. Treatment options include improving sleep habits, treating underlying conditions, and in rare cases, the use of medication. (8) Reducing stress and vigorous daily exercise may also be recommended.

Scheduled awakenings to avoid long periods spent asleep can also help. (9) These awakenings may be accomplished by parents, or by a machine designed to vibrate and slightly rouse the sleeper when it senses night terrors beginning.

Some studies show that co-sleeping with very young children may help reduce the incidence of night terrors. (10) Simply sharing a room with parents can reassure a child and make night terrors less likely.

The practice of a parent and child sleeping in the same bed.

Though night terrors and nightmares share features such as intense fear, elevated heart rate, and sleep disruption, they are distinct entities. Nightmares involve frightening dreams, whereas night terrors do not. People who suffer from nightmares typically know where they are when they wake, and are able to remember specific details of their dreams. People suffering from night terrors remain asleep, and don’t normally remember their experiences in the morning. 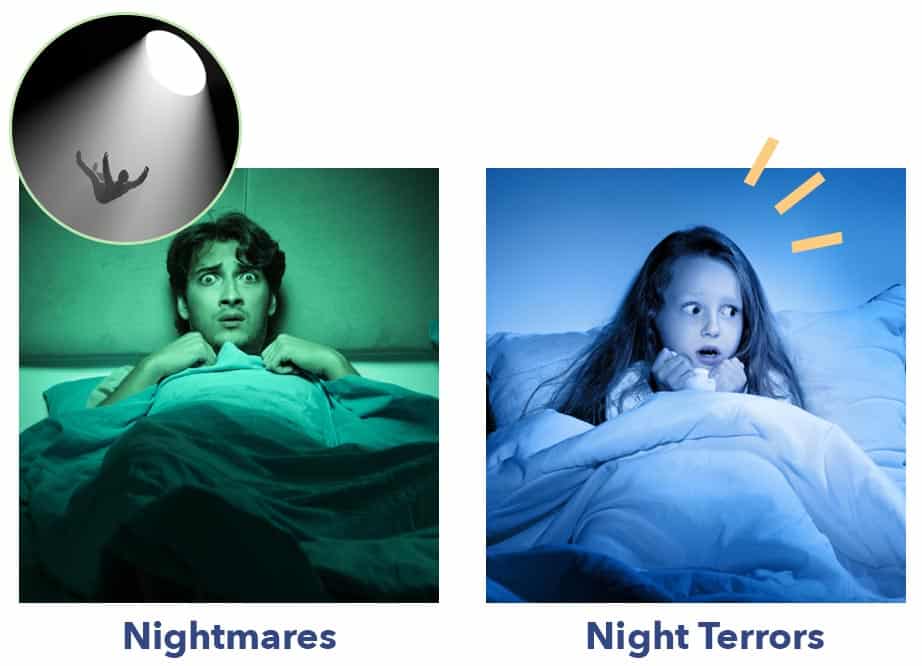 While it is relatively easy to wake a child or adult from a nightmare, it is very difficult to wake a person suffering from night terrors. Sleep specialists generally warn against trying to wake someone from a night terror, and advise keeping the sleeper as safe and comfortable as possible until the episode passes.

Night terrors are a fairly unusual occurrence in children, and quite rare in adults. They are considered a parasomnia, a sleep disorder associated with unusual behavior, dreams, or sensations. When night terrors do happen, they typically occur only on occasion and resolve by themselves by early adolescence.

Frightening as night terrors can be to outside observers, sufferers do not remember the incidents. A regular sleep schedule, naps, and a dark, quiet sleep environment can help prevent disturbed sleep and night terrors. If the disorder occurs frequently or puts a child at risk of injury, treatments such as medication or scheduled awakenings can help reduce or even eliminate occurrences.

Night terrors are a sleep disorder that is characterized by a state of heightened fear but do not typically involve dreams or nightmares. They can involve flailing, screaming, feelings of extreme panic, or sleepwalking. Night terrors also differ from nightmares in that they occur during the first half of the night when N3 sleep dominates the sleep cycle.

What are night terrors?

Night terrors are considered a parasomnia, a classification of sleep disorders that involve unusual behavior, vocalization, or movement during sleep. It is most commonly found in children, but adults can have them as well.

Night terrors can be a normal part of nervous system development in children. The disorder can also be associated with underlying medical conditions, such as seizure disorders and acid reflux, and can even be triggered by such things as migraines, sleep apnea, and more.

What are the symptoms of night terrors?

Night terrors affect everyone differently, however, many people who suffer from them may scream, flail, sit up in bed, run around, or exhibit aggressive behavior. Some may damage property and may even experience overwhelming fear and the inability to be awakened.