In our pursuit of healthy sleep, many of us try to follow the mandates of sleep hygiene. Keep the bedroom cool and quiet, switch off electronics, and avoid eating and drinking before bed. But what if we’re hungry, or need to have a late dinner? Which foods are safe to eat close to bedtime, and which ones should we avoid? Can certain foods and drinks actually help us sleep?

Studies show that some foods and drinks contain compounds that support healthy sleep, while others promote wakefulness. Those that support sleep are often natural sources of the sleep-promoting hormone melatonin, which is released at night from the pineal gland in the brain. (1) Other sleep-friendly foods have sedative properties that induce a relaxation response or reduce anxiety.

Sleep patterns are intricately connected to the timing of meals, the nutrients we consume, and how much we eat. (2) The circadian rhythm controls the body’s biological clocks, which regulate sleeping and waking, thirst and hunger, energy consumption, and metabolism. Like sleep, the digestive system follows a circadian rhythm. A sudden change in diet or eating habits can cause a shift in how we sleep, and vice versa. Just as diet affects sleep, sleep affects metabolism, fat storage, food cravings, and the way energy is used. (3) 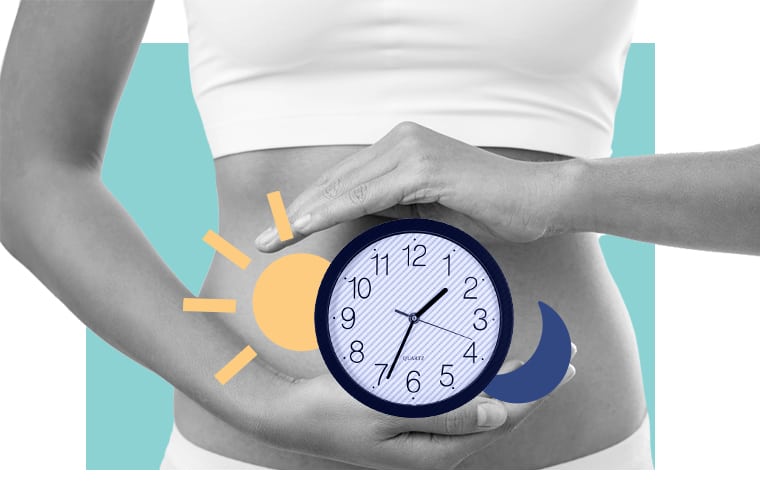 Sleep deprivation causes the metabolism to become sluggish and insulin sensitivity to drop. (4) This lack of sensitivity increases fat storage and cravings for “high-energy” foods that raise the blood sugar quickly, such as desserts and bread.

Ghrelin, the hormone responsible for making us hungry, increases when we don’t sleep enough, while leptin, the hormone that makes us feel full, decreases. Sleep deprivation not only raises ghrelin levels, it impairs the brain’s ability to make decisions, increasing the risk of poor food choices. Due to its effect on hormones and digestive organs, chronic sleep loss can lead to obesity, diabetes, stroke, and cardiovascular disease.

Q: Why does lack of sleep increase appetite? A: The circadian rhythm of hunger hormones changes when we're sleep-deprived, increasing the desire to eat. The reward center of the brain changes, as well, making high-sugar and carbohydrate foods more appealing.

High carbohydrate foods appear to make it easier to fall asleep faster, but may make sleep as a whole less efficient and restful. (6) Eating foods that raise blood sugar may also lead to waking during the night as blood sugar drops, causing an increase in appetite and a surge in neurotransmitters related to alertness and hunger. 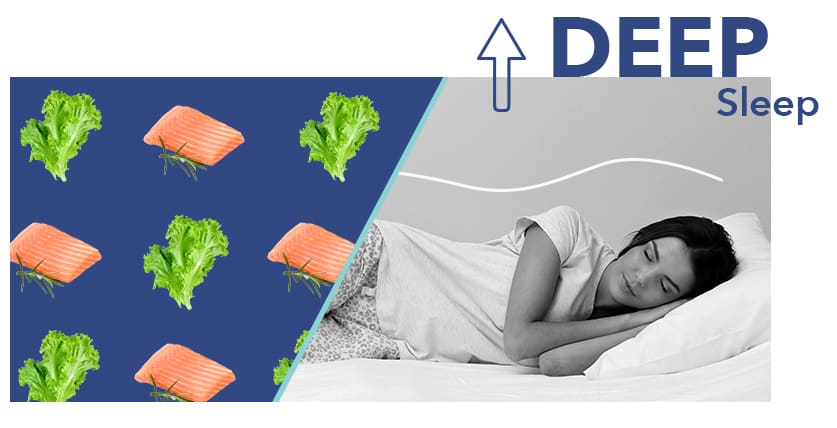 Studies on the impact of high fat and high protein diets on sleep are mixed, and more research is needed to determine if the effects are positive or negative. Most studies to date have been conducted on healthy volunteers with normal sleep patterns. Additional studies on people with sleep disorders may help illuminate the effect on sleep of specific diets and nutrients.

Foods That Help You Sleep

Foods containing certain natural substances appear to promote deeper and healthier sleep. These substances include tryptophan, magnesium, calcium, and melatonin, all of which are associated with healthy sleep cycles. (7)

Tryptophan is an amino acid used by the body to create the B vitamin niacin. Niacin in turn is used to make serotonin, which acts as a precursor to the sleep-promoting hormone melatonin. (8) Foods that naturally contain tryptophan include: 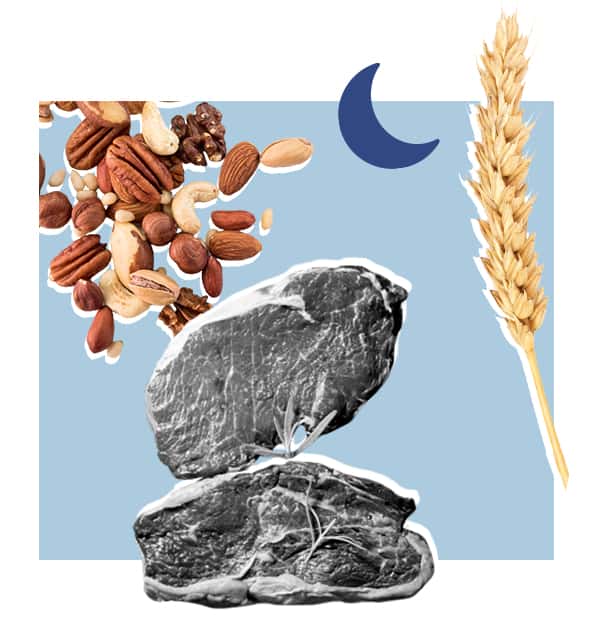 Magnesium is a mineral involved in nerve and muscle function. Magnesium helps to regulate melatonin as well as important neurotransmitters in the nervous system, promoting relaxation and healthy muscle function.

Magnesium binds to receptors for a neurotransmitter called gamma-aminobutyric acid (GABA), which is essential to sleep. GABA is targeted by certain prescription sleep medications such as Ambien. Magnesium also helps the body regulate adrenaline, and may be useful for both sleep and anxiety.

Natural food sources of magnesium include:

Wheat germ, avocados, tofu, and the popular whole grain quinoa are also good sources of magnesium, as are supplements. Magnesium supplements may cause gastrointestinal upset, while foods containing magnesium typically do not.

A neurotransmitter that prevents transmission of impulses between certain types of nerve cells in the brain.

While foods containing tryptophan and magnesium help promote healthy melatonin release, there are some foods that actually contain naturally occurring melatonin. Consumed before bed, these foods can augment melatonin release and make falling and staying asleep easier. These foods include:

Like tryptophan and magnesium, calcium aids in the production of melatonin. (9) Good sources of calcium include:

Drinks That Help You Sleep

Moderate amounts of certain beverages can encourage sleep and induce a relaxation response. Some drinks have mild sedating effects, while others help promote the release of melatonin and related compounds.

Tart cherry fruit, also known as the Montmorency sour cherry, is a bright red and slightly bitter variety of cherry. The tart cherry contains more phytonutrients and vitamin A than the sweet cherry, but is less palatable eaten fresh. 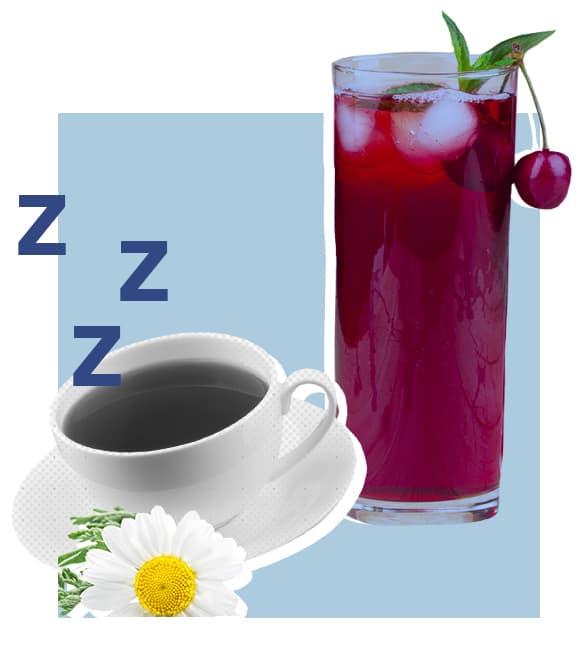 As a sleep supplement, tart cherry is available as a juice or in supplement form as capsules or extract. Studies show that tart cherry extract has a moderate sleep-promoting effect, approximately equal to valerian root tea or capsules. (10)

Though the effect is not as significant as that of prescription sleep medications, tart cherry may be helpful for those with mild difficulty falling or staying asleep. Taken at bedtime, tart cherry appears to increase levels of exogenous melatonin, or melatonin from a source outside the brain. One recent study showed that both sleep time and efficiency were improved in volunteers who drank tart cherry juice and then underwent a sleep study, or polysomnography.

In addition to melatonin, tart cherries contain tryptophan as well as high levels of polyphenols and vitamin C, which may help promote sleep by reducing unhealthy inflammation. (11)

Valerian tea is brewed from the stems and leaves of the valerian plant. Valerian root is a powerful natural sedative that may help promote sleep and relaxation and ease menstrual cramps. (12)

Q: What is valerian? A: Valerian is a flowering perennial native to Europe and Asia. Its roots in particular have been used for medicinal purposes for thousands of years.

Chamomile is known for its anxiety-reducing effects, especially when brewed in combination with lavender. Studies show that chamomile has mild sedating properties, and has traditionally been used to treat nightmares, insomnia, and digestive upset. (13)

Milk is a natural source of tryptophan, which is involved in the production of both serotonin and melatonin. Milk contains calcium, which helps to promote sleep, as well.

Recent studies show that cannabidiol, or CBD, can reduce anxiety, which may help make falling asleep easier. Low doses of CBD may actually have the opposite effect, causing wakefulness in certain people. Higher doses of CBD may be more effective at promoting sleep.

Foods and Beverages That Can Disrupt Sleep

Some foods and drinks can promote healthy sleep, while others can make sleep more difficult. Though not everyone has the same response to caffeine or stimulating foods, certain substances tend to promote wakefulness, particularly when consumed at night. Food and drinks that can cause sleep difficulties include: 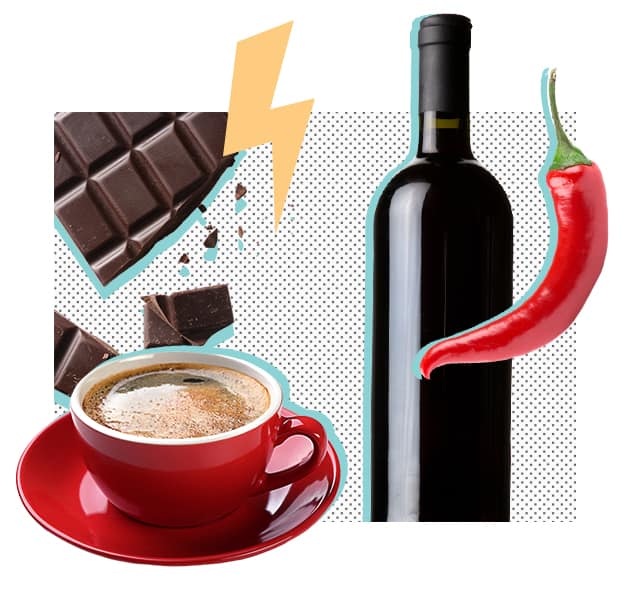 What To Eat Before Bed

If hunger strikes before bed, many sleep specialists recommend a light, nutritious snack rather than a full meal. Lighter fare can prevent delayed or interrupted sleep due to hunger and help preserve the circadian rhythm. Foods to choose before bed include the following:

Drinks that can induce sleep include small amounts of chamomile and valerian root tea. Unsweetened tart cherry juice or tart cherry supplements have been shown in numerous studies to promote healthy production of melatonin and deeper sleep.

Eating heavy meals before bed can interrupt the circadian rhythm, activate the digestive system, and cause heartburn and other gastrointestinal symptoms. Light snacks of sleep-promoting foods may make it easier to fall and stay asleep without causing the sleep disruption common with heavier meals. Avoiding stimulants such as caffeine, chocolate, and spices in the hours before bed can make falling asleep easier, while eating healthy foods such as almonds and cottage cheese can alleviate hunger and encourage healthy sleep patterns.