To some of us, the first few minutes we spend falling asleep don’t really feel like sleep. Our minds may feel active and we may have brief, non-sensical thoughts that aren’t quite like dreams.

We’re not asleep yet, are we? Technically, yes.

N1 may not always feel like sleep, but it is an essential phase between wakefulness and deeper sleep.  N1 is the first and lightest stage of sleep, when “drifting off to sleep” occurs, dreams may spontaneously begin, and muscles may move in a jerky motion called hypnic jerks or sleep starts (1). Healthy sleepers spend approximately 2-5% of their sleeping time in N1 sleep.

N1: The Gateway Stage of Sleep 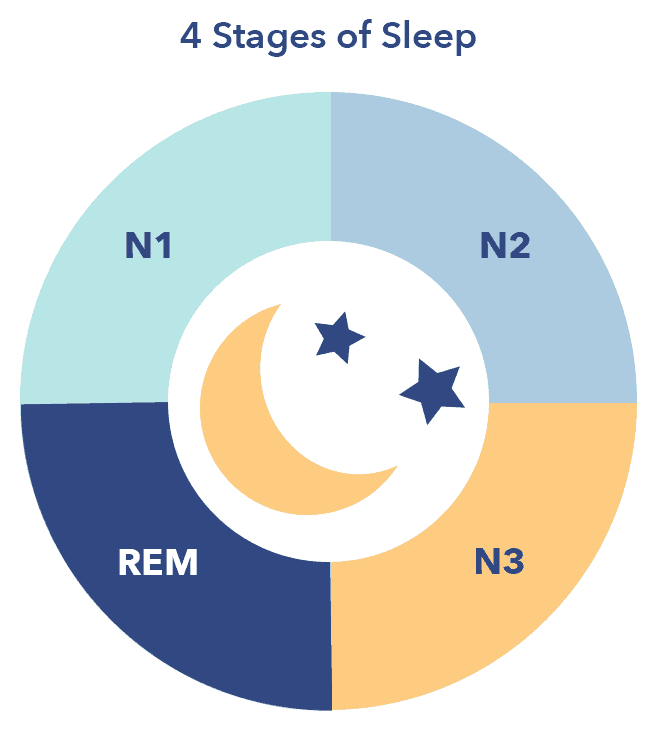 N1, sometimes termed “active sleep,” is the transition stage between wakefulness and being fully asleep. N1 may also occur between other stages of sleep, such as the slow-wave sleep of N3 and REM sleep.

Slow wave sleep takes place during the N3 stage, and is considered the deepest and most restorative phase of sleep. The words slow wave refer to the distinct, synchronized pattern of brain waves recorded during this stage on EEG.

Though the transition from wakefulness to N1 sleep may feel like a relatively simple process, (3) it is quite complex, and involves the smooth functioning of the circadian rhythm as well the involvement of several brain structures. 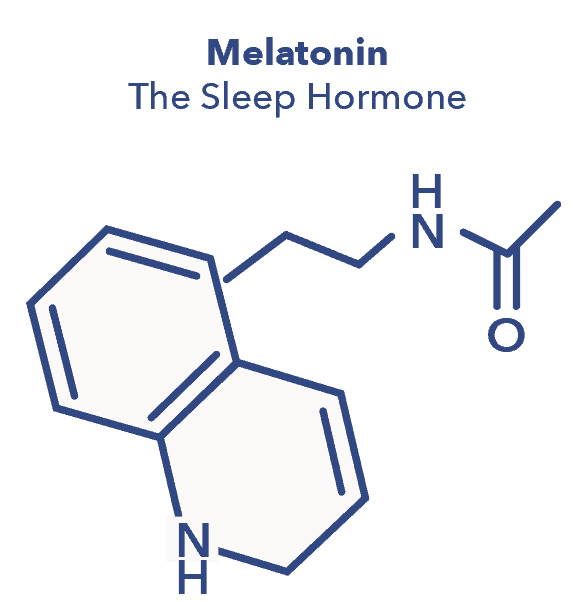 The dreams of N1 may feel more like brief flashes of images or thoughts, and may disappear from memory as soon as we fall into deeper sleep.

Q: How does sleep deprivation impact sleep? A: Lack of sleep may reorganize the four stages once a person finally sleeps, resulting in more time spent in the deep, slow-wave stage of N3.

What Happens During N1 Sleep?

The first period of N1 sleep is typically brief, lasting between one and seven minutes. As the lightest stage of sleep, N1 may easily be interrupted by noise or other activity. As the sleep stages progress, louder and more disruptive stimuli are required to cause awakening.

Though wakefulness may still intrude in the early minutes of N1 sleep, brain wave activity has already begun to change. (5) According to EEG measurements, N1 sleep has begun when 50% of the alpha waves typical of the pre-sleep relaxation state switch to mixed frequency alpha and theta waves. (6) (7)

Other physiological changes associated with N1 sleep include decreases in the following bodily functions:

N1 sleep is also characterized by slow rolling eye movements. (8) The feeling of falling is common during N1 sleep, and may be related to a time when human ancestors slept in trees.

The operating temperature of the human body, particularly as measured in deeper organs as opposed to surface tissues such as skin and muscles.

Naps have long been a controversial subject in the world of sleep. Recent research, however, shows that naps can be healthy, quickly dissipating the drive to sleep without interrupting nighttime sleep. (9)

The body’s internal alerting signal tends to lag in the mid-afternoon, allowing the sleep drive to dominate for a brief period of time. This often coincides with the period following lunch, which further encourages the body to rest. 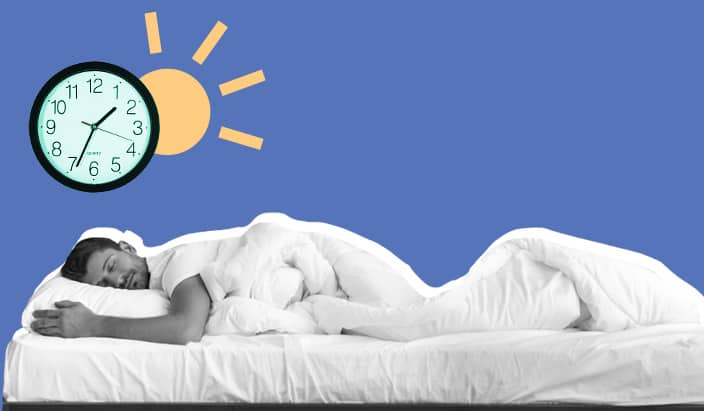 Other benefits of naps include:

Longer naps can cause what is termed “sleep inertia,” the feeling of grogginess that occurs when waking from the slow-wave sleep of N3. Naps appear to be most beneficial when they last approximately 20 to 30 minutes. This is the amount of time needed to complete the first two sleep stages, N1 and N2.

While N1 is a lighter stage, N2 is slightly deeper, and involves additional physiological changes such as loss of environmental awareness and the appearance on EEG of certain types of brain waves called sleep spindles and K complexes. (11)

Q: What are brain waves? A: rain waves are electrical activity created by coordinated firing of neurons in the brain. In N1 sleep, alpha waves transition to theta waves.

Microsleeps are typically caused by sleep deprivation, but may also be caused by:

Microsleeps may be avoided with sufficient sleep, treatment of underlying conditions that may contribute to drowsiness,  or a change in medication.

N1 sleep may be delayed or disrupted by a number of sleep disorders, including insomnia, hypersomnia, and movement disorders such as restless legs syndrome.

Though N1 sleep typically begins within minutes of going to bed, insomnia may delay the start of this stage indefinitely. The period of time between wakefulness and when sleep begins is known as sleep onset latency. (12) Both chronic and acute insomnia may delay sleep onset and the start of N1 sleep by minutes or even hours. N1 may also be mistaken for wakefulness, when light sleep has already begun. 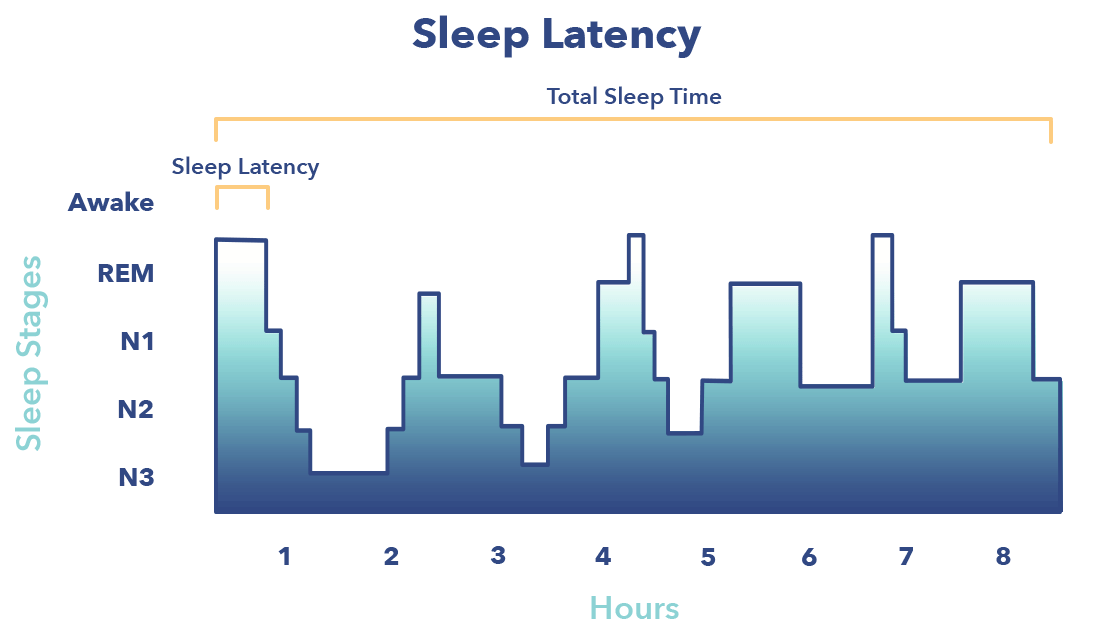 Restless legs syndrome, a movement disorder that causes a strong desire to move the legs in response to uncomfortable sensations, may also disrupt sleep. Because the disorder tends to occur at night just when sufferers want to fall asleep, the movement can make sleep difficult or impossible. Constant movement and painful or uncomfortable sensations may lead to excessive N1 sleep as well as insufficient N3 or REM sleep.

Other sleep-related movement disorders that may increase time spent in N1 included bruxism, or teeth-grinding, and periodic limb movement disorder, also known as PLMD. PLMD is similar to restless legs syndrome, but tends to occur during sleep rather than at sleep onset. The movements of both PLMD and bruxism can cause arousal in the sleep centers of the brain, decreasing deep sleep and leading to daytime sleepiness. (13)

A relatively brief sleep onset latency of less than twenty minutes is considered ideal by most experts. Shorter sleep onset latency tends to correspond to improved sleep efficiency, or sleep that is healthy and restorative. However, transitioning into N1 sleep too quickly can also indicate sleep dysfunction. A very brief sleep latency of a few minutes or less may indicate sleep deprivation or a sleep disorder such as hypersomnia or narcolepsy. (14)

Narcolepsy sufferers often fall directly into REM sleep without passing through N1 or the other stages of non-REM sleep. Restorative sleep and normal sleep patterns may be interrupted, leading to feelings of fatigue despite excessive time spent asleep.

Sleep apnea is a sleep disorder characterized by snoring, episodes of arrested or extremely shallow breathing, and daytime fatigue. Breathing may stop hundreds of time in a single sleep session.

Q: Does sleep remain the same throughout life? A: No. Babies go directly from the wake state into REM sleep. Slow wave sleep decreases with age, even if the duration of sleep stays the same.

Central sleep apnea in particular may put sufferers at increased risk of sudden death during sleep due to loss of neurons in the part of the brain that controls breathing. Both types of sleep apnea are serious sleep disorders that raise the risk of diabetes, obesity, stroke, and heart disease.

Because sleep apnea prevents proper breathing during sleep, oxygen levels may decrease in the brain, signaling the brain to wake from deeper sleep. This can result in increased time spent in the lighter stages of sleep such as N1 and N2. The rearrangement of sleep architecture due to apnea can cause chronic daytime fatigue despite adequate hours spent in bed, and may lead to chronic deprivation of restorative sleep.

N1 is the first of the four essential sleep stages. Of all the stages, N1 may feel the most like being awake, though the body undergoes marked physiological changes that distinguish N1 from wakefulness. Delay of or excessive time spent in N1 sleep may be an indication of a sleep disorder or other sleep disturbance

Though N1 may comprise only 2-5% of total sleep time, important physiological changes occur that usher in deeper, more restorative sleep. Like the other stages of sleep, N1 is an essential part of sleep health and overall wellness.