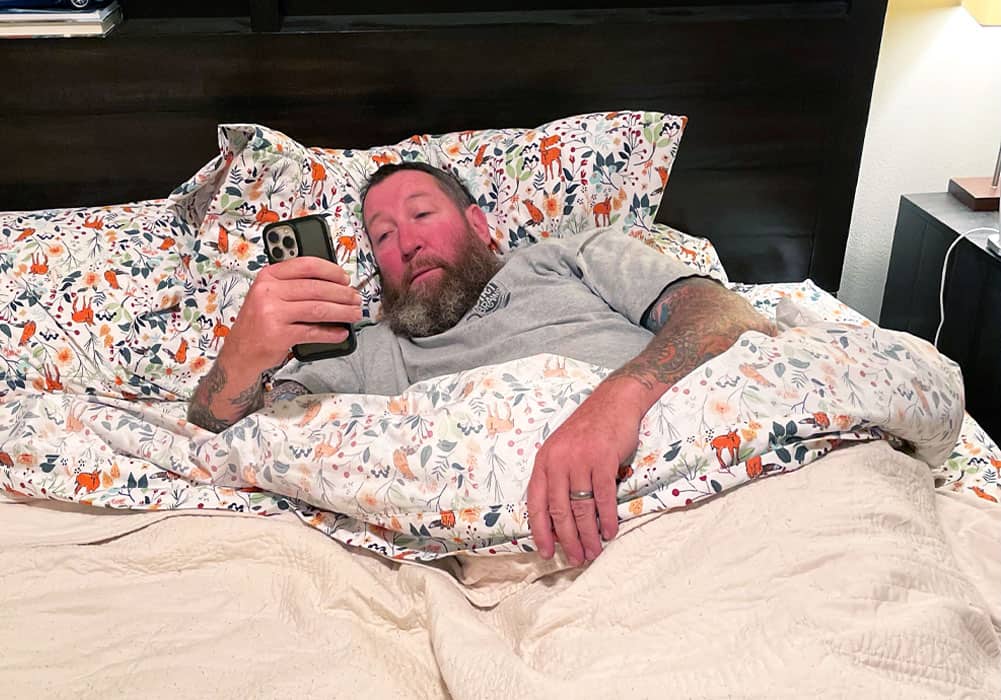 Based in Port Orchard, WA, Ryan Juran has worked in construction for the last 30 years. With an hour-long (or more) commute into Seattle, his days stretch as long as 15 hours, starting well before dawn. Though he has to get up early, he’s got a superpower many of us dream of.

Here’s his sleep diary as told to Tricia Romano.

I am a concrete superintendent for an infrastructure job, the widening of interstate 405 (which serves the Seattle region), for 17 miles.

I get up around 3:30 in the morning and I leave the house between  4 and 4:30. In the morning, I set an alarm for what time I need to leave. Maybe I’ll set up one as a backup, but I’ve been getting up early for 35 years probably. Maybe closer to 40-something years. I started delivering newspapers as a kid, and then worked on farms as a kid, and then I’ve been in construction. I was in the military in the Marine Corps. You get to the point where you learn to wake up. You don’t really do a lot of oversleeping—maybe in my younger days I did, but as you get older, you just know what time you need to get up and your body wakes up itself. There’s no way to sleep in, you know? You just wake up at that time.

I have learned to go back to sleep a little bit, but it depends on what’s going on. It depends on my schedule too. Because anytime we’re pouring concrete on a job, I gotta be there. Like this Friday, I’ll go to work. I have a concrete pour in the morning at 6 am and then I have another one at 9 am. So, by noon or 1 pm, I’ll be done. Go home, get some sleep in the middle of the day, and then get back up at like 10:30, 11 and go back to work, and work from midnight until maybe nine or 10 in the morning.

I only drink coffee on the weekends. I used to eat breakfast; now, I don’t eat a breakfast sometimes. I don’t eat until I get so busy. I maybe eat midday. You know, so I get up at 330 and I may not eat until 11,12 or 1 one and then like six.

A Long Commute and Long Day

I travel about 70 miles throughout the day. I drive all day long, up and down Interstate 405, checking on various crews and everything else, making sure they get all the materials and everything and that they’re gonna meet the schedule for our concrete pours.

I’ve got a commute. It’s about an hour in the morning and an hour and half in the evening. It used to be about two hours at night, so I want to get on the road and get home and as soon as I get home, I have a routine. I empty my lunch box, plug in my iPad, my work phone, everything else. And then get undressed, get my clothes for the next day, and stack them up. Take a shower, eat dinner, and then I’m in bed shortly after that, within an hour to two hours.

Sometimes we burn the candle at both ends, you have events or go out and meet friends, and stay up a little later, and you may not get as much sleep. In my 20s and 30s I probably got four or five hours of sleep. I live on seven hours six to seven hours asleep now–that’s not too bad. There’s no catching up on sleep. People think, “Aw, I’ll catch up on sleep.” Your body is only gonna let you sleep so much.

My wife, Carey, she used to commute in the city, we would get up same time and then we would leave on the four o’clock ferry. And then I’d be at work by 5am and then she would get into work at 5:30 or 6 or 7, depending on the schedule; we usually commuted together to and from the city. Now, I drive around and drive across the Narrows Bridge and around through Tacoma and then down to Southcenter and 405 toward Bellevue. I like being able to connect with my wife, but by the time I get on a ferry, and get off the ferry, I could have just driven around.

I’m very busy at work, I set an alarm. When I was in charge of a whole crew, I would have set alarms to tell me to take breaks because I’ll work guys through breaks and lunches. I’m trying to get a job done so I just go, go go, and those internal alarms don’t go off and the day will just slip away. We usually have a break the first two to two and a half hours in the day, and they have lunch within five hours from the start of the day. And then another break within two hours after that. Everything has dictated because we’re union; you have to be within a certain interval.

I’ve got a routine. I do the same thing every day and every night when I come home. So, I get up at 3:30 am, I take a shower. I get dressed. I pack my lunch, go out start my truck, do whatever I need to do around the house, unload the dishwasher, whatever. And I go to work and then as soon as I get home, I have paperwork I got to do—well, it’s not paperwork anymore—I do it on an iPad.

When I get home, after I eat dinner around 6 or 7, I’ll watch a little TV with Carey and maybe talk a little bit about the next day and what we got going for the weekend and just how our day was. Sometimes, both of us are just zoned out. We usually talk throughout the day. When she gets up and gets moving—she gets ups later—she calls me. We talk all day. I’m gone 15 16, 17 hours most days.

Before bed, my work phone stays out in the living room but it’s always on; my personal phone I turn on to vibrate, so it won’t wake me up or wake Carey up. There’s nothing that’s life threatening. Right now, we have crews that work 24/7, so we have a night crew, but we have a person that’s a superintendent on nights. So, if something were to arise at nighttime, the nighttime superintendent would take care of that.

I have a California king with a memory foam topper on top. It’s fairly hard. I lost my side of the bed because my lovely wife took over my side of the bed because it was softer for her back, so now we’ve switched positions after almost 10 years. It was easier on her back. It must be softer because I’ve got her by 100 pounds. It must have broken down more and she didn’t like it stiffer. And I don’t mind her side because it’s not as broke down as bad, but I still miss my side of the bed. I think it’s a Serta, and then we bought a topper from Costco for $279.

I’m in bed by 8:30, 9:30 at the latest. Sometimes, I’ll stay up later. You stay up a little later and then 3:30 comes pretty fast. That’s four and a half hours. I remember my dreams when I first wake up. Sometimes it has to do with work. I dream about what’s going on in the world, or what’s going on in my own head and try figure out the day’s events. I don’t know enough. My wife being a psychology major, she would know more about dreams.

Last night, I fell asleep on the couch. Carey was next to me on the couch. And I woke up at 9 and we were both were asleep for the last two hours.  She got up and turned all the lights off; she climbed to bed. Murphy, our Pit Bull, climbs into bed and I went to sleep. And then as soon as 3:35 came around, I was up out of bed taking a shower. Rest is history.

Tricia Romano is an award-winning journalist who has written for The Daily Beast, The New York Times, The Village Voice, Spin, and Radar magazine. She is the former editor-in-chief of The Stranger and was a staff writer at the Seattle Times. She won Best Feature at the Newswomen’s Club of New York Front Page Award for her Village Voice cover story about sober DJs and promoters in the nightlife industry, “The Sober Bunch.” She is currently working on her first book about the Village Voice.