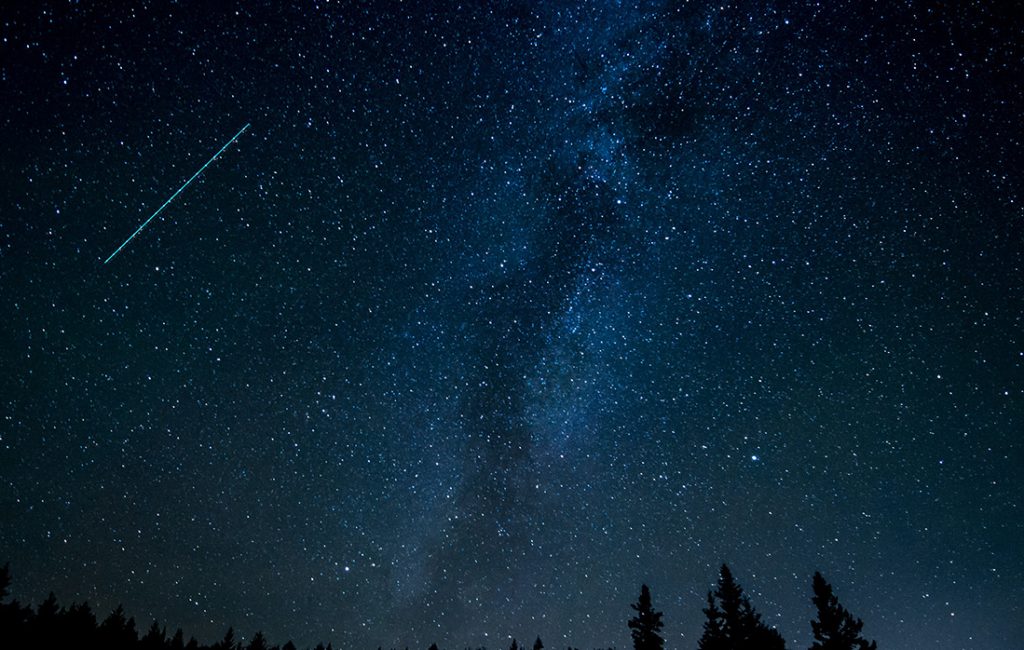 Stargazers everywhere are setting their sights on the Perseid meteor showers this week, or what NASA considers “the best meteor shower of the year.” Typically making their appearance every year around mid-July to late August; this year, the Perseid showers will peak from August 11 to August 12.

The peak of the annual Perseid meteor shower (this one caused by Earth passing through the bits of ice and rock left behind by Comet Swift-Tuttle, which last passed close to Earth in 1992), though, shares the sky with August’s full moon this year. The confluence may make it difficult to see the impressive meteor shower display in the sky but this week’s sky happenings may still impact you.

With so much cosmic activity going on (including ongoing solar storms), it begs the question: Do these night beauties affect our ability to catch our forty winks?

The answer is sort of.

First, we can say with a good degree of certainty that moon cycles affect sleep, and we know this because there is scientific research. One study shows that while people took longer to fall asleep in the days preceding a full moon, they also experienced short sleep and didn’t sleep as deeply. Another study showed that a full moon might decrease total sleep time by 25 minutes and increase the time it takes to fall asleep by as much as 30 minutes.

And, of course, there are plenty of theories as to why the moon cycle affects our sleep, the most prevalent of which is that a full moon reflects more light.

“The Moon is at its brightest during its waxing gibbous phase, just a few days before it’s full,” says Mark Zhang, CEO & founder of Manta Sleep. “Our off-the-grid ancestors used that extra light to get more done with a diminished threat from nocturnal predators. As much as we don’t like being compared to our relatives, those ancient ancestors are responsible for a lot of our behavior today.”

Zhang goes on to say, “This helps explain the results of an international study led by University of Washington’s Professor Horacio de la Iglesia. In the days leading up to a full moon, the research team found that our bodies start pumping out drowsiness hormones later in the evening, and we get less sleep per night.”

So, while the star of the week may be the Perseids, if you hit the sack and find a hitch in your giddy up, come Thursday or Friday, it may not be a result of the showers, but the moon.

What About Astrological Influences?

Science, aside, lots of people have theories about the stars and sleep. We couldn’t help but consult the astrologists.

Senior Editor and astrologer at YourTango, Aria Gmitter, has some theories, “Any time the cosmos is active, we will notice effects on our sleep cycle. Our sleep cycles are how we tap into the subconscious mind. Some people are ‘energy sensitive,’ so when they feel like something important is about to happen, they are unable to sleep.”

These showers are highly anticipated because of the show they put on as they streak through the night sky. Traveling at 37 miles per second, the Perseid meteors are fast and bright. Their wow factor is further bolstered by the fact that they are plentiful, averaging about 50 to 100 meteors per hour. Pair that with the fact that they have long tails of light that streak the sky as they fall through the atmosphere, and we certainly have a nice show. And if all of that doesn’t sound fanciful enough, the Perseids are also revered for their fireballs or large explosions of light and color that remain visible longer than the average meteor streak.

Gmitter also adds that while meteor showers don’t have great astrological significance, they may still have implications for our sleep.

“In general, most astrologers consider meteor showers as minor events,” says Gmitter. [We] won’t use them in interpreting a chart or a horoscope, but we do pay attention to the seasons of life, including what happens in the universe. A meteor shower can be a time of awakening and awareness and alerting us that it’s time to look at our lives to make important decisions or changes.” So while the cosmic debris itself may not be what’s keeping us up at night, musings on personal issues or the excitement of future plans could be the culprit.

“The Perseid Meteor is our yearly reminder to tackle conflicts and strife in all areas of our lives, be it relationships, families, or careers,” says Clare.

How to See the Perseids

According to Space.com, the Virtual Telescope Project plans to host a Perseids webcast, offering viewers a chance to see some meteors before the moon reaches peak brightness. The webcast will begin at 9 p.m. EDT (0100 GMT Aug. 10) and showcase any meteors captured by the telescopes’ wide-field cameras.