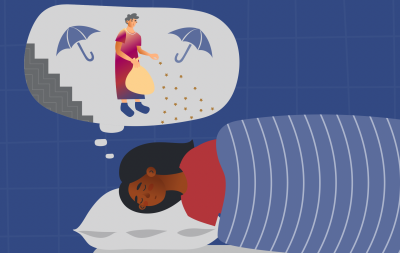 The lore of the Sandman

You probably know the Sandman from pop culture as musicians, authors, and screenwriters alike have put their own twists on the fairy tale character. From superhero movies to comic books and popular songs by Metallica and The Chordettes, the Sandman is an age-old character who has yet to take his final bow.

The Sandman has been making appearances in sleep-related stories across Europe for centuries. In fact, getting people to sleep was his MO well before the lights, cameras, and retellings came about. The Sandman is most well known for bringing sleep and dreams to children, but in some versions of the tale his methods and motivations are much more sinister than you might expect.

The origins of the Sandman

The Sandman’s origins are rooted in European folklore, but the exact inception of this tale is harder to pinpoint. The first appearance of the Sandman seems to come from 18th-century Germany when the expression “der Sandmann kommt,” meaning “the Sandman is coming” became a popular way to describe someone who looks very sleepy. This saying stems from the idea that someone who is tired looks like they had sand poured in them.

This idiom became a sinister story in the early 1800s. In his first written appearance in the German short story, Der Sandmann by E.T.A. Hoffman, the Sandman would throw sand in children’s eyes when they wouldn’t go to sleep, causing their eyes to fall out. Even worse, he would feed the eyes to his own children. Eek—not quite the sweet bedtime story we were looking for!

Later on, our character gets a much better wrap. Hans Christian Andersen’s 1841 folk tale Ole Lukoje (a typical Danish first name, Lukoje translates to “close eye”) is a much nicer—and more popular—adaptation. Andersen’s Ole Lukoje is said to quietly tiptoe upstairs in socks and a silk coat that changes colors, lulling children to sleep by sprinkling magical dust in their eyes and telling stories. He has two umbrellas he holds over children; one with pictures to bring beautiful dreams, and one without for misbehaving children, leading to a dreamless sleep. This character is much kinder—and more beloved—than the former, with a soft spot for children and a love of storytelling.

Why does the Sandman put sand in your eyes?

In both the Danish and German portrayals, the Sandman throws sand in children’s eyes. In the Danish folktale, his magic dust keeps their eyes closed so kids can stay sleeping and dreaming. When they wake up with those “crusties,” in their eyes, it was a sign that the Sandman had visited during the night and brought good dreams. In the German version, the sand is seen more as a punishment for not going to sleep.

Is the Sandman good or evil?

Depending on the portrayal, the Sandman can be good or evil—or somewhere in between. Hoffman’s Sandman is undoubtedly wicked, while Andersen’s is decidedly good. Of course, other good, evil, and even more gray versions have appeared as the character has continued to make appearances throughout pop culture.

The Sandman in pop culture

From a sweet-looking animated guardian to a creature born from nightmares, the Sandman has appeared in several modern movies, books and comics. In the Spiderman 3 movie with Tobey Maguire, the Sandman villain is someone audiences almost come to adore.

In this 2007 Marvel movie, Flint Marko is transformed into a shapeshifting being made of sand after falling into a particle accelerator. While Marko is a career criminal who wreaks havoc on the city and even killed Spiderman’s Uncle Ben, his criminal habits turn out to be his way of taking care of his daughter with cancer. Instead of controlling other people’s dreams, this Sandman seems caught chasing his own—healing his sick daughter.

In Neil Gaiman’s comic, The Sandman, our character is neither good nor bad. The Sandman is also known as Dream, the King of Dreams, and Morpheus. This slender, pale, dark-haired depiction of a powerful being that wears all black is very different from the other versions of a magical creature. While he does good for the most part, he’s not always seen as “good.”

Likewise, Netflix’s live-action version of Gaiman’s comic sticks close to the source material, updating the story to modern times. This brings the Sandman into the 21st century, providing the fairy tale character a fresh wave of popularity and intrigue among his new fans.

The Sandman is here to stay

The Sandman is an incredibly versatile fairy tale character. Repeated adaptations centering on this master of dreams have kept the folklore alive and ever changing, turning the Sandman into a new and refreshing character each time.

Whether he’s sprinkling magic dust to lull children to sleep or appearing as Morpheus in Gaiman’s comics, his characterization is as vast as our dreams. The Sandman provides an interesting look at how stories can morph and change through generations and cultures. We only wonder what the next rendition of the dream maker may be!

Megan McNeil is an insufferable morning person unable to sleep past 8 a.m. An avid hiker and adventurer, she and her husband live life on the move with their cat, Fitzgerald, who is also a morning person. She is a two-time Emmy nominated former reporter. If she’s not writing, you can find Megan enjoying a local craft brew, reading a good mystery, and exploring the outdoors.