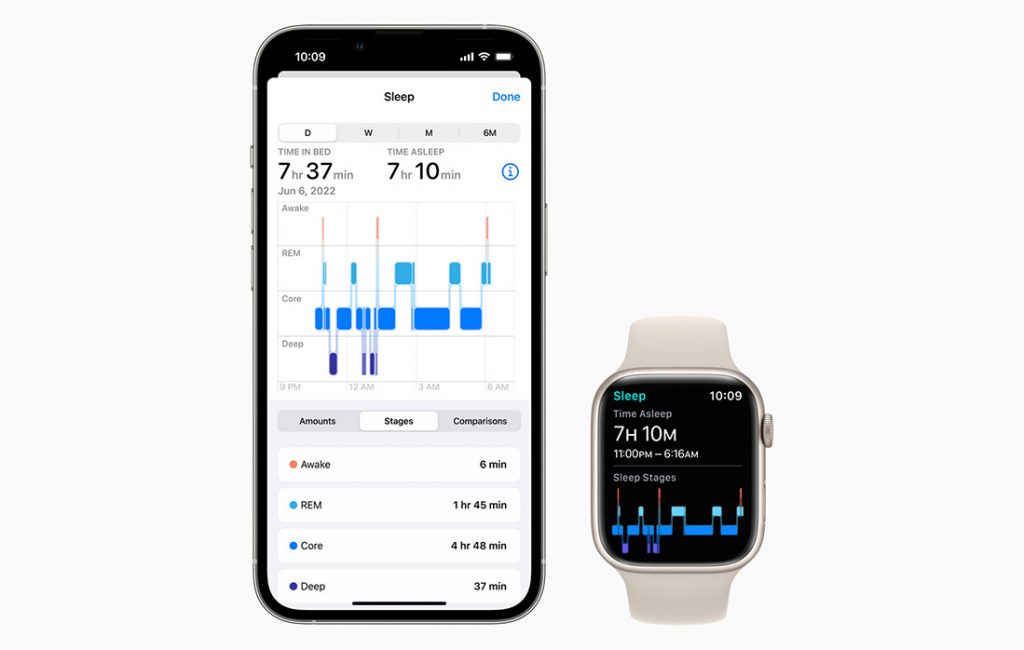 At this year’s Apple Worldwide Developers Conference, CEO Tim Cook and other bigwigs unveiled all sorts of new tech goodies, from redesigned laptops to the next generation of operating systems for its computers, tablets, and smartphones. Buried in this deluge of data was news about an update to the Apple Watch’s operating system that will track the wearer’s sleep in a more granular way. According to a press release from Apple, “Using signals from the accelerometer and heart rate sensor, Apple Watch can detect when users are in REM, Core, or Deep sleep.”

Currently, your Apple Watch can kind of guess how much you’ve slept if you turn on “Sleep Focus,” based on how much you move around while you sleep. There are a bunch of externally developed apps you can download to try and get data on your sleep cycles, and they all have their own ways to collect and quantify data with varying degrees of success and accuracy.

Dr. Dan Gartenberg, a sleep scientist and the CEO of SleepSpace, which offers both a sleep-tracking app and a “Smart Bed Platform,” explains, “Devices like Apple Watch, Oura, and Fitbit use something called Photoplethysmography (PPG) to measure your heart rate. From motion and heart rate data combined we can develop algorithms that get close to what an electrode sensor would detect when it comes to our brainwaves. Deep sleep and REM are defined by certain types of brainwaves and physiological states and these devices can estimate these states with about 80% accuracy. So these new tools give us a window into our sleep health, since healthy sleep means more REM and deep sleep.” He adds, “Our new app actually allows users to swipe between different sleep detection algorithms (I.e our own, Apple, or another device).”

Dr. Azizi Seixas, director of the Media and Innovation Lab at University of Miami, says he uses several types of tracking devices himself. “I think they are useful for general wellness and in some cases to identify risk for serious sleep disorders and sleep-related poor health, like heart disease [or] heart rate variability,” he says. However, he adds, “No two wearables estimate the same behavior (like sleep and step count) the same, and so users might be disappointed that fancy derived composite scores are only the company’s ‘black box’ and generally unvalidated algorithm.”

Will This Apple Watch Update Be Different?

Dr. Valerie Cacho, a sleep medicine specialist, tells us that while it’s unclear how Apple defines “core sleep” versus REM or deep sleep, it’s thought to be “the minimum amount of sleep needed and not a specific sleep stage.”

Apple’s press release promises, “The machine learning models were trained and validated against the clinical gold standard, polysomnography, with one of the largest and most diverse populations ever studied for a wearable.” However, sleep studies done in a clinic typically use a variety of data-gathering technologies, such as electroencephalography (EEG) to measure brain waves; it seems difficult, if not downright unlikely, to get the same range and accuracy of data from a consumer device that attaches at one point on the body like the Apple Watch.

While it’s tempting to gather as much data as possible on our personal habits, obsessing over what your wearable device says about your sleep may be as bad for you as a late-night Netflix binge.

“Your subjective experience of how you feel in the morning can be a great measure of how good your sleep quality is,” says Dr. Cacho. “Yes, it is possible for technology to aid in this measurement; however, it shouldn’t overrule one’s subjective experience. I’ve spoken with patients who wake up great; however their tracker has told them that they have 20-30 percent of ‘restless sleep’ at night, which was discouraging to them. If you are someone who is looking to increase your sleep time by changing certain lifestyle habits, i.e. less caffeine, alcohol, more exercise, using a tracker to measure if your total sleep time increases may be beneficial.  If you have anxiety around sleep and toss and turn at night, I wouldn’t recommend to use a tracker as it may make your sleep worse and lead to a condition known as ‘ortho insomnia’ or insomnia from over tracking.”

Great, another thing to keep us up at night!

Jenni Miller is an NYC-based writer and editor who has managed to make a career out of being morbidly curious about people, the media we consume, and why. Along the way, she has traversed the tundra of Sundance, worked countless red carpets, and interviewed everyone from The Lizardman to Jackson Galaxy.