After peaking in the 1980s, the waterbed might be poised for a comeback as its original inventor launches a new generation into the world of e-commerce.

Charles Hall, the man credited with inventing the waterbed in the late ‘60s, is gearing up to make a splash in the digital space with his latest venture, AFLOAT. Set to launch in January 2019, AFLOAT will introduce the world to Hall’s line of “reimagined” waterbeds, which he touts as new and improved. The beds aren’t available for sale on the company’s website yet, but the website does feature a video of Hall explaining why his newest invention is the best yet:

I invented the waterbed 50 years ago, but this one is by far the best. We’ve had the opportunity to use new materials that weren’t available back then, the top surface is more comfortable, the wave suppression and support system below is more comfortable. It’s the perfect bed.

Similar to Hall’s original design, the AFLOAT waterbed uses a hose through which water fills the mattress. However, the new bed employs a foam base, proprietary stretch-fabric technology, and a dual zone temperature regulating feature that allows sleepers to warm or cool their individual sides of the bed. I reached out to Charles Hall to learn more about what makes this new model different from his first waterbed, but he declined to comment.

Interestingly, after Hall partnered with CEO of City Furniture Keith Koenig earlier this year, the online retailer began selling AFLOAT waterbeds prior to Hall’s own preorder sales (which are scheduled to launch next month). City Furniture is the only retailer selling Afloat beds right now, and they start at around $2,000. As with many mattress brands in the e-commerce space, Afloat will offer a 100 day, no-risk sleep trial.

According to the AFLOAT site, Hall introduced the original waterbed as a final class project while studying design at San Francisco State University. Dubbed early on as the “Pleasure Pit”  by his classmates, the waterbed’s underlying sexual tenor seemed a perfect fit for the burgeoning Free Love era of the ’60s. But now — nearly six decades later — can a waterbed stay afloat amidst the bed-in-a-box boom?

Well, at the time of its invention, the novelty of the waterbed seemed to compensate for its tedious (and sometimes dangerous) assembly. Though it was advertised as a sexy-chic way to sleep, some of you might remember that installing a waterbed meant running a hose through your bedroom, using a pump to siphon the water out when it needed to be replaced, and the ever-present possibility of your mattress springing a leak. Not to mention, the early waterbed models typically came with wooden frames that weighed hundreds of pounds. 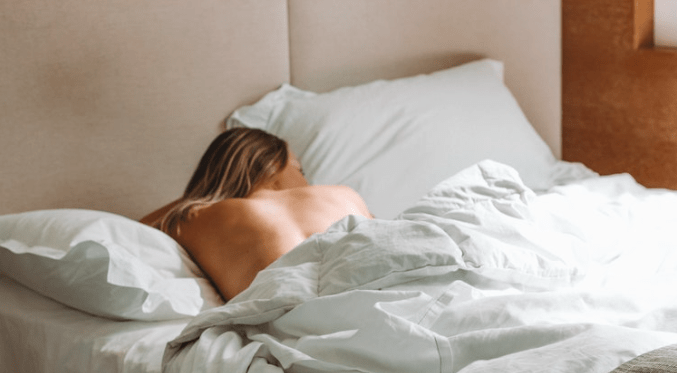 Though the waterbed flourished through the 80s, the introduction of memory foam, latex, and other user-friendly bedding innovations pushed it into the shadows. And just like that, the waterbed’s newness waned and the model fell out of fashion.

Nowadays, mattress shopping largely revolves around the bed-in-a-box business, and the ease of direct-to-consumer shipping. Though the waterbed as we remember it would almost certainly buckle under the pressure of its modern day competitors, Hall’s new design — complete with lightweight foam bases and trial periods — might just make waves all its own.

While the AFLOAT waterbeds won’t launch on the company’s website until next month, social media is already buzzing about the return of the Pleasure Pit. In the meantime, we at Sleepopolis will be closely following this industry comeback.