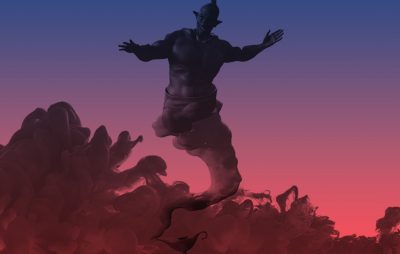 If mythology is any indication, people have struggled to sleep for centuries. Myths about creatures lurking through the night can be found in cultures around the world, often serving as an explanation for puzzling experiences we can’t otherwise rationalize. In pre-Islamic Arabia, for example, a specific type of shape-shifting spirit known as jinn (also known as al-jinn or djinn) was considered the cause of sleep paralysis—something some people believe to this day. Read on to learn more about these mythical sleep disturbers.

Jinn describes a group of spirits that inhabit the earth but can’t be seen by humans in their natural form. The word jinn actually translates to something veiled from sight or hidden. According to folklore, jinn are made of smokeless flame, but they can take human or animal form. They exist in the same realm as humans, but outside of our physical world. Actually, you may know jinn by a different name—genie. Like Aladdin’s genie, these creatures can take different forms and have incredible power.

Westerners associate Aladdin’s genie with three wishes. The Disney version was inspired by a folktale in The Thousand and One Nights, a collection of tales from the Middle East and India, called “The Fisherman and the Jinni.” In this tale, a fisherman finds an old bottle in the sea. When he opens it, he discovers a jinni that has been trapped for centuries. This story has a happy ending, as the jinni ultimately bestows the fisherman with good fortune—after it gets over its initial fury over being locked up for so long, of course.

While details about the appearance and abilities of jinn vary, stories about these creatures can be found in the Koran, the sacred scripture of Islam. Like humans, the jinn can choose between good and evil, procreate, and will eventually die. It is said that they live in deserted places, caves, graveyards, and, disconcertingly, darkness.

What is the story behind the Jinn?

In pre-Islamic Arabia, jinn were said to inspire poets—they’re not described as good or bad. Still, it’s believed that they’re responsible for all sorts of things that befall humans, including diseases, accidents, and, yes, sleep woes. A special type of jinn known as Jinn Al Kaboo is described as the culprit behind sleep paralysis, which can be a pretty terrifying experience.

While there is no standard definition, sleep paralysis is typically described as a state characterized by the inability to move when someone is just waking or about to fall asleep. It may be associated with other sleep disorders, a family predisposition, or psychiatric conditions. Speculations about the nature of sleep paralysis may be based in either medicine or culture.

People who experience sleep paralysis describe the downright frightening sensation of being alert but unable to move. Downright terrifying hallucinations can be another symptom. Some people experience a feeling of suffocation, as though something is pressing down on their chest, making it hard to breathe. Others perceive the presence of someone (or something!) dangerous in the room, while still others experience an out-of-body sensation. For centuries, people have attributed these symptoms to something evil. Interestingly, culture plays a significant role in an individual’s interpretation. And in Islamic folklore, it’s Jinn Al Kaboos that are said to possess humans with a nightmare and the entity causing the heavy weight on the chest. Spooky, right?

Are jinn good or evil?

Technically, jinn aren’t inherently good or bad. But depending on what you read, they are considered capable of possessing people, as in the case of Jinn Al Kaboo. One study also found that people in some Muslim populations believe jinn are the cause of psychiatric symptoms.

Modern portrayals of the Jinn

The genie in Disney’s Aladdin is the most famous modern portrayal of a jinni, though it does lack the characteristically spooky nature of jinn folklore. Even more recent is the Arabic original series on Netflix called Jinn, in which a field trip to Petra brings two jinn into the human realm. Contrary to the traditional portrayal of jinn, the Netflix series premise is based on one evil and one good jinn.

These days, we have scientific explanations for many of the world’s mysteries. Still, the idea of the jinn persists in many cultures, thanks to folklore in North Africa, Persia, Turkey, Syria, India, and Indonesia. Depending on where you live, one type of jinn in particular—the Jinn Al Kaboo—may be blamed for the phenomenon known as sleep paralysis. Whatever you believe, it’s a fascinating (and spooky) explanation!