The Ultimate Guide to Baby Sleep Regression in 2023 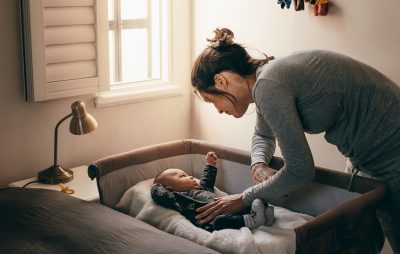 You finally feel as though you’ve made it over a major parenting hurdle! Your baby is sleeping soundly through the night and now you are too. It’s an exciting moment until… your infant slips into a sleep regression phase and returns to waking in the middle of the night. While it can feel like a major setback, it’s perfectly normal.

What Is Baby Sleep Regression?

Baby sleep regression refers to a disruption in a newborn’s sleep patterns. It occurs at various stages of growth and development and can differ from child to child. A baby that was sleeping soundly but suddenly begins to wake and grow fussy during the night is likely experiencing a sleep regression.

Newborns have not mastered their internal biological clock, also known as the circadian rhythm. Our internal clocks alert us that we should be asleep at night when it’s dark outside and awake during the day when it’s light out. But newborns haven’t yet developed this rhythm. In fact, a newborn spends more than two-thirds of the day sleeping.

A baby develops the properties of a circadian rhythm between about two to three months of age. Cortisol rhythm begins at about 8 weeks, melatonin at about 9 weeks, and body temperature rhythm at about 11 weeks. During this time, a newborn is developing the components necessary to regulate their sleep-wake cycle. But as with most things, there is a learning curve involved.

Think of it as a baby taking their first few steps. They’re trying to learn how to walk, but they may stumble along the way. They’re still trying to sort out their balance and gain control of it. The same holds true for their ability to sleep through the night. They’re trying to get the hang of it, but there may be a few missteps to sort through first.

Nicole Johnson, lead sleep consultant and founder of The Baby Sleep Site, says every situation is unique. “There’s not a one-size-fits all, this is going to work for every family or even every baby within the same family,” said Johnson.

When Does Sleep Regression Occur?

At about four months, a baby’s sleep is reduced from 16-17 hours to about 14-15 hours a day. Their sleep is spread out throughout the day and usually does not last more than four hours at a time. Since your child is sleeping less at this stage in their life, you may find that they are waking more frequently, fussing more often, and sleeping for shorter periods of time.

Johnson says this is a pivotal time in your child’s development because they begin to adopt more adult-like sleeping habits.  “Once they hit around 4 months old, though it sometimes starts as early as 3 months old, they have to go through a lot more sleep cycles just like adults do,” said Johnson. Since this is an important stage in your child’s growth, it’s important to be proactive in teaching your baby healthy sleeping habits.

Sleep issues may develop at six months of age for several reasons. As your child ages and matures, they may suffer from separation anxiety, for instance, not understanding that the separations are only temporary. As they grow more active, they may experience overstimulation or overtiredness as well, causing them to become restless and have problems falling or staying asleep.

Expect your baby to be on the move this age! Because of your baby’s increasing physical activity and continued growth, they may experience a sleep regression around the eight month mark. “They’re often learning how to become more mobile, standing, cruising, sitting up, that kind of thing,” said Johnson.

“Sometimes they’re also teething. So that can cause what we call sleep regressions, where they start waking more frequently at night, they’re generally a little bit unsettled. Most sleep regressions at this age are temporary, lasting around three to six weeks,” Johnson added.

Your baby has hit a huge milestone — the one year mark! It should be an exciting time, but if your 1 year old isn’t sleeping well, you’re probably feeling less than thrilled. Your child may be transitioning from crawling to walking, and this new stage of activity can spur a new sleep regression along with it.

This sleep regression could be triggered by a couple of things. For one, your baby is growing more active, which could cause overtiredness. They may also get hungry at night because of the extra calories they’re expending during the daytime, which may lead to similar results.

Between 1 to 2 years of age, your child should be getting between eleven and fourteen hours of sleep. But at this point, he or she may be increasingly reluctant to go to bed and more apt to awaken during the night or to experience nightmares. Your child may also exhibit heightened separation anxiety.

According to Stanford Children’s Health, separation anxiety peaks between 1 to 18 months of age. At this point, your toddler doesn’t understand that even though you are out of sight, you are still close by. Instead, they think that once you’ve left the room, you are gone forever. This is understandably going to cause your child distress, leading to refusal to go to sleep without you nearby or frequent awakenings during the night.

How Do I Know If My Baby Is Having A Sleep Regression?

Common signs of a sleep regression include:

It’s common for your baby to take shorter and fewer naps as he or she grows older; however, if you notice other behavioral changes, it could be a sign that your baby is experiencing a sleep regression.

How To Deal With Baby Sleep Regression

Many babies will give cues that they’re tired. Some may yawn, others will fuss, and still others will arch their back. Recognizing the visual cues your baby is giving you and putting them to bed when they’re tired will help you get them to sleep more easily.

Put Your Baby Down Drowsy

One of the keys to managing a baby sleep regression is to foster sleep habits that will allow your baby to self-soothe and fall asleep on their own. Johnson advises getting your baby in a sleepy state, but avoid holding or rocking them all the way to sleep.

“Get them nice and cozy and drowsy, but then put them down semi-awake. That is the golden rule,” said Johnson.

Consistency is key in managing a sleep regression. Try to put your baby down for naptime and bedtime around the same time each day.

Likewise, establish bedtime cues that help your baby understand it’s time for bed. This can include singing a lullaby, reading a bedtime story, playing soothing music, and establishing a consistent bedtime environment.

If you need to check on or feed your baby during the night, avoid turning on the bedroom light. Instead use soft, dim lighting so that the room remains relatively dark. Just like adults, babies sleep best in environments that are dark, cool, and calm. This will serve as another cue for your baby that it’s time to rest.

When To Call A Doctor

Sometimes sleep problems can be a sign of an underlying health issue. If you ever notice your baby having difficulty breathing, you should call for medical assistance immediately. Other signs may include an inability to focus, snoring, or frequent night terrors. If you notice any of this behavior or if your baby’s sleeping issues persist, it’s time to consult an expert.

The good news is that most baby sleep regressions are normal and a sign that your baby is growing and developing. Though you may experience a few sleepless nights, the regression should be temporary and can be managed by helping your baby learn healthy sleep habits.

“You’re not alone. Other people are dealing with the same thing,” said Johnson. “But it doesn’t have to stay this way. Taking action, even if you’re doing baby steps toward better sleep, can make a world of difference.”