How to Train Your Cat to Sleep at Night (So You Can, Too!) 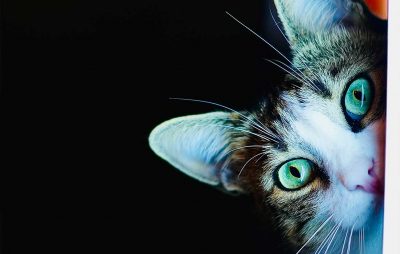 Imagine you’re comfortable in bed drifting off to sleep… when a heart-stopping howl and nails clawing at the door jolts you awake. It may sound like the opening scene of a horror film, but instead of a masked murderer, the identity of this dastardly sleep disruptor is your cat. But before sleep deprivation pushes you to the brink, consider a few simple changes to help train your cat to sleep at night—and get yourself some much-needed shuteye in the process.

When the lights go out, it’s not unusual for cats to amp up their hunting behaviors. This may include:

There are many reasons why cats moonlight as circus animals after dark, ranging from age, to diet, to personality and beyond. Marci Koski, a certified cat behavior and training consultant, says that while kittens get a burst of energy after a meal, older cats may become more sleepy and lethargic. In addition, she says most cats will fare best with several small meals throughout the day.

“A cat’s stomach is about the size of a golf ball, so they can’t really digest big meals as well,” she says. “Two meals a day really isn’t enough, so I usually recommend four to five smaller meals throughout the day. That way they can digest and then rest.” A cat that only eats two meals is likely to get hungry in the evening and come crying to its owner for a late night snack, while a bigger meal served later will act as a hold over.

Another common reason for midnight mischief is simple boredom. As a natural hunter, cats demand mental and physical stimulation. Koski says cat owners should aim to provide enrichment opportunities for their cats through play sessions.

“Try to find activities that bring out natural behaviors,” she suggests. “Cats shouldn’t sleep all day and look for things to do at night. Make sure the cat has access to plenty of toys, food puzzles, and vertical spaces for them to climb and explore.” Not only does play satisfy the cat’s need to seek prey, it also tuckers them out so they have less energy to expend later on.

It’s important to keep in mind that certain cat behaviors may be intended to communicate pain, anxiety, or overall health issues. Caterwauling may be a sign that the cat is experiencing digestive issues, a surge in hormones, insecurity, disorientation and cognitive malfunction, or other health problems. Of course, the howling may also be a dramatic demand for attention, but often caterwauling is an indication of a more serious concern. If this behavior persists and is accompanied by changes in appetite or litter box use, consider making an appointment with the vet.

How to train your cat to sleep at night

Cats are highly adaptable, Koski says, meaning organized and concerted attempts to adjust their schedule to a more human-friendly time frame has a strong likelihood of success. Persistence and consistency are key to getting your cat to sleep at night so you can, too. Koski asserts that with concerted effort over the course of a few days, cat owners can effectively shift their cat’s schedule and behavior by:

“Cats sleep about 20 to 22 hours a day,” she says. “But in the wild, they also spend time hunting, which uses up energy. The best thing you can do is get your cat on a regular schedule that includes hunting and eating.”

How to simulate “hunting” for your cat

Koski describes “hunting” as play that involves stalking and chasing something like a feathered or jingling toy. Cats like to pick up their prey, so ensure the toy is small enough for them to carry. Once the feline “catches” the toy, provide food to complete the hunting sequence. Try this an hour before you want to go to bed.

An outdoor cat can hunt up to 10 times a day, so it’s important to mimic these natural behaviors frequently and allow cats to express their natural instincts. The sequence of hunt-food-sleep is ideal for mature cats, Koski says, but kittens may need a reorganized sequence that looks more like food-play-sleep.

An automatic feeder can help achieve multiple feedings a day without too much time spent serving the cat, Koski says.

Why doesn’t my cat sleep at night?

Though cats are often considered nocturnal due to their post-dusk hunting tendencies, Koski says they’re actually crepuscular. That means these curious creatures are most active at dawn and dusk because that is when their prey is most active.

“Usually, when prey animals are out, it’s during lower light levels because they want to avoid being eaten by predators,” says Koski. “Cats can see really well in low light levels and take advantage.”

It may be tempting to rouse a napping cat awake during the daylight hours so they’re more tired at night, but Koski says this may backfire. “Don’t try to wake a sleeping cat,” she warns. “Disturbing sleep can cause mistrust or anxiety.”

After a run of several days without sleep, even the cuddliest kitten may be up for eviction. But with a few adjustments to the cat’s play and feeding times, the late-night prowls and howls can be mitigated. Commit to engaging your cat and you’ll be back to sleeping soundly in no time.

Aja is an Ohio native living in Los Angeles, where she fills her days with reading, exploring the outdoors, tracking down great food, and making art. She graduated from Ohio State University and considers herself a lifelong student because she loves learning about new things. A former television news journalist, Aja enjoys reporting across various mediums and has fun capturing video and photos of her experiences.