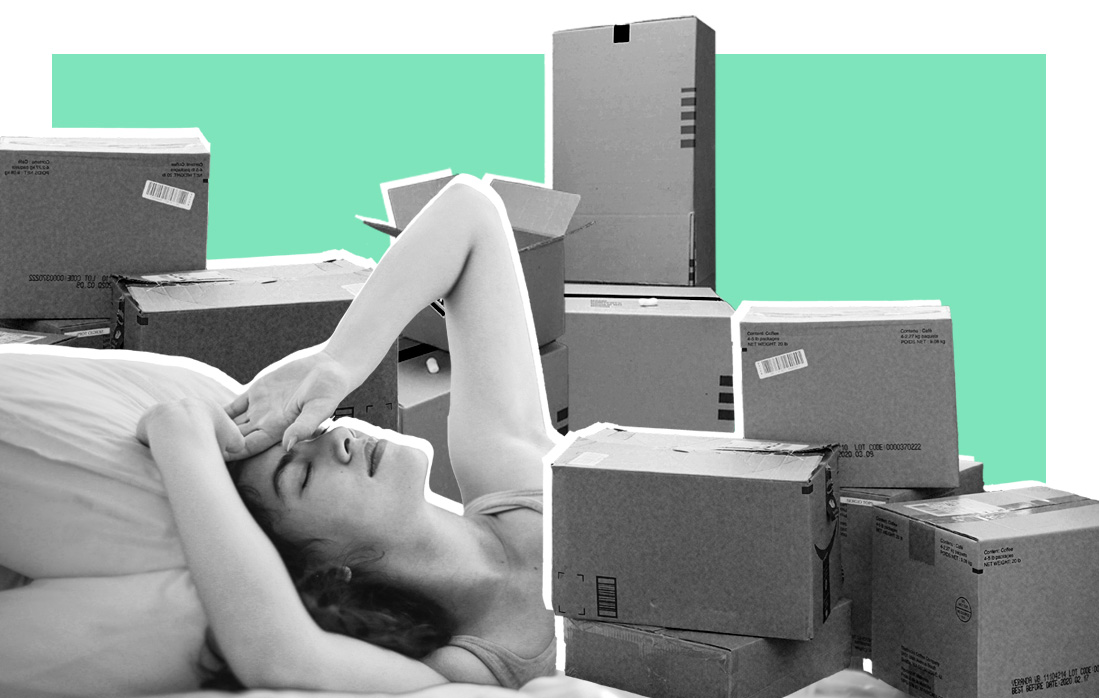 We’ve all been there. The three rolls of clear packing tape laying who knows where, those brown, cardboard boxes acting as bedside tables, and your whole life somehow fitting into a few dozen of them. Whether you’re moving across town or across the country, a move can change more than your home layout — it can greatly affect your sleep.

People are certainly not alone when it comes to feeling the pains of moving. On average, according to the U.S. Census Bureau, Americans move almost a dozen times in their life. Most moves happen between the ages of 18 and 45. This makes sense. Young adults tend to be on the move more, chasing the corporate ladder and starting adulthood away from home. People may only pack up their belongings about three more times after age 45 though, since people tend to be more settled in their lives.

In 2021, more than 27 million Americans got out cardboard boxes and moved to a new home. What’s interesting, is this was actually the lowest percentage of people moving in the last 70 years, even lower than in 2020. Unfortunately, more than half of everyone packing-up and hitting the road will not have good sleep, according to one study. Don’t stress though, we’ve put together a guide on how to avoid the tossing and turning. If you’re a frequent mover that want’s a great mattress that’s hassle free and easy to assemble, check out our best mattresses in a box guide. 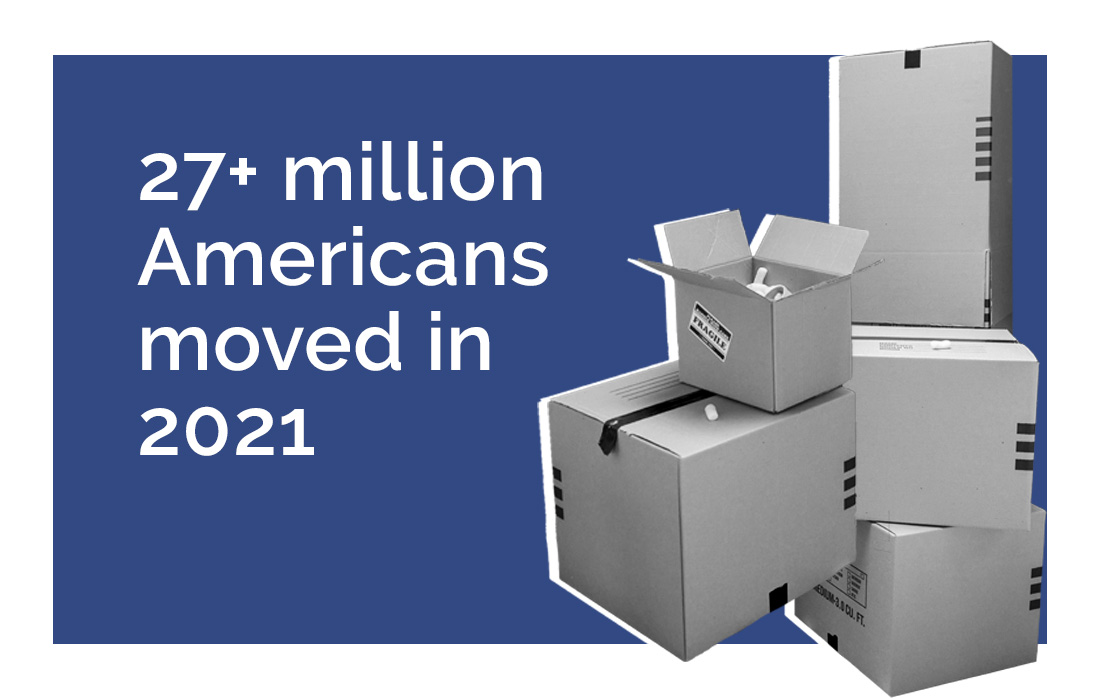 How moving can affect your sleep and why

Remember the time you had your first kiss, or the night before your first big job interview? There are probably some pretty sleepless nights around those big “firsts” in life. When it comes to moving, there’s something called the “first-night effect.” The first sleep in a new environment is usually just the pits.

Dr. Michael A. Grandner, director of the Sleep and Health Research Program at the University of Arizona, studies sleep for a living. He said there are many reasons moving can affect sleep, and the first one is obvious.

“Number one, moving itself is kind of stressful and requires a lot of work,” said Grandner.

After a long day at work or school, people come home to that “bedside table” box that needs to be packed. The hours spent putting things away and back up is enough to be a part-time job, plus finances can be a factor in moving and contribute to stress levels. However, it’s not just stress that causes sleepless nights while moving.

“A bigger impact moving has on sleep, though, is changing your environment,” said Grandner. “Many aspects of the environment that impact sleep, for example, temperature, light, sound, feelings of safety — all of these things in the environment can change when you move.”

Noise pollution can be worse, neighbors can be closer, and lighting is often different. Here’s the kicker: According to Grandner, adults wake up around 10 times a night, even on normal nights; it’s a safety mechanism early humans developed to check their surroundings. Luckily, most people have no recollection of these moments, but throw in a new environment (like moving), and the brain is likely to wake up. 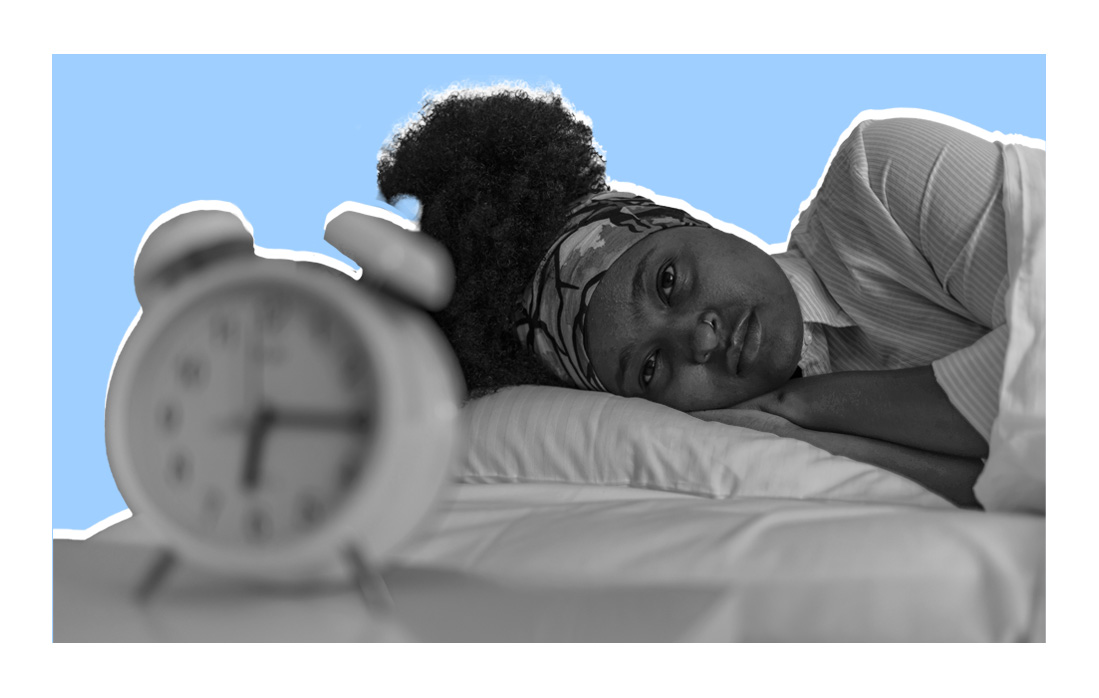 “You wake up very briefly, look around, maybe roll over and go back to sleep,” said Grandner.   “But, if you’re in an unfamiliar environment, you wake up, open your eyes, and your brain doesn’t see what it’s used to seeing. All of a sudden that could cause activation.”

This means, you’re likely to stay awake longer and remember the several times a night the brain is activated. The different stages of moving can trigger these responses, too. Even while sleeping in your “normal” room, the boxes can create different shadows, the room may have more echo, and a nighttime routine is thrown off. Same while traveling to the new home and in it. Until things are consistent and become “normal” again, the brain isn’t going to feel comfortable enough to get a great night’s sleep.

How long can it take to adapt to a new sleep schedule after moving?

Well, it can depend on how many time zones are crossed. Grandner said typically, it takes one day per hour of time difference to get sleep straightened out.

“If you’re shifting a time zone or two over, your body will adjust within a day or so,” said Grandner.

When it comes to adjusting to the new sights and sounds in a new home, that may take a bit longer. One survey by Healthy Sleep, which is affiliated with mattress retailer Amerisleep, found women had restless nights for an average of 16 nights after a move, while men tossed-and-turned for an average of 13 nights. Unfortunately, it may take about two weeks to feel fully rested again.

So, how can you get a better night’s sleep while moving? 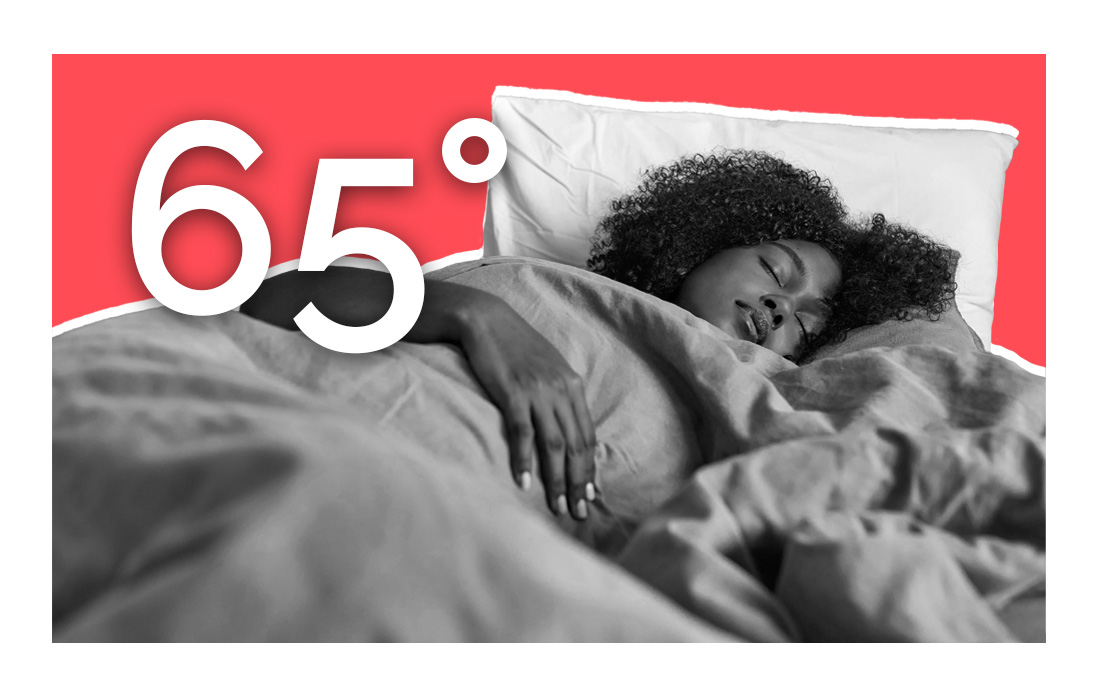 If the kids still can’t sleep after a move

If moving is hard for adults, it’s definitely tough on the kids. Setting them up for the best night’s sleep they can have while moving starts before the move even begins.

Talk to your kids about the move

The American Academy of Child and Adolescent Psychiatry (AACAP) said to help children with moves, parents should explain why there is a move, get kids familiar with the new place with pictures, and explain positives of moving — especially ones kids can get behind. Will the new house be closer to school, or will the move mean they are closer to friends? Is there a part of the house your kids will especially love, like a big backyard? The more detail, the more likely kids are likely to be excited about the move and be able to arrive in a place they feel they already know.

Stick to a routine

The more moves children experience, the more they may need stability in the family structure, which can include their nighttime routine.

“Try and stick to as much of your routine as possible because there’s value in the routine,” said Grandner. “The routine is also a signal to the brain that what’s happening is predictable, and it’s ending in sleep.”

He said even if the normal routine gets thrown off a bit, make the new routine consistent as quickly as possible.

As with adults, kids are likely to experience some sleepless nights. Heeding advice from Grandner, know this is going to happen and be prepared to handle it; adjusting to a new place will take time for everyone. The AACAP recommends getting involved with the neighborhood community, whether that is a religious organization, sports center, or group activity. Getting to know the people in the area you’re sleeping in will help everyone feel more at ease for a peaceful night’s rest.

Megan McNeil is an insufferable morning person unable to sleep past 8 a.m. An avid hiker and adventurer, she and her husband live life on the move with their cat, Fitzgerald, who is also a morning person. She is a two-time Emmy nominated former reporter. If she’s not writing, you can find Megan enjoying a local craft brew, reading a good mystery, and exploring the outdoors.