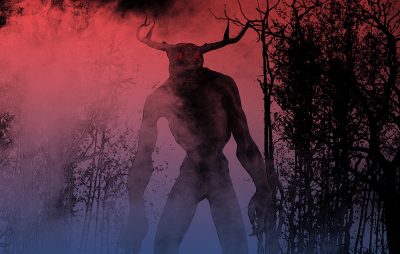 Legend has it that the Wendigo was a lost hunter. Facing starvation during a brutally cold winter, his intense hunger drove him to the taboo of all taboos—cannibalism. Shortly after feasting on human flesh, the man transformed into a beast-like creature, destined to roam the frozen forests of Canada and Minnesota in search of people to eat, never to be satisfied.

In a nutshell, that’s the story of the Wendigo. Today, it’s most certainly what we would call a myth, a legend, and even folklore. But while many myths and legends often fade with each generation’s passing, the Wendigo still captures our attention.

So what is it about this mythical creature?

The Origins Of The Wendigo

A Wendigo is a creature from Native American folklore, specifically, Algonquin-speaking tribes (such as the Ojibwe, Saulteaux, and the Cree). The word itself (“Wendigo”) comes from the Algonquin word meaning “evil spirit.” Wendigo folklore has been passed down through generations, and it remains a popular topic and subject of much speculation among indigenous peoples and scholars.

While the myth of the Wendigo varies from tribe to tribe, most Native American folklore describes the creature as a beast-like, humanoid creature that lives in the coldest parts of the world. Some people say that the Wendigo is a cannibalistic monster that feeds on human flesh, while others believe it is a vengeful spirit that punishes those who break the laws of nature.

What Is The Story Behind The Wendigo?

In the cold, harsh conditions of Northern winters, the threat of starvation always loomed large, so much so that cannibalism was not unheard of. Many scholars believe that the myth of the Wendigo was intended as a means to keep people from participating in such heinous acts.

In some versions of the legend, a human transforms into a Wendigo after their spirit is weakened by extreme conditions, such as hunger and cold (typical of the Canadian climate where the Ojibwe lived). In other legends, humans become Wendigos when they’re possessed by a prowling spirit in their weakest moments—anyone giving into greed, gluttony, and excess was a likely candidate.

In one particularly eerie version of Wendigo lore, legend has it that if one dreams of the creature, the body may become vulnerable to possession by the Wendigo spirit—and once the possessed person consumes human flesh, the body begins its own grotesque transformation into a Wendigo. That’s an unsettling version of the legend that might keep you up at night!

“The Wendigo was gaunt to the point of emaciation; its desiccated skin pulled tautly over its bones. With its bones pushing out against its skin, its complexion the ash gray of death, and its eyes pushed back deep into their sockets; the Wendigo looked like a gaunt skeleton recently disinterred from the grave. What lips it had were tattered and bloody. Its body was unclean and suffering from suppurations of the flesh, giving off a strange and eerie odor of decay and decomposition, of death and corruption.”

Wendigos are described as having long limbs, long, sharp claws, and teeth, and their eyes are said to be sunken in and glowing red. They are also said to have a long tongue that they use to lick their victim’s flesh and can shapeshift into other animal and human forms.

Is The Wendigo Evil?

Wendigos are powerful supernatural beings born from greed, weakness, and the worst parts of human behavior. Moreover, they’re driven by the insatiable desire to kill and eat their victims. Paired with the fact that the word “Wendigo” literally means “evil spirit” in Ojibwe, we think we can safely say: Yes, the Wendigo is indeed evil.

While there have been many reports of Wendigo sightings over the years, most of them were second-hand accounts or stories passed down through the generations.

One of the most famous stories of “Wendigo sightings” was in the early 1900s when a Cree chief named Jack Fiddler claimed to have killed 14 Wendigos in his lifetime.

Another famous story of a Wendigo encounter involved another Cree Indian named Swift Runner. As the story goes, Swift Runner murdered and ate his whole family during the winter of 1879. When caught, Runner claimed to be possessed by a “Wendigo spirit” at the time of the murders; nevertheless, he was hanged for his crime in December 1879.

Modern Portrayals Of The Wendigo

The Wendigo is a beast-like humanoid creature that possessed people when they gave into taboo practices, like greed, excess, and particularly cannibalism. While scholars believe that the myth of the Wendigo first began with Native American tribes seeking a way to promote a culture of moderation and cooperation, the legend continues to live on in popular culture, thanks in part, no doubt, to movies and TV.