According to the National Sleep Foundation and the National Commission of Sleep Disorders Research, about 40 million American suffer from some form of sleeping disorder. Many of them are undiagnosed. That’s almost 1 in 8 people – so among your extended family, the chances are high that one of your relatives suffers from a sleep disorder.

Note: The content on Sleepopolis is meant to be fun and informative, but it shouldn’t be taken as medical advice. Further, it should never supplant advice or recommendations given by trained professionals. If you feel you may be suffering from a sleep disorder, please contact your healthcare provider immediately.

Click here or on image to enlarge the infographic 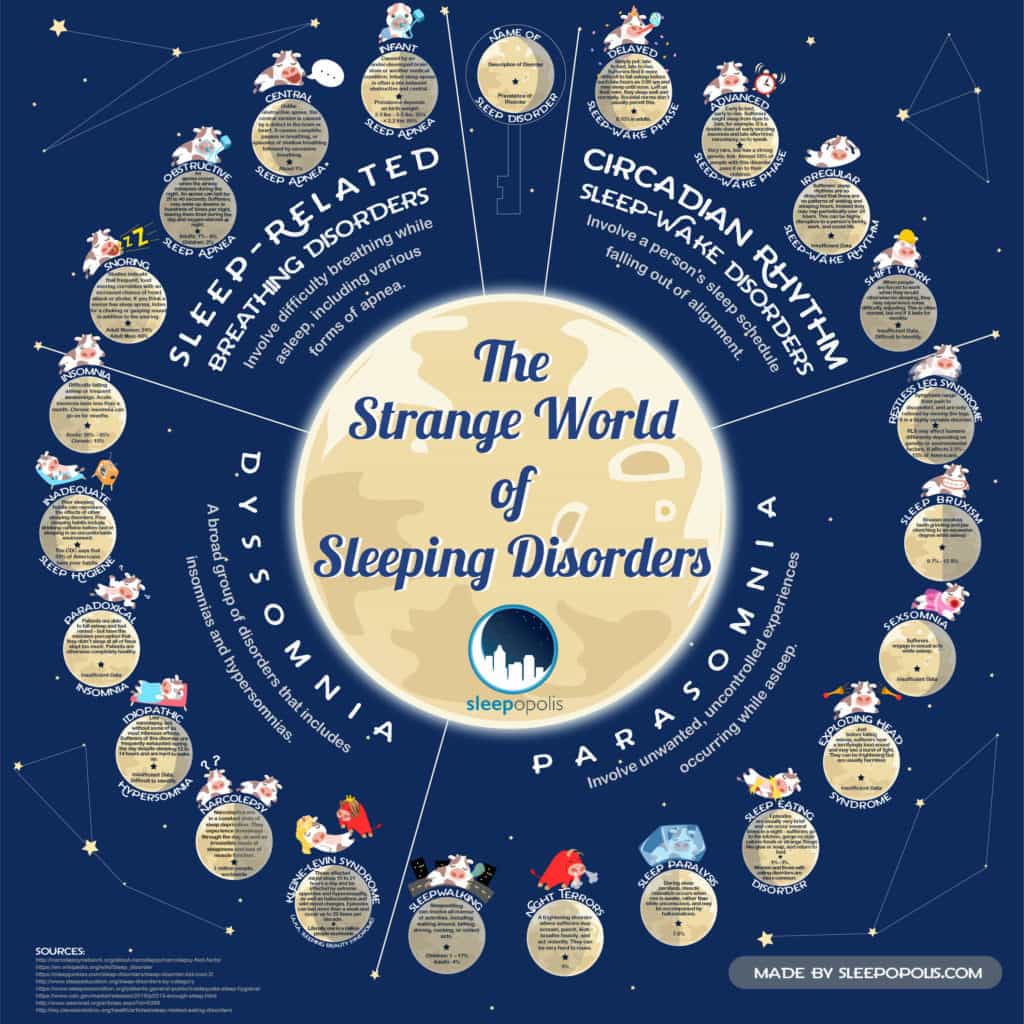 What do you imagine when you hear the term “sleep disorder?” Maybe insomnia or sleep apnea, which are two of the most common disorders. Or maybe you imagine something more exotic like sleep walking or sleep eating. But what about exploding head syndrome, sexsomnia, or night terrors? Let’s review some of the sleep disorders that Americans suffer from.

FAQ: What’s the Best Mattress for Back Pain?

As the description implies, this set of sleep disorders involves difficulty breathing while asleep. This includes several variations of sleep apnea.

These sleep disorders involve a person’s sleep schedule falling out of alignment.

These disorders sound inconvenient and some of them are life-threatening. However, there are two diseases (not disorders) related to sleep that are truly terrifying – Fatal Familial Insomnia (FFI) and Sleeping Sickness (African trypanosomiasis).

FFI works, at first, like regular insomnia. But over time, sufferers find themselves able to sleep less and less until they enter a waking coma and die. Sleeping Sickness is difficult to detect, since it the onset of its symptoms resemble a common cold or flu virus. However, over time, Sleeping Sickness passes through the blood-brain barrier and can do permanent brain damage.

They are as fascinating as they are deadly. Let’s take a look at how they work: