What Is Night Eating Disorder? Symptoms, Causes and Treatment 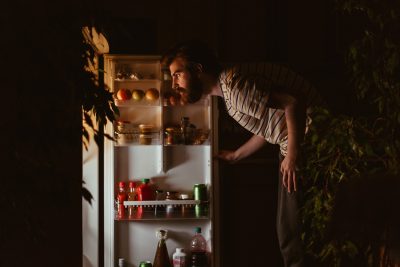 While quips about sneaking a midnight snack are common, for some people, it’s no joke—an overwhelming compulsion to eat at night can actually be a sign of an eating disorder known as night eating syndrome (NES).

Also known as night eating disorder, NES is different from other types of eating disorders, such as binge eating or even sleep-related eating disorders. NES can severely disrupt someone’s life and lead to complications such as obesity, insomnia, and mental health challenges. Fortunately, night eating syndrome is rare, but if your nighttime eating feels out of control, read on for more information about this disorder.

Jyoti Matta M.D., a sleep expert and the division chief of pulmonary critical care at Jersey City Medical Center explains that night eating syndrome is a compulsion to eat at night that feels uncontrollable. Unlike other types of sleep and eating disorders, with NES, the individual is fully awake and conscious of what they are doing—they feel like they must eat at night and that it’s necessary for them to eat in order to go to sleep or get back to sleep.

Doctors aren’t sure what causes NES, but it is thought to be related to genetics, mental health disorders (many people with NES also have other mental health illnesses, such as anxiety), and some circadian rhythm disorders that may influence when they feel tired. There may also be a link to some kind of trauma that spurs the disorder on. For instance, one study showed that people who had been victims of sexual abuse had an onset of NES that correlated to their attack.

According to Matta, NES is not that common—only about 1 in 100 people have NES. In fact, many people are able to seek help before the disorder progresses to middle-of-the-night awakenings to eat.

“Before this syndrome occurs, there are many symptoms related to eating that happen during the day, and a patient usually asks for help before it disrupts their nighttime sleeping and eating patterns,” she explains.

Night eating syndrome was first identified in 1955, and it has a few key characteristics:

Additionally, while night eating syndrome may look like a type of binging, actually binge eating disorder is a different type of eating disorder that’s triggered by anxiety and only occurs during the day.

And lastly, if you’re a nighttime snacker and wondering if you actually have NES, Matta explains that NES is different from simply eating at night. It can be normal if you’ve eaten an early dinner and need a snack before bed; with NES, you have an actual compulsion to eat at night that feels out of control.

How is night eating disorder diagnosed?

According to Matta, in order to diagnose sleep-related eating disorders, doctors will look for signs of other sleep disorders and sleep deprivation. They’ll also explore what medications, including sedatives, a person is taking.

The most important step to getting a diagnosis is being open and honest with your doctor about your symptoms. Many people with NES may feel shame about their eating habits and avoid seeking help.

Diagnosis is so important for those with NES due to potential long-term complications from leaving the disorder untreated. Matta explains that long-term impacts of NES can include:

The treatment options for night eating syndrome usually involve a combination of cognitive behavioral therapy and antidepressants, says Matta. “If someone is experiencing a sleep-related eating disorder—that’s where the person is eating while asleep and has no memory of it the next day—we try to determine if the patient is taking sedatives or other medications that can be the cause,” she adds. “We also try to determine if the patient has other sleeping disorders like sleep apnea or narcolepsy, which can disrupt sleep.”

Some people with NES may also find it helpful to implement and adhere to a good sleep hygiene routine that includes basic practices such as:

The bottom line is if you’re finding yourself with an uncontrollable urge to eat at night—and especially if it’s interfering with your sleep, linked to symptoms such as anxiety or depression, and eliminating your morning appetite—you should know that the cause might be an actual disorder, and treatment is available.

“If a person suspects they have a sleep-related eating disorder, or if they live with someone who has witnessed them sleep eating, they should see their primary care doctor or a sleep specialist,” Matta adds.

Chaunie Brusie is a mom of five, a native Michigander, and a Registered Nurse turned writer and editor. She specializes in health and medical writing. Her work has appeared everywhere from The New York Times to Glamour to Parents magazine.