Asking “Why Does Coffee Make Me Tired?” We Have the Answer and Solution

How Coffee Is Making You More Tired 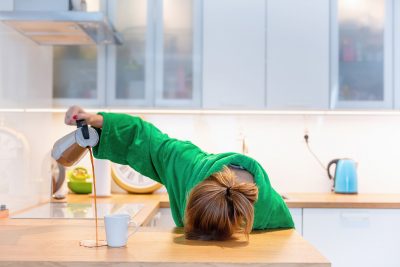 Coffee is the most popular drink in the world, with an estimated 2 billion cups consumed per day. Most people who drink coffee regularly do so to boost their energy levels and sharpen their focus. We can only assume that those who rely on coffee for their daily caffeine boost probably see it as fairly innocuous and delicious to boot. We’re right there with you.

But popularity aside, coffee, specifically the caffeine contained within, is a stimulant. And because it’s a drug, it affects each person differently. For some people, coffee works as intended, making them more alert, awake, and active. For others, caffeine has the opposite effect. Instead of boosting their energy levels, coffee leaves them feeling tired and sluggish.

So, if caffeine is a stimulant, how does coffee make you more tired? There’s a bit more to coffee than meets the eye—read on to learn more about your favorite morning brew’s relationship with sleep.

Why does coffee make me tired?

While some people can reach for a cup of joe and get the boost they’re looking for; others only end up feeling more tired after their afternoon coffee break. From wreaking a little havoc with some of the neurotransmitters in our brains to its diuretic effects, there are a few reasons why coffee and caffeine don’t quite work the way they should for some folks.

Coffee meddles with adenosine receptors in your brain

For those who feel tired after drinking coffee, it’s all about how caffeine interacts with the chemicals in your brain, specifically adenosine.

Adenosine works like a neurotransmitter in our brain. While we’re awake, adenosine levels gradually rise, eventually reaching the point where we feel sleepy. That’s why we all become increasingly tired as the day wears on. And as you might have guessed, adenosine levels in our brains decrease while we sleep. Ultimately, adenosine is a key player in our sleep-wake cycle.

So, where does caffeine fit into the equation?

Stephen Light, CEO, and Co-Owner at Nolah Technologies, a sleep technology company, explains, “People drink coffee and other caffeinated beverages to help them perk up in the morning or to boost them through an afternoon slump. However, consuming caffeine can actually make you feel more tired once it’s fully metabolized and the effects wear off.”

“Caffeine is a psychoactive compound that blocks adenosine receptors in the central nervous system,” he says. “Adenosine, a sleep-regulating chemical, makes you feel tired as it builds up throughout the day. Consuming caffeine prevents receptors from receiving adenosine, but it doesn’t stop its production. So, once caffeine’s effects wear off, the built-up adenosine binds to the brain’s receptors, causing tiredness. Think of it this way: caffeine doesn’t prevent tiredness; it postpones it.”

You have a higher caffeine tolerance

The unfortunate truth about coffee and caffeine is that they are often used either as a substitute for sleep or as a way to fill in the gaps. When sleep tumbles down on the list of priorities, many people will take it in stride because coffee can help them get over the hump.

The problem here is when this failsafe becomes standard operating procedure. Losing sleep night after night and reaching for more and more coffee day after day can ultimately lead to a higher caffeine tolerance. Similar to other drugs and alcohol, the more you consume, the more you’ll need to achieve the same result.

In this case, it’s not so much that coffee is making you tired; it’s just not making you as alert as it once did.

Caffeine is a diuretic

Most people who drink coffee will also find that they have a frequent need to urinate. And every time you do, you flush away some of the water and salt your body needs. This can lead to feeling tired for two reasons.

First, while mild dehydration can affect your cognition and mood, it can also deliver a powerful blow to your energy levels. “When you drink coffee or tea, the caffeine causes your body to lose water,” says Dr. Alice Williams. “This can lead to dehydration, which can make you feel tired and sluggish.”

Second, if you’re drinking coffee right up to the evening hours or right up to your bedtime, you’ll probably end up making frequent bathroom trips throughout the night. Those disruptions to your sleep will most certainly leave you feeling tired and fatigued the next day.

Caffeine triggers a stress response in your system

“Caffeine can cause a stress response in the body, which can lead to the production of cortisol,” says Dr. Williams. “Cortisol is a hormone that helps the body respond to stress. When you drink coffee or tea, the caffeine raises your cortisol levels. This can lead to feelings of anxiety and irritability.”

Digging a little deeper, Light points to studies that show “caffeine consumption activates the stress axis, increasing cortisol, glucocorticoid, and catecholamine secretion. In terms of physical side effects, this stress response may increase blood pressure and heart rate, heighten anxiety, and cause fatigue.”

You’re crashing from the sugar in your coffee

Starbucks and Starbucks-style coffee drinks have become big businesses. And while these drinks may be quite tasty, they often contain a lot more than coffee—think syrups, whipped cream, chocolate, etc. And while black coffee may be fine on its own, specialty coffee drinks loaded up with all those extra goodies are high in sugar.

Initially, the caffeine and sugar in your drink are likely to give you the boost you were looking for. But in the hours following your coffee break, you’re likely to experience a pretty powerful sugar crash, which will leave you feeling tired and sluggish.

Why does coffee make me feel weak and shaky?

Caffeine is a stimulant, so while it may boost your alertness enough to get past the 3 o’clock slump, too much caffeine can leave you feeling jittery and anxious. The science here is that caffeine trigger’s your body’s “fight or flight” response, subsequently prompting your adrenal glands to produce adrenaline.

Of course, chances are you’re not in any immediate danger sipping an Americano while sitting in your local Starbucks, so that adrenaline is essentially swirling around in your body with nowhere to go. And your cup of joe likely comes with a side of elevated blood pressure, palpitations, and maybe some sweatiness—aka the jitters. For those with caffeine sensitivity, these symptoms are typically heightened.

Dr. Williams notes that the coffee jitters could also be related back to our old friend adenosine.

“When you drink coffee or tea, the caffeine binds to the adenosine receptors, preventing them from working properly,” she says. “This makes you feel more awake but can also lead to feelings of anxiety and irritability.”

Do other caffeinated drinks have the same effect?

Dr. Williams notes that coffee is not the only popular drink in town when it comes to getting a caffeine boost. “You should also be aware that caffeine is found in many foods and drinks, not just coffee and tea. These include energy drinks, soda, chocolate, and some over-the-counter medications.”

How to use caffeine effectively

Hold off on your first cup of the day

If you normally reach for a cup of coffee first thing in the morning, you may want to hold off a bit tomorrow. This time it’s all about the cortisol levels in your body.

From controlling blood sugar levels to regulating metabolism and from playing a role in memory formation to affecting your body’s immune response, cortisol regulates a host of biological processes in your body. Cortisol typically reaches its peak levels in your body somewhere around 60 minutes after waking. And because this stress hormone has been closely tied to our levels of alertness, scientists have recommended holding off on your morning caffeine jolt until about 90 minutes after waking when cortisol levels begin to drop.

Coffee can actually be pretty good for your health. In fact, studies have shown that coffee can lower your risk of cardiovascular disease, increase longevity, and decrease your risk of depression. But just like with anything else in life, you can have too much of a good thing.

The Food and Drug Administration (FDA) recommends limiting your caffeine consumption to no more than 400 mg per day, which roughly translates to about 4 to 5 cups of coffee daily.

Remember that caffeine can be found in other foods and drinks, though—there’s a good chance you’re getting a part of your caffeine fix outside of your daily cups of coffee.

Energy drinks and coffee typically have the same amount of caffeine. But energy drinks are packed with sugar and other proprietary ingredients that may not be so great for you. Remember that sugar and caffeine can compound each other’s effects, making you more tired instead of alert and awake.

Healthy adults should aim to drink about 4 to 6 cups of water per day. While it may be tempting to substitute a few of those cups with coffee, that’s not such a great idea. Remember that coffee is a diuretic, so you’re likely urinating out a lot of salt and water throughout your day. Drinking plenty of water is a good way to replenish those fluids and counterbalance any effects of mild dehydration you might be experiencing.

How to wake up without caffeine

Coffee might be a tasty and effective way to jump-start your day, but there are some other things you can do to wake up without caffeine. Whether you’re trying to cut back or break the habit altogether, consider the following:

A word of caution

Coffee has undoubtedly become a part of our collective culture. It’s not only a beverage but also a means of connecting and socializing with others. Moreover, it’s readily sold in every grocery store, and coffee shops dot the landscape everywhere you look.

It is worth noting, however, that just because coffee is not a controlled substance, it doesn’t mean that it’s not a drug, or that it’s less likely to lead to addiction. Coffee is generally considered safe for consumption but can be unsafe in very high doses.

Again, 4 to 5 cups of coffee per day or 400 mg of caffeine is considered fine and healthy. If you’re consuming anything beyond that, you may want to speak to your doctor or consider making some healthy changes that taper back on your daily intake.

Coffee is the world’s most popular drink. And while most people reach for it to boost their energy levels and alertness, it can have the opposite effect for some, leaving them tired and sluggish instead. For those in the latter category, caffeine’s interaction with adenosine in your brain, robust tolerances, and sugar crashes from sweet caffeinated drinks could be to blame. If you find that coffee doesn’t quite do it for you, you can try a few lifestyle and dietary changes to help keep you alert and focused in the mornings and throughout your day.