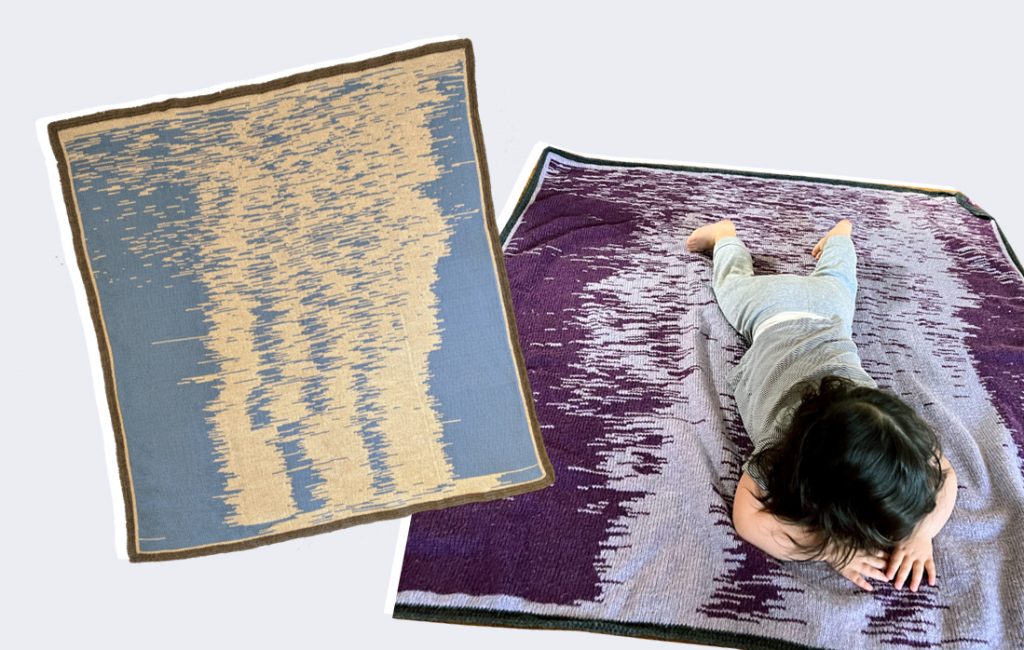 A newborn wreaks havoc on everyone’s sleep. Parents try to adapt and understand what their baby’s sleep patterns and sleep needs are, and adjust their own sleep schedule but sometimes it just feels like a mind boggling, exhausting crisis.

Seung Lee started trying to understand this process by knitting blankets that visualized his baby’s sleep. And his tweets gained a lot of attention. 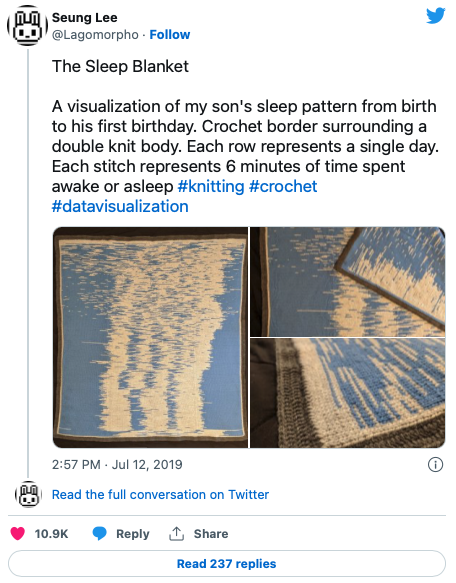 In this tweet Lee explains that by tracking his kids’ sleep, he and his wife were able to understand more about why their kids were upset or what they may need. He created and shared two blankets, one in 2019 for his son and the completion of his daughter’s this year.

Lee’s ultimate motivation behind creating these blankets, though, comes from that elusive thing that’s really hard to capture, a parent’s love.

He told Sleepopolis, “It was a confluence of so many different things that motivated me to make my son’s blanket! But the thing that stands above the rest is that I will never get tired of telling my kids how much I love them and this was just another way I got to do that.

He continued, “So when my daughter was born, naturally I wanted to do the same for her. Sure there were some technical improvements/knitting techniques I wanted to try out but I loved how my son’s blanket told his story and I wanted to tell hers too. I get to remember and cherish that time together every time I see them.”

Each row on the blanket represents a single day and each stitch represents six minutes of time spent either awake or asleep. The blanket is read from top to bottom and left to right. The darker color represents time asleep, with the lighter color being time awake.

Visually you are able to see the similarities and differences between his son and daughter’s sleep. The tops are similar with the randomest of sleep and awake time. In a tweet he points out that he can tell they were more consistent with his daughter’s bedtime. Due to this, his daughter woke up earlier too. He further mentions that he can point out specific shifts in their sleep and explain why that happened.

A tweet explained that Lee collected their sleeping data through a comprehensive baby tracking app, Baby Connect,. He would then export the data to create a visual pattern of his children’s sleeping pattern. 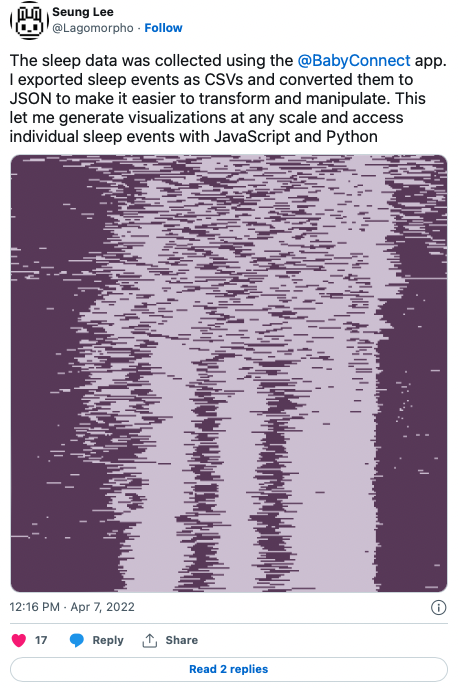 When Lee started to knit the first blanket, he created smaller panels that he knit to create the blanket. The second time around, Lee decided to knit his daughter’s blanket all at once, which he found saved him about a week. He also prefered the consistent look of the single knit blanket.

One of the biggest differences between this change was while knitting the blanket it got bigger much faster making it harder to transport while working on it. However in a tweet he stated, “luckily I was mostly carrying it between my desk and the couch.” 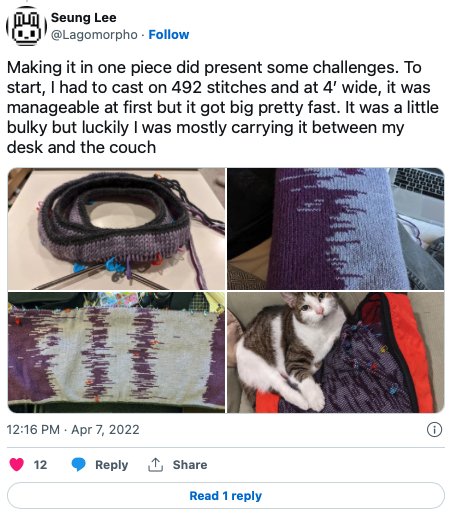 Due to this change, he also had to rebuild his pattern tracker. To avoid having to do the math in his head, he added a progress tracker that logged his pace and projected completion.

On both twitter threads, Lee shares his joy with completing the blankets and giving them to his children. While it is a long project, it’s something his kids will have forever. 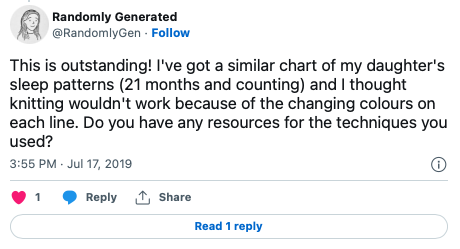 Lee explained his advice is, “patience and pacing. It’s a big long project, more of a marathon than a sprint. Figure out what you can reasonably get done in a day and aim for that. If you do more, great. If not, also fine. It may not look it but knitting is still a physical activity that takes its toll on your body. Trying to do too much or powering through discomfort can cause an injury and stopping progress altogether is not worth the extra bit you might get done if you push yourself.

With this huge project now being done, we asked Lee if he’s working on any new projects,“I usually have a few projects I’m thinking about but nothing I’m actively working on. Both kids started school this month so that’s been my priority.”