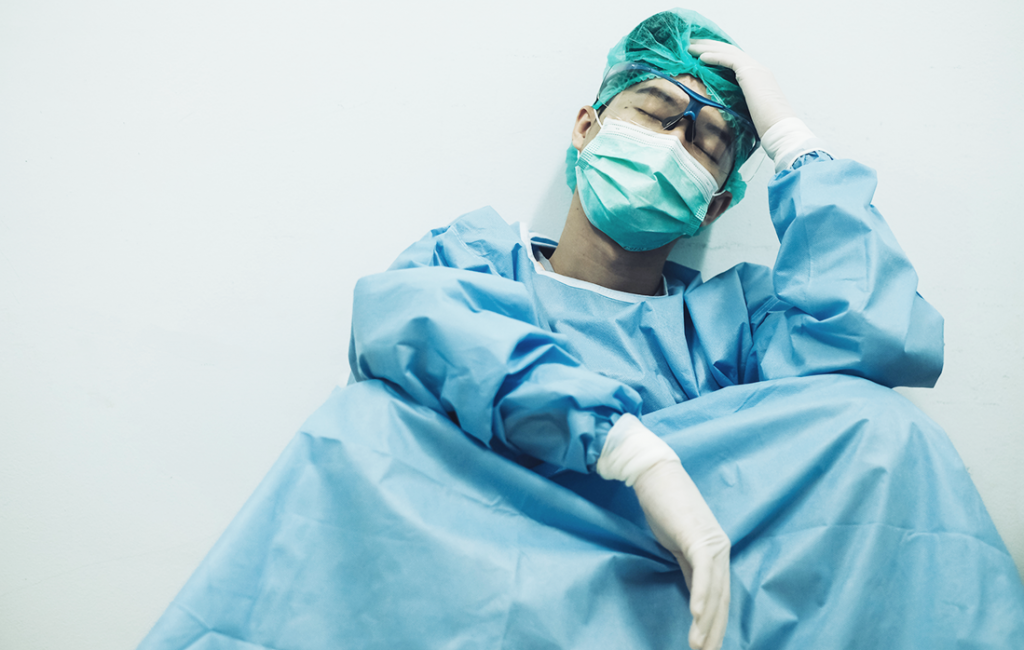 A New Zealand woman in her 60’s went to the doctor with stomach pain and nausea in 2017. A set of x-rays later revealed a mass on her lungs, according to the technician. But her doctor never read the technician’s note, and, thus, never treated what turned out to be terminal lung cancer. In an interview with the NZHerald, the emergency room doctor admits to hitting the “acknowledge” button without reading the report. He pointed to his exhaustion at the end of his shift as the reason for the oversight. Three years later, the woman returned to the hospital and was diagnosed with lung cancer.

This story is, sadly, not an isolated event. But it does shed light on a widespread international problem of fatigue in the medical community, exacerbated by a healthcare shortage caused by the COVID-19 pandemic. In addition to fatigue and exhaustion, 61 percent of healthcare workers had feelings of burnout in 2021, the Lancet reports, which is characterized by related symptoms such as an inability to focus, and can lead to insomnia, substance abuse, and more.

100,000 to 200,000 deaths every year in the U.S. are attributed to medical errors, according to Stanford researchers. They surveyed 6,695 physicians, finding that 55 percent had symptoms of burnout like exhaustion, and that 10 percent had at least one major medical error in the last three months.

Long Shifts, Substance Abuse, and The Impact on Sleep Schedules

But doctors aren’t tired just because of long work shifts, which is part of the problem. Sometimes those with burnout turn to substance abuse, and a recent study showed that one in seven physicians admit to consuming alcohol or controlled substances while at work in the last three months. Twenty-one percent say they consume substances multiple times per day. All of this leads to not only exhaustion, but substance hangovers which inhibits performance and focus.

Dr. Kate Daly, Medical Director of All Points North, which conducted the study, says burnout can result in sleep deprivation, substance use, overwhelm, apathy, cynicism, and feeling detached and ineffective with little sense of accomplishment.

A Callout For Change

APN’s CEO, Noah Nordheimer, says that he sees the findings as a callout for change, highlighting the “immediate need for quality care, resources, and mental health advocacy in this country, in the healthcare industry and every other industry.” The irony, he points out, is that doctors who are so much more well-connected to resources in health and mental health care, are suffering too, over fear of losing their license, being judged by family and colleagues, and being too overwhelmed to work out their burnout and therefore, exhaustion, the study showed. Nordheimer added that some said the system is too broken and too hard to navigate.

All of these signs can leave patients wondering, the next time they head in for a medical procedure, just how well their own physician slept the night before. They might wonder if they’ve had too many drinks, what medicines they’ve taken, and if they are focused enough to perform sometimes life-saving procedures, or if burnout is just too widespread to be able to trust their medical professional’s abilities.

Dr. Anthony Youn, a Detroit-based plastic surgeon and writer, also called attention nearly a decade ago to an ongoing problem that still persists — exhausted residents, in their most trying years of medical school, falling asleep on the job. He wrote, “Confession: I’ve fallen asleep while operating on patients,” and he goes on to point to the demanding rigors of residency. In 2017, the Atlantic called attention to this issue, as residents’ shift lengths increased to a brutal 28 hours per shift, and an average of 80-hour work weeks. Now, advocacy groups are working hard, dedicating millions of dollars, to initiatives to alleviate burnout, cope with post-COVID-19 effects, and access mental health resources.

How Patients Can Protect Themselves

So whether it’s your tried and true physician of many years, or a resident you are letting learn through your care, patients might question their health care professional’s level of sleep, and exhaustion. Here’s what to do if this is a concern for you.

In the end, the likelihood that your doctor, especially one you trust, is falling asleep during a procedure isn’t likely. But, it’s worth being observant of the issue as hospitals continue to face short staffing, and burnout runs rampant.