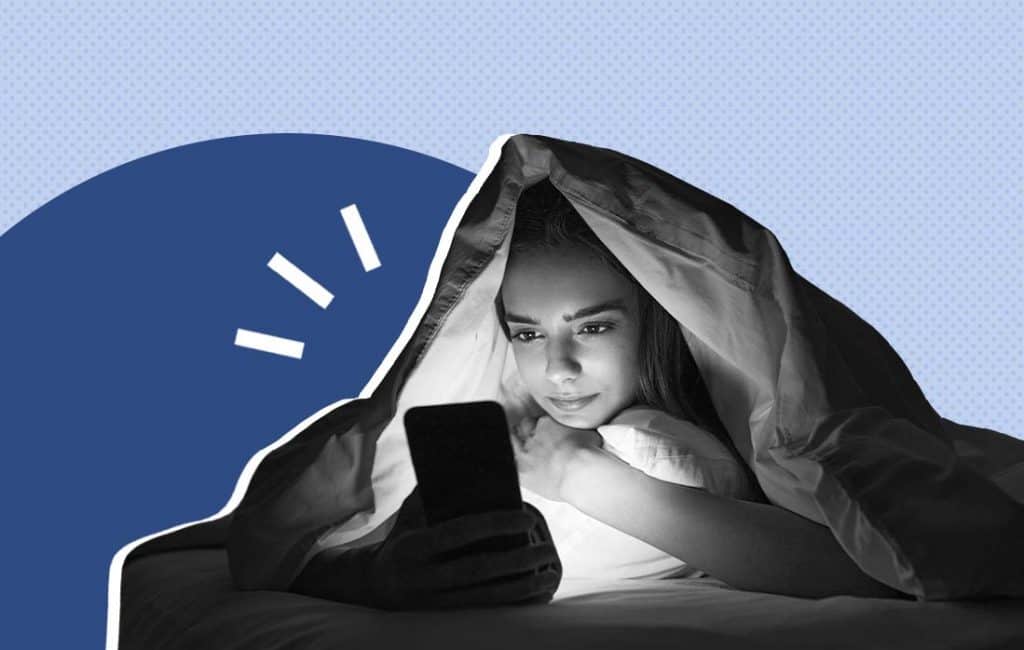 Sometimes at the end of a long day, you just might want to fall into bed and do some mindless social media scrolling. Funny TikTok videos, a friend’s new Insta outfits, doomscrolling on Twitter, whatever it is that keeps you scrolling can feel like some serious stress relief. But before you know it, a few hours pass, and you are attempting to fall asleep way past your bedtime. A new survey from the American Academy of Sleep Medicine shows that this is a very common experience, if not a lifestyle, for Generation Z, which, for purposes of this survey, includes ages 18-24. Ninety-two percent of people in this age group, of the 2,010 adults surveyed, say they lose sleep thanks to social media.

While it might not seem surprising to those who know the addictive nature of social media, the numbers point to a potential cause of the massive sleep deprivation epidemic Gen Z is reportedly experiencing, whose sleep struggles have been well documented in recent years. One-third of Gen Zers say they are losing sleep due to the “Sunday Scaries” and work concerns and 80 percent of them admit to napping on the job. In a study on the addictive nature of social media, researchers concluded this age group loses much more than sleep — college students addicted to social media demonstrated declines in academic performance, time management, focus, and self-esteem as well.

Dr. Po-Chang Hsu, medical sleep consultant and advisor at SleepingOcean says our drive to scroll at night time makes sense. “Most content online (especially on social media) is designed to be easy to consume, catchy, and bite-sized (short videos, posts, or simply pictures). This applies to TikTok as well, as the platform typically contains short 15- or 30-second videos. Consuming such small bites of content in a row without interruption makes the whole process more engaging and, in some way, a bit addictive.”

Hsu adds that uninterrupted bite-size content gives us a distraction from the real world, and our worries, which makes scrolling seem like a relaxing activity before bed.

“It’s also worth mentioning that our brain longs for more knowledge. So, when scrolling through social media or TikTok, the brain wants to scroll more, seeking information. That’s why we often have a feeling like we simply can’t stop scrolling. That’s just our brain being curious for extra information.” The problem, Hsu adds, is that it leads to cognitive and emotional arousal, which is the opposite of what we need before bed. It makes us more alert, rather than allowing our minds to wind down, he explains.

“Instead of getting the 7-8 hours needed for energy restoration, people may sleep for only 5-6 hours because they get sucked into this loop of scrolling,” he says. And while that small amount of sleep deprivation might seem like no problem, even just an hour of lost sleep can result in serious mood change the next day. Sleep deprivation long term can lead to mental and physical health problems as well.

Hsu says that researchers are still exploring why Gen Z is more apt to this issue, but one theory is their tendency towards boredom, having grown up as digital natives used to notifications and social media exposure around the clock. “This forces them to crave this constant stimulation, making this generation more dependent on social media and TikTok,” he says.

Psychiatric nurse Angel L.A. Adams at Premiere Mental Wellness says it’s about the “feel good” chemical dopamine hit social media gives us — “a sense of pleasure,” that overrides even our need for sleep, if it was up to us.

“It is a part of the reward system in the brain, so when released, it causes you to want to experience that feeling repeatedly. So, something as vital as sleep can be put on the back burner for a night of scrolling because the body is now craving dopamine and knows it can get it,” she says.

The survey also demonstrates a notable difference between lost sleep for women, more so than men — 83 percent of women compared to 77 percent of men. Dr. Lloyd Glauberman, Clinical Psychologist and Inventor of Lifestyle Intelligence (LQ), points to women’s typically social nature and need for community connection as a potential cause. “Digital communities are very powerful, and nobody wants to be left out,” he says.

Natalie van Winden, a 24-year-old woman in Los Angeles, is one such Gen-Zer with a tendency to scroll right past bedtime. She finds herself scrolling out of habit, opting for Instagram but mostly Tik Tok.

“If it’s a normal night and I’m not too stressed, I’ll scroll for at least 30 minutes, but if I have something on my mind or ‘revenge procrastinating,’ I’ll find myself scrolling for at least an hour,” she says. She thinks women lean into traditional social media platforms more often than men in general, such as Instagram, making them more likely to scroll at bedtime but also anytime.

Adams agrees, saying, “Females in this age group are shown to outnumber males in the amount of viewing hours on social media throughout the day and night. What is one primary cause? Social media influencers. According to recent research, more than half of Gen Z girls would quit school or their job to become social media influencers,” she says. “These content creators can influence everything from what they purchase, and how they look, to how they act. These girls look up to influencers and look to them to form their opinions on things, which in their eyes, is essential in forming their identities. Males don’t seem to show as much interest in influencers on social media as females.”

There are additional potential connections between women’s social media addiction impacting bedtime. Women already suffer from higher rates of depression symptoms, including trouble sleeping at night, and daytime sleepiness, the American Academy of Sleep Medicine reports. This could lead to scrolling before bed to connect with others, but also because those who struggle with insomnia might feel like they can’t sleep anyway, so why not. This presents a cyclical issue, because social media and blue light consumption before bed are linked with insomnia, but insomniacs might go ahead and scroll when there’s nothing else to do in the middle of the night.

Winden’s one of the lucky ones who doesn’t seem to experience insomnia after turning off her phone, a source of blue light sometimes connected with sleep issues. But sometimes in the morning she regrets not going to bed sooner. “I can really feel that during the [next] day.” She says for Gen Z-ers, having their phone in their hands at all times is most comfortable, and having it in bed is a natural extension to that.

“So checking our phones at night is almost like a final due diligence before bed,” she says, noting her mother would never scroll before bedtime. She isn’t in a hurry to change her before-bed routine on a daily basis, but does engage in social media breaks for a week or two at a time periodically, during which she does notice she gets better sleep.

Changing social media scrolling habits for improved sleep and observed bedtime might not be easy, at first. One study showed that of Tik Tok users, over 30 percent are at risk of developing an actual addiction to the platform, where they can’t resist opening and scrolling, PsyPost reports. Even those who aren’t technically addicted have to find other ways to get that dopamine hit Adams referenced. She adds that it’s not that you have to stop social media entirely, but just get all your scrolling done by one hour before bedtime, to prevent developing insomnia, which she says is also directly linked to other mental health concerns.

Hsu says van Winden is on the right track when it comes to looking at breaking addictions that impact pre-bedtime routines, and sometimes the easiest way is to get addicted to something else.

“For Gen Z, I would suggest coming up with a substitute for social media for the nighttime if they want to get their sleep back on track. It should be a relaxing activity that doesn’t involve screen use but can be something they look forward to. For instance, they can spend some time on their hobbies, meditate, listen to soft music, draw, journal, do some beauty procedures (a face mask, for example), stretch, read, and so on,” he says. “The key is to pick something they truly enjoy (in other words, something that can make them forget about social media for some time).”