When it comes to buying bedsheets, the options have expanded far beyond just cotton. While still a firm favorite and solid choice, there are new bed sheet materials attempting to challenge its crown. Two such options are bamboo and Tencel.

There are many similarities between the two bedsheet fabrics, from raw materials, to production processes, to their final properties. Making a decision between the two is trickier than ever! Here is a comprehensive guide comparing bamboo and Tencel in order to help aid your decision. 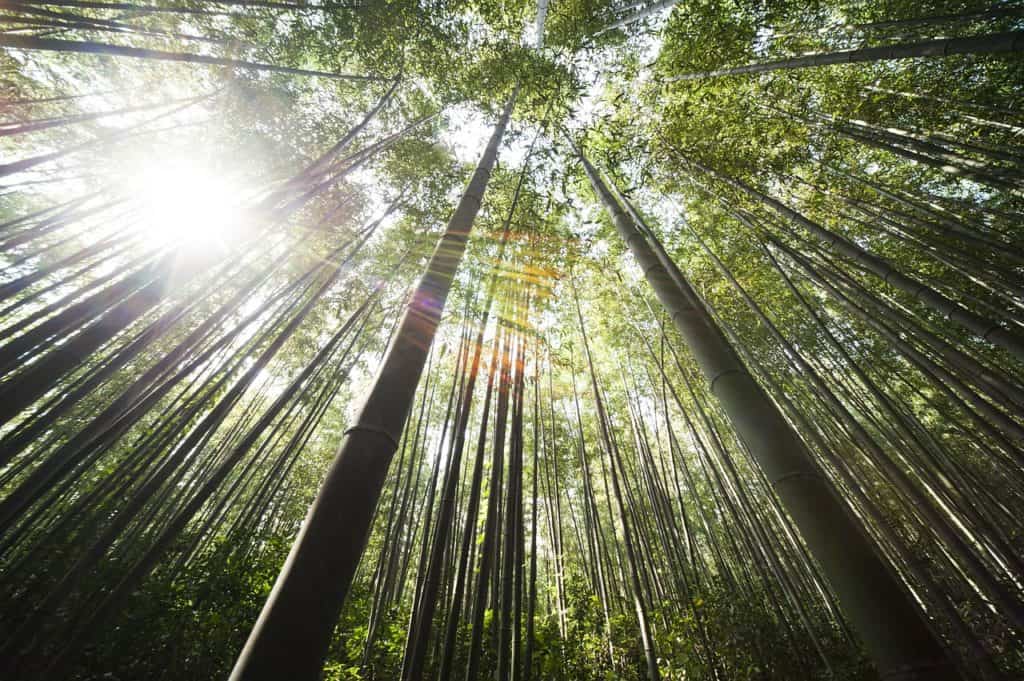 Bamboo is botanically categorized as a grass rather than a tree, although the fibers of the plant are more conventionally wood-like.

The plant is turned into fabric in two ways – mechanically or chemically. The mechanical method crushes the bamboo manually into a mush, then uses natural enzyme to further break it down. The fibers are then combed out and spun. Mechanically treated bamboo is sometimes called bamboo linen.

Chemical treatment of bamboo begins by “cooking” the bamboo in caustic soda or lye in a multi-step process. It’s quicker, but has more environmental impact thanks to the harsh chemicals used. Bamboo produced through chemical treatment is sometimes called bamboo rayon.

Tencel is also created from wood pulp – typically from eucalyptus trees. What makes it unique as a material is its manufacture process.

It’s made of regenerated fibers, which means it’s made by dissolving the cellulose fibers of a plant with chemicals, then making them into more easily woven fibers again. Tencel production uses environmentally friendly and non-toxic solvents, making its production particularly “green.”

Another environmental boon of Tencel is what it calls the “closed loop process.” This means that almost all of the solvents used in the production are recovered and don’t leak into the environment.

One huge benefit of bamboo bedsheets is their environmental soundness. Bamboo is one of earth’s fully sustainable wood sources – it can grow up to a yard per day. When the bamboo is harvested the roots of the plant are not destroyed, so it can continue to grow. Plus, bamboo is one of the fasted growing woods in the world.

Bamboo bed sheets also have many benefits in terms of comfort. They have an extremely soft and smooth feel, thanks to their makeup of longer fibers. They “wick” moisture away from the body, meaning you won’t feel sweaty or clammy. Bamboo sheets are very breathable, too. They don’t trap heat close to the body, which is great both from bed sharers and for those who live in warm, humid climates.

Bamboo bed sheets wash well at low temperature and don’t require fabric softener or any special washing care. They also dry very quickly, making the ideal for those in smaller apartments without a washer-dryer. When looked after properly bamboo sheets are very durable, and can last a long time.

There are also some health-related benefits to bamboo sheets. They’re both antifungal and antibacterial. They’re generally hypoallergenic and resistant to dust mites. Bamboo sheets are also much less prone to mold, mildew and odor than traditional cotton.

Bamboo bed sheets can be somewhat pricey. The range is similar to that of top quality cotton. However, when looked after properly, like cotton, they can last a really long time.

Aesthetic-wise, bamboo bed sheets can be more prone to wrinkling, due to their softness and suppleness. They also lack the “crisp” bedsheet feeling, which is a matter of personal preference.

Tencel is one of the best environmental choices when it comes to bedsheets. Not only are the eucalyptus trees it’s made from a (generally) sustainable energy source, but the production process both avoids use of dangerous chemicals, and stops the solvent they use leaking into the environment.

Tencel bed sheets also have a very smooth and soft feel. This is because it using long fibers and thus has a smoother surface. This is not only comfortable, but may be really beneficial to those with sensitive or easily-irritated skin. These fibers are hydrophilic, which means they literally “love water,” so Tencel is very absorbent and hygienic.

There are also benefits to Tencel in terms of breathability. It’s ideal for warm sleepers, and actually has a cool feel to the touch. It takes dye well, and is less prone to wrinkling. Tencel tends to have a lustrous and less matte look.

Like bamboo, Tencel can be expensive, and the range of price within Tencel is not very broad.

Tencel also lacks the feeling of “crispness” some desire with their bedsheets. Instead it’s softer and more drapey.

Because of the hydrophilic nature of Tencel fibers, it can be slightly more susceptible to mildew. If cared for properly, though, this shouldn’t be a problem.

What Are The Main Differences Between Bamboo And Tencel?

A major difference between the two is the solvent used in the dissolution process (which turns wood into pulp). In chemical bamboo production, the solvent is sodium hydroxide, which is classified as corrosive. Although this substance will not remain on the bed sheets, it can be harmful to the surrounding environment. Tencel uses a solvent called N-methylmorpholine N-oxide, or NMMO, which is generally not considered as harmful to the environment. Tencel also recycles 99% of the water used in its production, but no such figure exists for bamboo.

Overall, it seems Tencel has the environmental upper hand on bamboo – although bamboo is significantly more sustainable and less polluting than materials like cotton.

The feel of Tencel and bamboo bedsheets are generally similar – soft, smooth and strong. Neither have the crisp feel of cotton. Here bamboo may have a slight upper hand, though, due to the small potential for mildew in Tencel.

In terms of Tencel, one of our favorite sets of sheets is the Malouf Woven Tencel Sheets. They’re good quality (scoring an A+ on our testing scale), with the softness, smoothness and cool feel you’d expect from Tencel. Plus, they come with an affordable price tag (around $90 for a Queen).

For bamboo, two great options come from Purple and Nest Bedding. The former are a spandex and bamboo blend, which makes them easy to take care of and less prone to wrinkling, while the latter are made of high-quality 100% bamboo fiber.

8 thoughts on “Bamboo Vs. Tencel: Which Is the Better Material for Sheets?”

Save hundreds this holiday shopping season on our top-rated mattresses and sleep accessories.