Baby Sleep Safety: Everything to Know in 2022 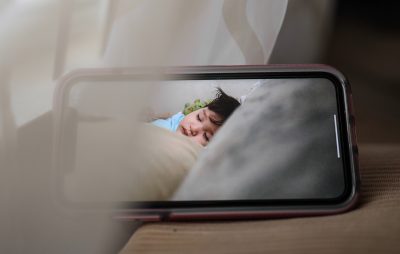 For most parents, a child’s health and safety is a top priority. But new parents may receive conflicting advice from literature or well-meaning relatives. So who is to be believed, and what should you actually be doing to keep your child safe? Since newborns spend most of their time (about two-thirds of the day) sleeping, here’s a breakdown of best practices when it comes to baby sleep safety.

Why is baby sleep safety important?

Infant sleep safety is essential for preventing sudden unexpected infant death (SUID) and sudden infant death syndrome (SIDS). According to the Centers for Disease Control and Prevention (CDC), about 3,400 babies in the United States die in a sudden and unexpected manner annually. Many of these deaths take place when the baby is asleep or in their sleeping area. That’s why it’s imperative that you take precautions and practice safe sleeping habits with your baby.

What is the safest position for a baby to sleep?

A baby should be placed on their backs on a firm, flat surface when they are laid down to sleep. “Putting babies on their back keeps their airway open, which then can prevent suffocation of any kind,” says Lori Strong, certified child sleep consultant with Strong Little Sleepers.

Strong notes that if a baby is placed on their stomach and gets in a compromised position, there’s no guarantee they will be able to turn their head to release themself from that position. “So ‘back to sleep’ is the mantra we use to encourage families to put babies on their back,” she says.

A baby can be placed on their stomach when awake for supervised tummy time or when they are old enough to roll over on their own. “If they can get to their tummy, we let them stay there,” says Erin Summa, Health Promotion Program Manager at Mary Bridge Children’s Center for Childhood Safety. “But for the whole first year, we start them on their back. We’re going to make them do the work,” says Summa.

Parents should also avoid swaddling their baby when they exhibit signs of being able to roll over onto their tummy, which typically begins happening between two and four months of age. “The worst-case scenario is a baby who’s swaddled with their arms down and then they get face down on a mattress without being able to rescue themselves,” says Summa.

When is my baby at highest risk of SIDS?

SIDS can occur any time during the first year of life. However, most deaths occur in babies between two and four months of age, and 90 percent of SIDS deaths happen before a baby is six months old.

While some studies purport to identify contributing factors, the exact causes of SIDS are largely unknown. However, there are certain risk factors for SIDS, including:

Low birth weight refers to babies born with a weight less than five pounds, eight ounces. It is often caused by premature birth and can lead to health complications, including a higher risk of SIDS. Receiving routine prenatal care, following a healthy diet, and abstaining from drugs, alcohol, and nicotine during pregnancy are essential to decrease risk of low weight at birth.

Some research suggests brain abnormalities, particularly in the area of the brain that influences breathing and heart functions, could contribute to SIDS.

Other research indicates that infection and inflammation are contributing factors in SIDS, with respiratory infections thought to lead to rapidly developing hypoxemia. One study notes, “Treatments such as supine sleep position could be helpful because they decrease the infant’s exposure to bacterial toxins.”

Family history and genetics may also play a role. According to the Mayo Clinic, babies who have had siblings or cousins die of SIDS are at higher risk.

Caretakers should keep babies away from smoke after birth due to the risks of secondhand smoke exposure, just as pregnant people should avoid smoking during pregnancy. According to the CDC, smoking in another room does little to protect a baby from the dangers of secondhand smoke. The best thing you can do is make sure your home or apartment is smokefree.

Overheating is another risk factor for SIDS. Parents should avoid covering their baby’s head when they’re sleeping. Avoid blankets or other loose bedding in the crib and instead use a sleep sack to keep a baby at a comfortable temperature. But keep in mind that weighted sleep sacks should be avoided. “We don’t want to be putting any kind of weight on a baby when they’re going to sleep,” says Strong.

Breastfeeding a baby can reduce the risk of SIDS. Research shows the longer a baby is exclusively breastfed without supplementing their diet with formula or solid food, the more their risk of SIDS decreases.

While a parent should avoid bed sharing, sharing a room with a baby is encouraged. The baby should be kept close to your bed for ideally the first year of their life, but at least for the first six months. In addition to reducing the risk of SIDS, room sharing can reduce the risk of strangulation, suffocation, and entrapment.

The ABCs of safe sleep stand for Alone, Back, Crib. Babies should be placed in their sleeping area alone without toys, blankets, or pillows.

“When it comes to child sleep and safety, boring is best,” says Strong. “You don’t need a lot to get a baby to sleep.”

A baby should also be placed on their back in a safe crib or bassinet. The crib should have a firm, flat mattress and fitted sheet only.

Offering a pacifier to your baby can also reduce the risk of SIDS. However, if you’re breastfeeding, you should wait until a breastfeeding routine is well established, usually around three to four weeks of age. You should also avoid forcing your baby to take a pacifier if he or she refuses.

Ensuring your sleep accessories are safe

Familiarize yourself with federal standards when it comes to cribs, bassinets, and other infant sleep areas. For instance, you should check that they meet the standards of the Consumer Product Safety Commission.

Summa also notes to be careful when using hand-me-down cribs and bassinets, noting that federal crib standards changed more than a decade ago. “The big change that happened in 2011 is we got rid of the drop side cribs,” says Summa. “So if it has a drop side, it’s older than 2011,” she says.

Likewise, you should make sure your bassinet meets federal safety standards. In 2022, Congress also passed the Safe Sleep for Babies Act which prohibits the sale, manufacture, and distribution of crib bumpers and inclined sleepers for infants.

In regards to other sleep accessories, the American Academy of Pediatrics recommends that a baby’s sleep space be clear of:

Is it safe to let my baby nap in a car seat, stroller or swing?

While it is common for a baby to doze off in a car seat, babies really shouldn’t be sleeping in any inclined position. If your baby does fall asleep in a car seat, stroller, or swing, you should move them to a firm, flat surface for the remainder of their sleep session.

Things to do before birth to protect your baby

Early, routine prenatal care can reduce the risk of SIDS. Frequent medical appointments and screenings can help prevent abnormalities that may put your baby at increased risk. During pregnancy, you should also maintain a healthy diet and avoid nicotine, alcohol, or illicit drugs.

When to call a doctor

If you notice your baby is struggling to breathe or seems to be in distress, you should contact a doctor immediately. If you have general questions about the health and safety of your baby, you can contact your pediatrician and consult with trusted resources.

While the causes of SIDS are not fully understood, there seem to be several factors at play. A biological condition combined with a trigger event, such as an unsafe sleeping environment during a critical development period in a baby’s life can lead to SIDS.

To guard against this risk, it’s important to get early and routine prenatal care, engage in safe sleep practices, and follow the tips and tricks outlined here. If you have further questions or concerns about your baby’s health, contact a pediatrician for additional guidance and recommendations.