Welcome to the caffeine nap, a new way to banish the afternoon circadian slump and boost energy for hours afterward. Trendy as it is, this unique type of nap isn’t just a fad. Recent studies show that the combination of caffeine and a nap can make each more effective, and help you wake up from a quick doze alert and ready to go.

A stimulant chemical found in more than sixty types of plants.

What Is a Caffeine Nap?

A caffeine nap — also known as a stimulant nap, coffee nap, or Red Bull nap — refers to drinking coffee just before taking a brief “power” nap. A power nap is usually defined as a short period of rest with the objective of improving alertness or physical endurance. These types of naps range from ten to thirty minutes long.

Shorter naps of no more than thirty minutes are long enough to reduce feelings of sleepiness, but too brief to enter N3 sleep, the deepest and most restorative stage of sleep. Waking from N3 can cause prolonged sleep inertia, a state of grogginess and decreased motor ability caused by lack of blood flow to the brain during sleep. (1)

How Does a Caffeine Nap Work?

As the body burns fuel over the course of a day, adenosine accumulates in certain parts of the brain. (3) This accumulation signals the body to sleep and restore its energy reserves. Even a very brief nap can dissipate some accumulated adenosine, restoring alertness and boosting energy for several hours. 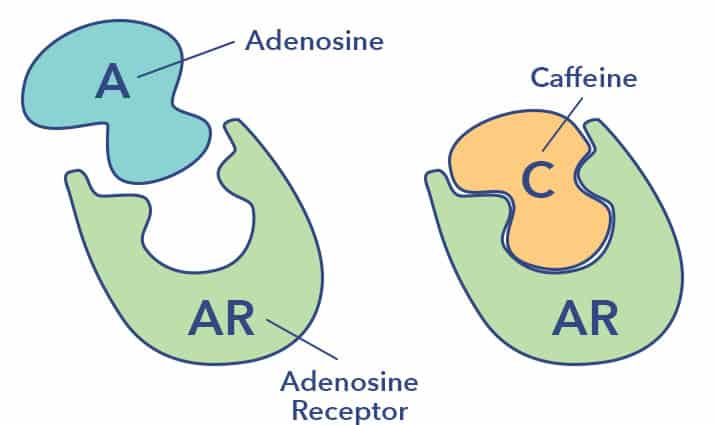 While a nap helps to reduce levels of adenosine, caffeine competes with adenosine for certain receptors in the brain. This can prevent or delay the feeling of sleepiness typically associated with rising adenosine levels. (4) Because caffeine causes levels of adenosine to build up in the bloodstream, regular use can cause morning grogginess and other similar effects. This can increase the need for caffeine to feel awake, even in the morning after a full night’s sleep.

Numerous studies demonstrate the power of a caffeine nap to improve energy and cognitive function. A recent Japanese study found that people who took a caffeine nap before a series of memory tests performed better than volunteers who took a nap only, or took a nap and either washed their faces or were exposed to bright light. The volunteers also rated themselves as less fatigued. (5) In another study, subjects who took caffeine naps performed better on cognitive tests for longer periods of time without the need for additional sleep. (6)

Q: Where does coffee come from? A: Coffee is a brewed drink made from the roasted seeds of berries from certain trees of the Coffea species. The trees are native to Africa, but are now cultivated all over the world.

Health Benefits — and Risks — of Naps and Caffeine

Scientific opinion about naps and caffeine has varied over the last several decades. Both were once considered unhealthy, or at least unnecessary, but recent studies have revealed that naps and caffeine may have many more health benefits than drawbacks.

Current research on the physical and cognitive effects of napping shows significant benefits for those who have the time to sleep during the day. Naps increase alertness, significantly reduce daytime sleepiness, boost energy and mood, and improve mental functioning. (7)

Though brief, a twenty to thirty minute power nap can be enough to restore cognitive function and dissipate the sleep drive, the desire to sleep that builds gradually over the course of the day. The sleep drive usually peaks in the early to mid-afternoon, and again later at night.

Because the process of memory consolidation begins during the second stage of sleep approximately five minutes after sleep begins, a power nap can also boost memory and help facilitate learning. (9) Just twenty minutes of sleep can reverse the impact of poor sleep on metabolism and hormone function, allowing fat storage and other essential processes to return to normal.

Though risks of naps are few, they do have one significant drawback: they can reduce the sleep drive, disrupting or delaying sleep at night. For this reason, sleep specialists typically recommend that people struggling with insomnia forego naps of any duration.

Caffeine is the most commonly consumed psychoactive substance in the world. Studies show that its ability to block adenosine receptors leads to increased firing of other neurons related to concentration, memory, reaction time, mood, and energy levels.  The primary benefit of caffeine is an often significant reduction in sleepiness and fatigue. (10) Its stimulating effects can also counteract some of the detrimental impacts of night shift work on the sleep-wake cycle.

Caffeine can improve coordination and physical performance, and may increase the body’s efficiency when consumed before exercise. (11)  Caffeine may also contribute to weight loss by raising body temperature and breaking down fat.

Caffeine is generally recognized as safe, but  does have some risks, particularly for those sensitive to its effects. These include:

Caffeine is fatal in very high doses, approximately the equivalent of eighty to one hundred cups of coffee. Caffeine powder and supplements contain significantly more caffeine than coffee or other beverages, and are more likely to cause injury or death. The FDA recommends consuming no more than 400 milligrams of caffeine a day, or about four to five cups of coffee.

How to Take a Caffeine Nap 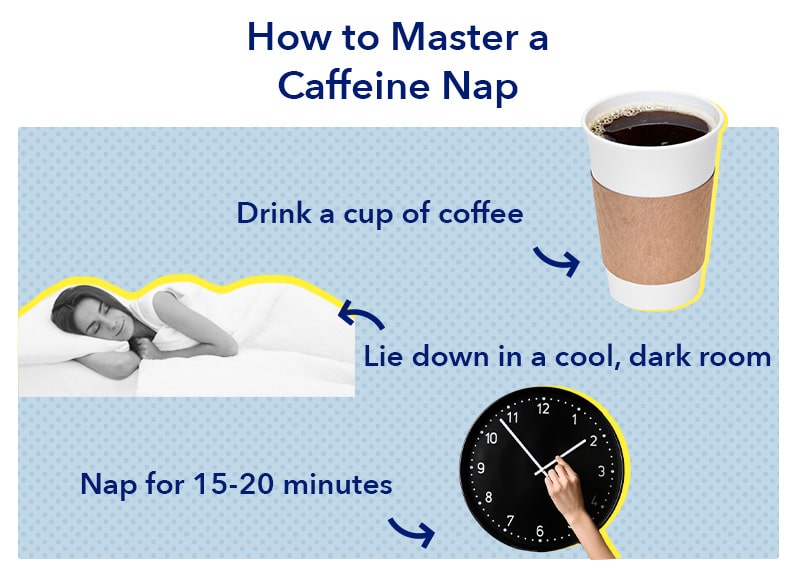 To take a caffeine nap:

Naps and coffee have always been popular ways to ward off daytime sleepiness and sharpen cognitive function. The caffeine nap, one of the latest trends in sleep, utilizes the power of both. Studies show that those with time to nap and for whom caffeine is effective can compound their effects by consuming caffeine just before a quick slumber. Requiring only a cup of coffee and ten to twenty minutes to sleep, the caffeine nap can provide hours of alertness and energy.