How The Moon Cycles Affect Sleep 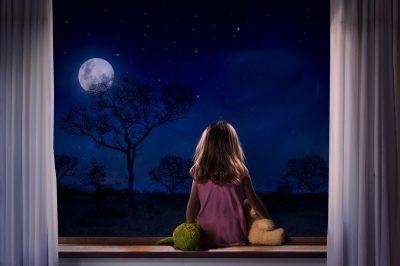 When there’s a full moon in the night sky, people are ready to blame everything on the moonlight. In fact, we can find evidence of people blaming human behavior on the moon as far back as the first century AD when Pliny the Elder suggested that the full moon triggered madness by way of heavy nocturnal dew. A couple of centuries (and a lot of science later), we know better. Today, there’s plenty of evidence to suggest a real connection between the moon cycle and sleep.

What Is Lunar Insomnia?

Lunar insomnia is marked by the moon having a negative impact on your ability to sleep. If you find yourself wired instead of tired come bedtime during a full moon, that could be considered lunar insomnia. Often, people who think they’re impacted by lunar insomnia might feel the effects a few days before or after the full moon, too. There’s still a lot to learn about the moon’s impact on our sleep cycles, but the best way to combat the occasional difficulty falling asleep is practicing good sleep hygiene.

Does A Full Moon Cause Restless Sleep?

We don’t have to look too hard to find folks who blame a restless night on the full moon, but for far too long, the evidence was largely anecdotal.

However, in 2013, a breakthrough study gave some much-needed credence to the phenomenon. In the first study to provide actual data connecting poor sleep and full moons, biologist Christian Cajochen and his team of researchers at the University of Basel in Switzerland found that people could expect disruptions in their sleep in the days leading up to a full moon and a few days after. Specifically, the researchers found that people:

Researchers noted that the changes were associated with a decrease in subjective sleep quality and diminished endogenous melatonin levels.

How The Moon Cycles Affect Sleep

Cajochen and his team were the first to provide “reliable evidence that a lunar rhythm can modulate sleep structure in humans.” Since then, plenty of studies have gone on to show the same.

In 2021, a partnership between scientists at the University of Washington, the National University of Quilmes in Argentina and Yale University found that sleep cycles fluctuate during the 29.5-day lunar cycle. Specifically, the study showed that in the days leading up to a full moon, people went to sleep later in the evening and slept for shorter periods of time.

What made this study so interesting is that researchers saw the same ebb and flow in people’s sleep cycles across a range of settings — from Indigenous communities in northern Argentina to college students in Seattle. Moreover, the fluctuations occurred regardless of the community’s access to electricity.

As a result, researchers ultimately concluded that “moonlight likely stimulated nocturnal activity and inhibited sleep in preindustrial communities and that access to artificial light may emulate the ancestral effect of early-night moonlight.”

In yet another study, researchers found that during a full moon, total sleep time decreases by 25 minutes while rapid eye movement (REM) sleep latency (the amount of time it takes to fall asleep) increased by as much as 30 minutes around a new moon (that’s basically the opposite of the full moon, meaning no moonlight to mess with your sleep habits).

The TLDR: if you think the moon tinkers with your forty winks — you’re right, and there’s plenty of science to back it up.

What Moon Phases Make You Tired?

Regarding the moon cycle and sleep, experiences seem to vary. Some people may only feel tired during a full moon, while others may find that lethargy and restless nights occur across various moon phases.

What we know for sure is that the moon cycle can cause melatonin disruptions in humans, which is thought to be caused by the light the moon gives off. Our circadian rhythm cues us to go to sleep based on light signals, or really, a lack thereof around bedtime — this is a big part of the reason we’re often advised to stay off our electronics around the time we want to go to bed.

So it isn’t surprising that strong moonlight might make it more difficult for us to fall asleep and that a full moon, and the phases leading up to it, likely give us the most trouble come bedtime.

How The Moon Cycle Affects Men And Women Differently

In the never-ending battle of the sexes, you’re probably wondering if the moon phases affect you or your partner more deeply; it looks like science has an answer for that too. We’re not quite sure who to apologize to here, but it seems that the lunar cycle has a more powerful effect on men’s sleeping patterns than women’s.

Researchers found that men had lower sleep efficiency and were awake longer during the waxing phase of the moon versus the waning phase, and women experienced no changes in sleep efficiency or duration of wakefulness in either.

While more research is needed to determine why lunar phases affect men more, researchers suspect that the sunlight reflected by the moon at bedtime may account for the change, and the male brain could simply be more sensitive to ambient light than the female brain.

People blame full moons for everything from crazy behavior to an increase in emergency room visits, but any evidence of the moon affecting sleep was largely anecdotal. However, over the last decade or so, multiple studies have shown that lunar activity has a discernible effect on sleep. More specifically, full moons have been shown to decrease sleep efficiency, delay sleep onset, and shorten its duration.