Do all animals sleep? Does a dolphin need to catch a quick cat nap before swimming laps? Is it true that horses can sleep standing up? And what about opossums and bats… can they really doze upside-down?

The long and short of it is that scientists aren’t entirely sure. In truth, we don’t actually know how many types of animals there are in the world, let alone how all of them sleep. Though experts believe there are between 1 to 2 million species of animals on earth, some say that upwards of 86% of land species and 91% of all sea species have yet to be discovered.

FAQ: Should My Pet Sleep In Bed With Me? 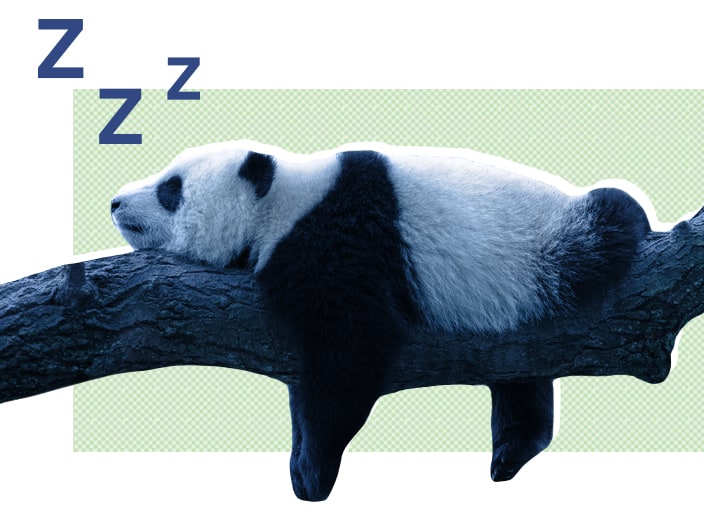 So… We Have No Idea if Non-Human Animals Sleep?

Well, not exactly. According to the National Sleep Foundation, several species of animals slumber in much the same way humans do, though their sleep patterns and habits are as diverse as the creatures themselves.

Scientists have found that one type of animal may go through totally different stages of sleep than another. Insects and fish, for example, never experience REM sleep, though most birds and all mammals do every night. Additionally, the amount of time these critters snooze can vary wildly. While sea otters and parrots need up to 11 hours of shut eye to feel well-rested, blue whales can get by just fine with two, and giraffes are able to get all the energy they need from a single, 30-minute nap.

Compelling stuff, right? To learn more about how the various members of the Animal Kingdom catch their respective Zzz’s, take a peek at our infographic below. It’s chock-full of tantalizing facts, weird tidbits, and surprising stats that should shed some light on the species-unifying subject of sleep. 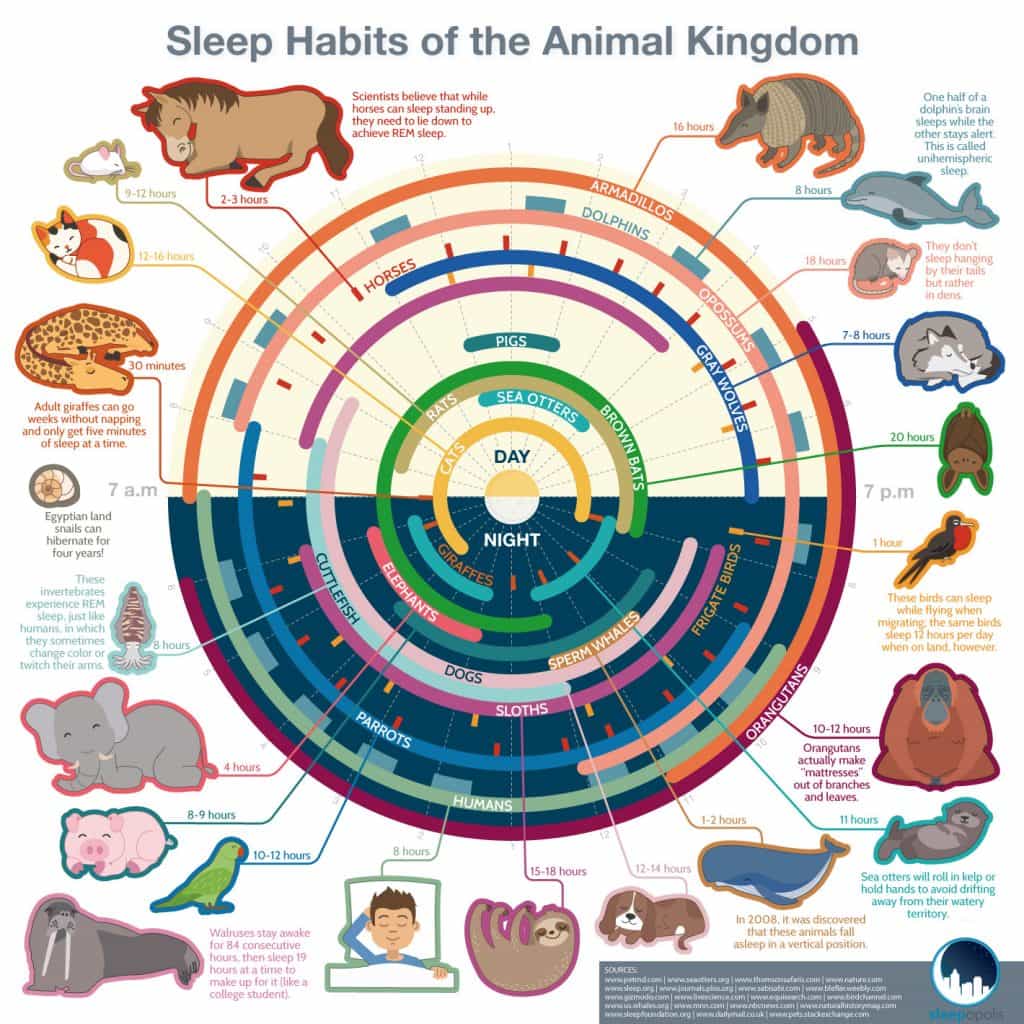 As you can see, we have a lot more in common with our animal brethren than you might at first think. While a pig may not have the option of cuddling up on one of best memory foam mattresses, they still like to get the same eight hours of sleep that us humans do. And interestingly enough, orangutans have been shown to actually make their own mattresses out of cushiony leaves and twigs, which sounds like a pretty industrious (and cost-effective!) skill to us.

Studying the Sleep Habits of Animals

Though these facts are interesting, and demonstrate a wide breadth of sleep practices across the animal kingdom, the fact remains that there’s much we don’t know. While it’s also difficult to study the sleep habits of humans, scientists can at least monitor human brain activity with relative ease and draw conclusions based on scans and self-reported data. With non-human species, things become a whole lot trickier.

But that doesn’t mean there’s no research on the subject. As a 2008 report pointed out, though there may not be consensus on why animals sleep, there’s no reason to deny the fact that it’s an essential component of every healthy organism’s life. (1) A 2017 review expanded on this notion, detailing the many studies that have since used optogenetics and chemogenetics to study animal brain behavior. (2) These modern methods target specific brain circuits to influence cell activity, either with light (optogenetics) or via a process in which larger molecules can be encouraged to interact with previously unrecognized smaller ones (chemogenetics). According to the review, both methods have broadened understanding of the neural mechanisms of sleep at play in non-human animals.

Ultimately, while there may not be a ton of answers out there, that doesn’t mean the topic’s not worth exploring. In fact, the mystery makes it all the more ripe for research, though we’re pretty sure all human or non-human animal sleep woes could be cured with a fantastic pillow.