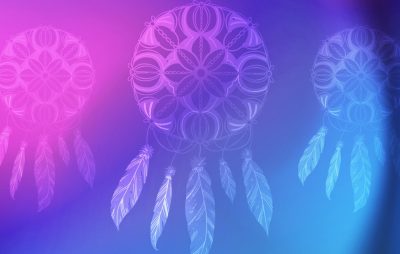 According to an old Ojibway legend, a grandmother named Nokomis watched for days as a spider spun her web near the space where she slept. When her grandchild attempted to kill it, Nokomis stopped the child from doing so and saved the spider. To thank the woman for sparing her life, the spider spun and gifted her a magical web known as a dream catcher. Nokomis was instructed to hang the dream catcher over her bed, and there it remained, working its magic. Each night as the woman slept, the dream catcher caught her bad dreams in its net and let the good dreams pass through.

Today the idea of dream-catching is alive and well. According to Tsar, a Native American and founder of Golden Light Healing Crystals, “They are believed to be powerful objects that can help protect people from nightmares, providing a spiritual connection between the physical and spiritual world.”

If you’re considering a dream catcher for your home, here’s a closer look at its origins, its meaning, and how it works.

The Origins Of Dream Catching

Among the Ojibwe lore, the spider in our opening story was known as Asibikaashi, or ‘the spider woman,” and she was the spiritual protector of the Ojibwe. A strong maternal figure, Asibikaashi was especially protective of babies and young children. But as the Ojibwe flourished and migrated west, it became increasingly difficult for Asibikaashi to protect her people. So, she created the dream catcher as a means of protection by proxy.

Since its creation, generations of mothers and grandmothers have carried on the tradition of dream-catching by hanging these talismans near their little sleepers to protect them from bad dreams, nightmares, and evil spirits.

What Are Dream Catchers?

Tsar explains that “the circular shape of the dream catcher is said to symbolize unity and strength, while the web of sinews represents openness and connection to the spiritual realm. Feathers are believed to attract good dreams, while particular crystals, beads, or other sacred items are used as symbols of guidance or protection.”

Digging a little deeper, we find that each part of the dream catcher has a specific meaning and purpose.

Hoop – The circular shape of the dreamcatcher symbolizes unity and strength.

Web  – Often crafted in a pattern that resembles a spider’s web, the web is meant to catch bad dreams. Typically, the threads of the dream catcher connect to the hoop in eight points, mimicking the eight legs of a spider.

Feathers – The feathers of the dreamcatcher act as a ladder that allows the good dreams to reach the sleeper and comfort them.

Beads – You might see some dream catchers with a single bead and some with multiple beads. A single represents the spider that spun the web, and multiple beads typically represent the bad dreams that have been caught.

While gemstones and arrowheads are more recent additions, it is believed that gemstones function much like feathers by providing an assist for good dreams to reach the sleeper, while arrowheads are intended for increased strength and more protection for the sleeper. Tsar notes that “smoky quartz and tourmaline are both highly protective stones that are used on dream catchers.”

How Do Dream Catchers Catch Dreams?

More specifically, beautiful dreams pass through the threads of the dream catcher by sliding down the feathers to reach the sleeper, and bad dreams are trapped in the web overnight and burned by the daylight.

Where Should Dream Catchers Be Placed?

Dream catchers are typically hung over cribs and kids’ beds to catch any harm or evil that may be around them. For adults, dream catchers could be placed anywhere near their beds.

While dream catchers have their origins in Native American lore, they have made plenty of appearances in pop culture. Notably among them

Typically used for decorative purposes in homes, dream catchers have become quite popular over the years. However, these protective talismans have their origins in Native American culture, specifically the Ojibwe. With hoops made of willow bark and feather and gemstone adornments, dream catchers are thought to have been gifted to the Ojibwe by Asibikaashi, or ‘the spider woman,’ as a form of protection by proxy. Dream catchers continue to capture our attention, and one needn’t look far to find them in modern movies, books, TV shows, and games.