Written In The Stars: The Story Of Andromeda The Constellation 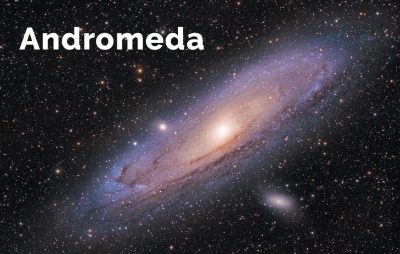 Only a couple billion light years away, the Andromeda galaxy is the closest one to our own Milky Way. It’s one of only a handful of galaxies that can be seen with the naked eye from earth. For stargazers everywhere, the Andromeda constellation is pretty intriguing. It’s named after a mythical mortal princess who was saved from a Kraken by her prince and placed among the stars after her death by the goddess Athena. The myth of Andromeda is a story for the ages and one that lives on in the cosmos and pop culture.

Named after the mythical princess, the Andromeda constellation contains the Andromeda Galaxy, the nearest galaxy to our own Milky Way.

Also known as the Chained Woman, Persea (wife of Perseus), or Cepheis (daughter of Cepheus), Andromeda is the 19th largest constellation in the sky, occupying an area of 722 square degrees. The constellation is considered medium-sized and is approximately 2.5 million light-years away from Earth. That may sound, well, like it’s light-years away, but Andromeda is so close and bright that it’s one of only ten galaxies that can be seen from Earth with the naked eye.

On top of being so close and bright, the Andromeda galaxy hosts roughly one trillion stars. For comparison, our galaxy, the Milky Way, is estimated to host roughly 250 billion stars. Of its one trillion stars, Andromeda has 16 stars visible in the northern sky. Nine are named stars, and the following four are considered major stars:

Fun fact: Alpheratz, or Alpha Andromedae, is one of the most prominent stars in the Andromeda galaxy. The star is 200 times more luminous than the sun and burns significantly hotter (Alpheratz burns at 13,800 Kelvin, while the sun burns at 6000 Kelvin).

The Cassiopeia constellation points directly at Andromeda. If you’re looking at the Northern Sky, you’ll find Andromeda between Cassiopeia’s W-shaped asterism and the Great Square of Pegasus. 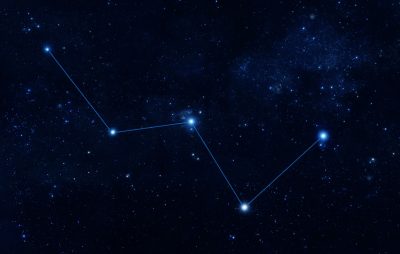 In ancient Greek mythology, Andromeda was the beautiful daughter of king Cepheus and queen Cassiopeia. Like many stories from Greek mythology, the story of Andromeda (and Perseus) is one filled with betrayal, monsters, sacrifice, and of course, true love.

Andromeda was the beautiful daughter of King Cepheus and Queen Cassiopeia. Legend has it that Cassiopeia regularly sang the praises of her daughter’s beauty to anyone who would listen. But one day, Cassiopeia went too far and declared that Andromeda was even more beautiful than the Nereid sea nymphs — protectors of the sea’s bounty, known for their unsurpassed beauty. Once Poseidon caught the wave of Cassiopeia’s blasphemy, he decided that this act of hubris could not go unpunished, so he released the Kraken. His pet sea monster Cetus was sent to destroy Cepheus’ kingdom.

To appease the god of the sea and to save their kingdom and people, King Cepheus and Queen Cassiopeia agreed to sacrifice Andromeda. Cepheus and Cassiopeia may have been a good king and queen, but good parents they were not; they chained their daughter to a rock by the sea so that Cetus could get her easily. 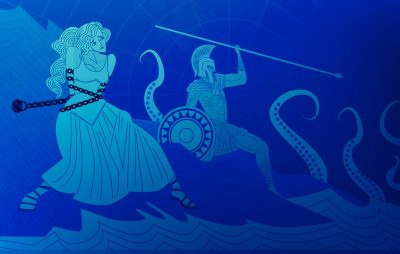 But it was Andromeda’s lucky day; the hero Perseus just happened to be flying by on his winged horse Pegasus with Medusa’s head in tow. The charming prince fell in love with Andromeda at first sight.

Now, the details get a little sketchy here. Some retellings indicate that Perseus slayed the monster with his sword, while others indicate that he turned Cetus to stone by flashing Medusa’s head at him. Either way, Perseus killed the sea monster and married his true love.

Perseus and Andromeda had seven sons and two daughters, and the pair lived happily ever after.

Professor Karen Carr (Emerita) of Portland State University says, “The story goes back at least to the 500s BC. There are many variants (sometimes Perseus kills the sea monster with his magic sword or by throwing rocks, for example).” She goes on to tell Sleepopolis that the story of Perseus and Andromeda is “probably the story behind all our more recent fairy tales where the prince kills the monster to save the princess.” So if you liked Sleeping Beauty, The Princess Bride, or any other movies with a similar trope, you might just have Andromeda to thank!

How Did Andromeda Become A Constellation?

Is Andromeda A Zombie Galaxy?

Essentially, a zombie galaxy is one that has run out of cosmic food, so to speak. Usually, that food source is a fresh supply of hydrogen gas from the cosmos. Ultimately, when galaxies run out of the “fuel” they need, they begin to die off, and their star formations fade over billions of years.

Astrophysicist Kevin Schawinski at ETH Zurich told The New Scientist, “They’re already dead, but they don’t know it yet, so they keep going, and our nearest neighbor galaxy, Andromeda, is probably a zombie.”

Like many stories from Greek mythology, The story of Andromeda lives on in today’s pop culture.

The character has appeared in modern adaptations of the myth, including in the 2010 movie Clash of the Titans.

Greek mythology is teeming with hundreds of wonderful stories, and the story of Andromeda is undoubtedly one of them. Sacrificed by her parents to appease Poseidon, Andromeda was rescued by Perseus, and the pair married and lived happily ever after. Today, Andromeda lives on in the cosmos — if you ever want to see her, just look up!