We have affiliate relationships where we are paid a commission on sales through some of our links. See our disclosures.

If you’re reading this, it’s probably because you don’t know the difference between a duvet and a comforter. Which one is fluffier? Which one is easier to clean? Are they even really that different? Well, you’ve come to the right place, because Sleepopolis is here to fill you in on everything you need to know about these two bedding essentials, and help you find out which is best for you.

Now, some of you may have already read our Casper mattress review as well as our review of the Casper pillow but, for this demonstration, I’ll be using Casper’s Humidity Fighting Duvet and Weightless Duvet Cover. This way, you can get an up-close look at the differences (and similarities) of comforters and duvets. Okay, let’s get into it!

What’s The Difference Between a Comforter and a Duvet?

Let me start by saying that if you’ve ever confused a duvet for a comforter, I promise you’re not alone. They actually have a lot in common! Both duvets and comforters:

In addition to these commonalities, there are some less noticeable differences that can vary from product to product:

Q: What does fill power mean? A: “Fill power” refers to the measure of the loft of a down or down alternative product. The greater the fill power, the more insulating and fluffy the product will be!

Now, remember folks: the differences listed above do vary among bedding brands, so don’t be surprised if you find some exceptions to those rules. But there is one constant, key way to tell the difference between a duvet a comforter — a duvet is designed to go inside a duvet cover, and a comforter is just one piece of bedding that’s ready to go right out of the bag.

Seems like a pretty easy way to identify which is which, right? Well, just because you can spot the difference between the two doesn’t necessarily mean you know which one is best suited to your sleep needs. That said, let’s dive deeper into the details of what makes each accessory special (and what might be a dealbreaker!).

Duvets VS Comforters: Which One Should I Buy?

Both duvets and comforters come with their own unique set of perks, as well as some potential pitfalls. So, let’s compare them side by side so you can decide which one is the best fit for you.

Essentially, the duvet is the insert that goes into the duvet cover, and the cover is like a pillowcase for your duvet.

Now, the practical purpose of the cover is that it protects your duvet, keeping it clean, pristine, and safely tucked away. But let’s take a closer look at all the advantages that come with using a duvet:

Q: Should a duvet be smaller than a comforter? A: Typically, comforters are larger than duvets, offering more hangover on your mattress. Meanwhile, duvets are usually much fluffier!

Okay, so we know that duvets are easy to clean, allow sleepers to frequently switch up bedroom decor, and make a great substitute for a top sheet… But what’s not to love about a duvet? Well, in my opinion, there is one main downfall of the duvet:

Now that we’ve taken a close look at the ins and outs of the duvet, let’s see how the comforter compares.

The comforter is one piece of bedding that’s ready to use right out of the packaging, no cover required.

But even though comforters don’t come with covers, they are decorative in their own right, and come with some unique advantages:

Q: Will a duvet cover fit over a comforter? A: While duvet covers are technically designed to complement duvets, there is no rule against covering your comforter with a duvet cover! The cover serves as a protective layer for your bedding; just make sure it fits snugly.

Now, before you decide that the comforter is the best choice for you, let’s talk about wash care. When it comes to comforters, I think the primary pitfall is that they are harder to clean:

Anything Else I Should Know? 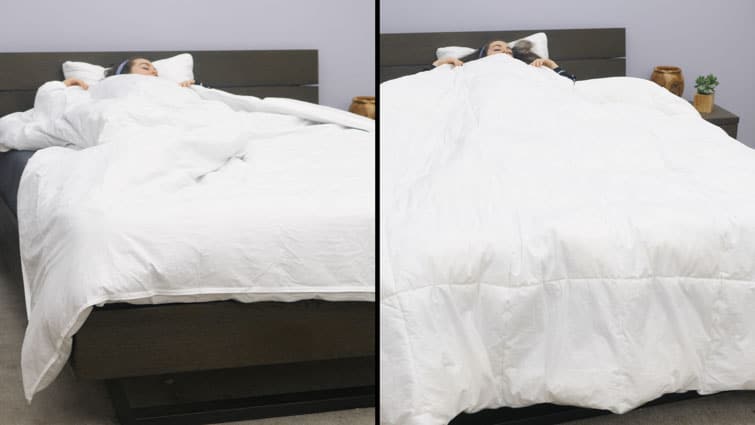 Now that we’ve taken a look at the differences between comforters and duvets, you might now be wondering, “What about price? Which one is more durable? Which is more popular?” Well, the simple answer is that everything varies from brand to brand. That said, there are a few generalities that might help guide you in your search:

Well, there you have it, sleepers. Now you know all about the differences between duvets and comforters, and you’re fully equipped to decide which is the right fit for you. But remember: most bedding brands do offer trial periods, so if you want to test either of these sleep accessories before you commit, you probably can! In the meantime, allow this Sleepopolis review to be your guide.