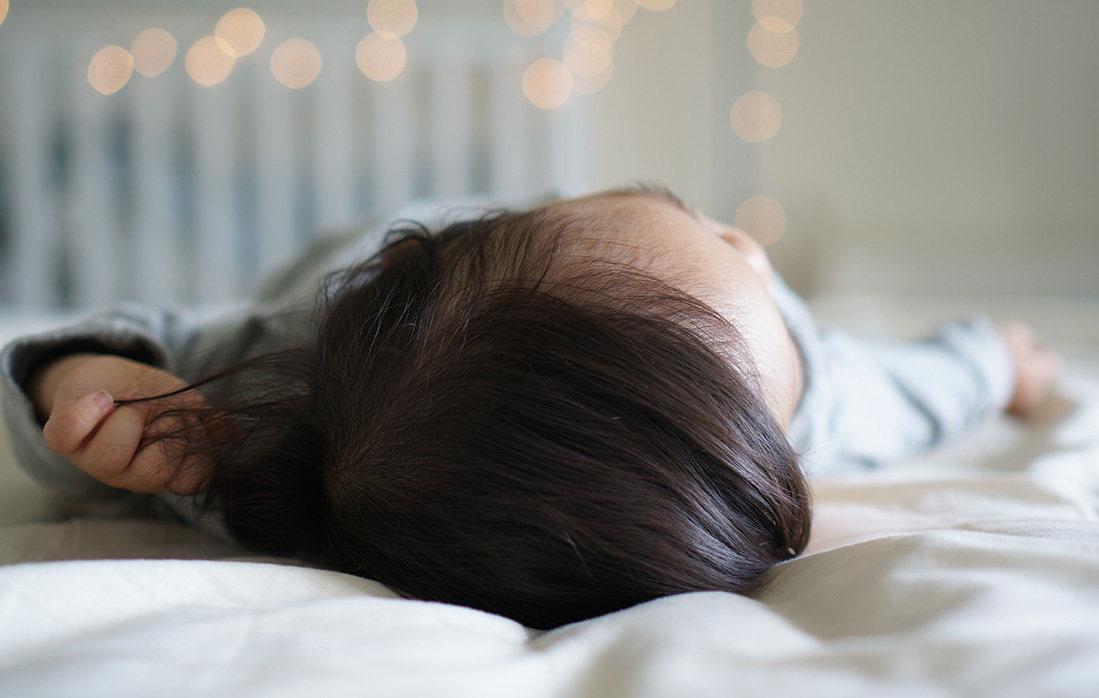 The latest viral hack for getting babies to sleep through the night has hit the internet courtesy of TikTok user ashketchum910. And with over 2 million views, parents everywhere are chuffed with the idea that sleeping through the night is finally back on the table. But while Ash has introduced the sleep hack to another generation of parents, the truth is it’s not as avant-garde as it seems.

What is Le Pause?

In the video, Ash explains the concept of “Le Pause,” and it all boils down to this: Not every sound your baby makes means something, and parents don’t need to react (or overreact) when their babies make noise. According to Ash, parents don’t need to rush to their child’s side to comfort them and pick them up. Instead, he says, “You can take a few beats, let them console themselves, and then they get used to it and put themselves to sleep.”

While Ash notes that French parents couldn’t pinpoint why their babies could sleep through the night, he speculates that this practice is so ingrained in French culture that it doesn’t jump out as the tipping point.

Regarding the technique, Dr. Azizi Seixas, Founding Director of the Media and Innovation Laboratory and Associate Director for the Center for Translational Sleep and Circadian Science at the University of Miami, says, “Le Pause is a technique used to help your child adjust to normal sleep pattern behaviors […] it gives both child and parent space to learn how and when to intervene if the child wakes up from a sleep/nap.”

Dr. Seixas goes on to tell Sleepopolis that, “this approach helps parents not to hover excessively and try to fix everything right away to help their child sleep. Sleep is so personal and idiosyncratic that there needs to be a ‘time experimentation’ on the part of the baby and parent.”

Le Pause Is Nothing New

Not only is this hack commonplace for most French parents, but author Pamela Druckerman first shared the idea with the masses and first coined the term “La Pause” in her book Bringing Up Bebe, published in 2012.

Shortly after the birth of her first child (who she affectionately refers to in the book as “Bean”), Druckerman noticed that the native French moms in her circle regularly spoke of their two-month-old babies sleeping through the night (something they referred to as “doing their nights”). Not only was it completely normal for them — it was expected. One mom in the circle was exasperated that her baby took longer to “do his nights.” He was four months old, but according to his mom, it was “Very late, very late!”

Baffled that French babies were sleeping through the night as early as two months old, Druckerman had to travel back to her native New York to find real answers.

While visiting her old Tribeca neighborhood, Druckerman spoke to Dr. Michael Cohen, a French transplant living in America, to explain the phenomenon. In the book, Cohen says, “My first intervention is to say when your baby is born, just don’t jump on your kid at night. Give your baby a chance to self-soothe, don’t automatically respond, even from birth.”

Druckerman writes, “One reason for pausing is that young babies make a lot of movements and noise while they’re sleeping. This is normal and fine. If parents rush in and pick the baby up every time he makes a peep, they’ll sometimes wake him up.”

Druckerman, of course, clarifies that persistent requests should be attended to, but if parents always pounce at the first heavy sigh, their babies will never have a chance to learn how to self-soothe.

Cohen also tells Druckerman that the “window for [The Pause] is pretty small; it’s only until the baby is four months old. After that, bad sleep habits are formed” — a critical piece of the puzzle she wished she had known sooner. Unfortunately, her “Bean” was nine months old by the time all of this was sorted, so she missed the critical window to try it for herself.

Are La Pause and Crying It Out The Same?

For some parents, Le Pause may sound remarkably like the Cry It Out (CIO) method of sleep training, also known as the Extinction method. You might also be familiar with its cousin, the Ferber method, which is a modified version of the CIO method (it’s sometimes also called graduated extinction method).

However, Leah Alexander, M.D.FAAP, a board-certified pediatrician in New Jersey, assures Sleepopolis that’s not quite the case. “The Le Pause Method is different than the Cry It Out/Ferber method in that it is much gentler and does not involve letting your baby cry for extended periods of time,” says Alexander. “With the Le Pause Method, you will still be present to offer support and reassurance to your baby, but in a way that will not disrupt their natural sleep process.’

Similarly, Dr. Seixas says, “Le Pause just means that parents allow babies to resolve their sleep issues on their own for short periods of time. Cry It Out is an intentional strategy to sleep train your baby.”

Dr. Seixas agrees that the practice is safe but cautions parents to remain vigilant and be sure that their baby’s cries or fussing are not due to something more serious.

Tips To Help Your Baby Sleep Through The Night

Aside from taking a Le Pause and giving your baby a few minutes to sort some things out, or if you missed the four-month window to try it for yourself, Alexander offers some tips for parents to help their babies sleep through the night.

• Try to create a bedtime routine that is calming and relaxing for your baby. This could involve giving them a bath, reading them a story, or singing them a lullaby.
• Establish a regular bedtime and stick to it as much as possible.
• Make sure that your baby’s sleeping environment is quiet, dark, and comfortable.
• Avoid letting your baby become overtired by putting them to bed before they reach the point of exhaustion.
• If your baby wakes up in the middle of the night, try not to engage them in active play or conversation. Instead, offer soothing words and touches to help them fall back asleep.

In response to the hack she wrote about a decade ago resurfacing and going viral, Sleepopolis reached out to Pamela Druckerman for comment, but she did not respond by time of publication.