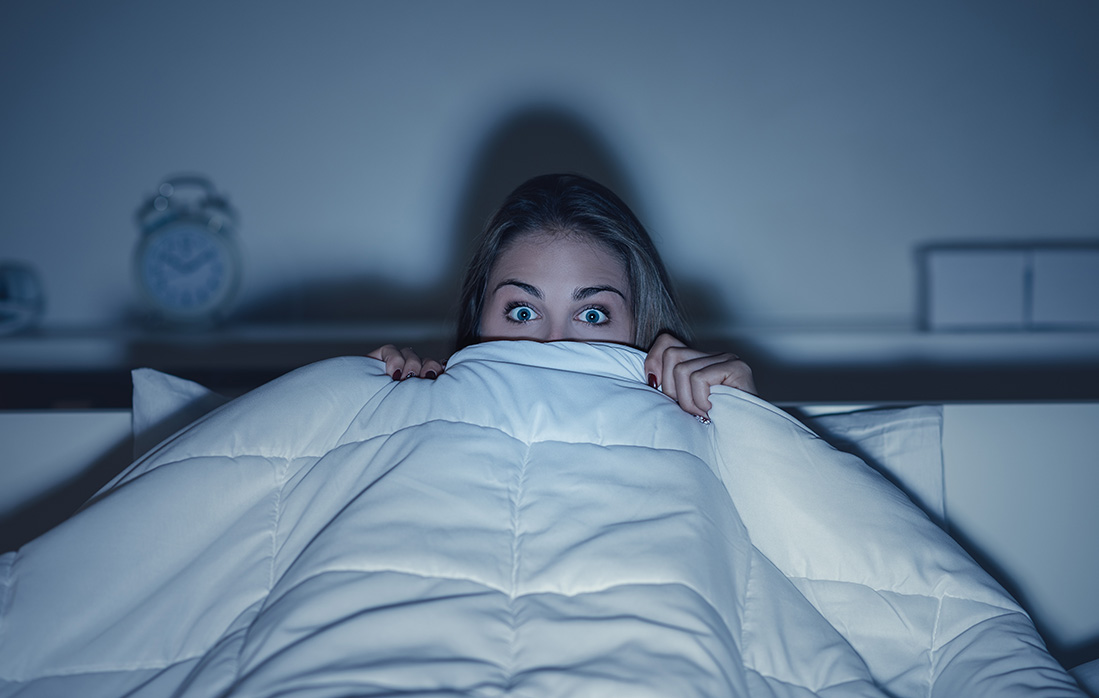 Bedrooms (and the beds in them) are powerfully symbolic. The spaces represent safety, warmth, comfort, and a place to finally rest. These primal, serene feelings and spaces are ripe territory for horror filmmakers to exploit and to unnerve us. Centering suspense and horror around a bed and bedroom is a very scary way for filmmakers to evoke the opposite of what these places are supposed to offer us: danger, exposure, pain, and fatigue. Some movies dig into the psychology surrounding our feelings about our beds and bedrooms, while others just use them as a setting for their most spectacular set pieces. We’ve watched a lot of these horror films and with Halloween around the corner, we have rounded up the six horror movie beds (and bedrooms) you’d never want to sleep in.

The most recent film on this list, former sketch comedian Zach Cregger’s shocker is best seen blind, so we’ll strenuously avoid spoilers. Barbarian hinges on an AirBnB mix-up, with Tess (British actress Georgina Campbell) double-booked in a blighted Detroit neighborhood with Keith (Bill Skarsgård, Pennywise in It) during a downpour. The awkward tension of two strangers negotiating sleeping arrangements is just the beginning, as Tess discovers a hidden basement chamber and a truly horrifying bedroom within. Keith argues that her description “doesn’t sound that weird,” but it most definitely is, and hints at the dark backstory to be revealed. The twists Barbarian takes from Tess’s discovery and Keith’s insistence on checking it out are unpredictable, but Cregger’s fragmented story explores the idea of where it’s safe to sleep from multiple angles.

Veteran Canadian director David Cronenberg returned to his horror roots for what might become his final film, Crimes of the Future. In this future, humans have evolved and mutated in response to their changing environment. For Saul Tenser (Viggo Mortensen), mutation is lucrative and uncomfortable — he’s a renowned performance artist with a side hustle as an undercover informant. Tenser’s body is constantly developing new internal organs, requiring him to use a bizarre biomechanical bed from mutant furniture specialists LifeFormWare that adjusts to his body’s changes in real time. Sounds fancy, but it looks like a desiccated beetle suspended upside-down from the ceiling. The bed monitors Tenser through fleshy tentacles that grip his arms and legs as he sleeps. It seems like an unnerving place to sleep even before Crimes of the Future’s conspiracy plot kicks into high gear and LifeFormWare repairwomen Router and Berst prove the power drills they carry aren’t just for fixing weird beds.

In the first of many sequels to author Clive Barker’s groundbreaking directorial debut, the mattress from the bed where the villainous Julia was killed in Hellraiser becomes the portal for deranged psychiatrist Dr. Channard to bring her back from hell in Hellbound. Julia’s new physical form needs blood, and Channard is happy to sacrifice a few patients to get her some. Julia’s initial resurrection comes in a disturbing sequence involving the mattress, a patient who hallucinates insects crawling all over his skin, and a straight razor. As Channard rejuvenates Julia with more of his patients’ plasma and the pair open an interdimensional path to the domain of the series’ Cenobites, Hellraiser II offers the rare example of when it would be better to let the bedbugs bite.

William Peter Blatty’s 1971 novel The Exorcist literalized parents’ anxieties after the social upheaval of the late ‘60s. As their kids turned into what they saw as only long-haired radicals that they barely recognized, Blatty’s tale of innocent tween Regan MacNeil possessed by a blasphemous, foul-mouthed demon struck a chord. The book was a hit, and director William Friedkin’s adaptation two years later became an Oscar-winning cultural phenomenon. Eleven-year-old Regan (Linda Blair) makes a new imaginary friend named “Captain Howdy,” and soon after, she’s exhibiting strange, violent behavior that leaves doctors baffled. Many of the film’s most infamous horror scenes occur while Regan is in her bed, and by the time her desperate mom Chris (Ellen Burstyn) seeks help from a pair of priests, she’s confined to it. As Friedkin ratchets up the tension and the action centers solely around Regan in bed, the demon that has possessed her unleashes its cruelest and most personal taunts against the beleaguered priests.

Wes Craven gave horror one of its most enduring and iconic villains in Freddy Krueger, the wisecracking killer with the power to torment his victims in their dreams. A Nightmare on Elm Street (1984) established the core theme of the series: kids targeted by Freddy in retribution for their parents’ vigilante justice that left him scarred and burnt. Throughout the franchise, many of Freddy’s dream attacks come while his victims are in their bedrooms in what’s typically the one place teenagers can call their own. Joey Crusel’s seduction by a desirable lady inside his waterbed who turns out to be Freddy in A Nightmare on Elm Street 4: The Dream Master (1988) is typical of the elaborate dream sequences the series turned to in the late ‘80s, but the Nightmare series’ most potent bed-related moment comes in the original film with the death of Glen Lantz (a then-unknown Johnny Depp). No jokes, no dream symbolism, just protagonist Nancy’s boyfriend pulled into a hole in his bed followed by an astounding geyser of blood.

Is Death Bed: The Bed That Eats one of the worst horror movies ever made? Is it secretly a triumph of surrealist filmmaking? Could it be both? That’s for you to decide. Are there better movies on this list? Absolutely. But Death Bed tops our list of the worst beds in horror movies for delivering exactly what the title promises. There’s a bed. It eats people. To death! It also snores, laughs, and has intense mommy issues. Seriously. The bed is essentially the lead character here. Said bed’s powers, which also include telekinesis, are tied by blood to a slumbering demon. The demon awakes once every ten years, and that’s feeding time for the death bed! A bunch of folks wander into the home where the death bed awaits and get themselves eaten. (Famous last words: “At least this bed seems comfortable!”) Sound weird? This artifact of outsider horror is narrated by a guy trapped inside a painting who’s forced to watch the bed devour its victims, so that should clear everything up.

Anthony Bartkewicz is a writer and editor whose work has appeared in SPIN, Vice, Entertainment Weekly, and more. He lives in the Bronx, but sleep is where he's a viking.