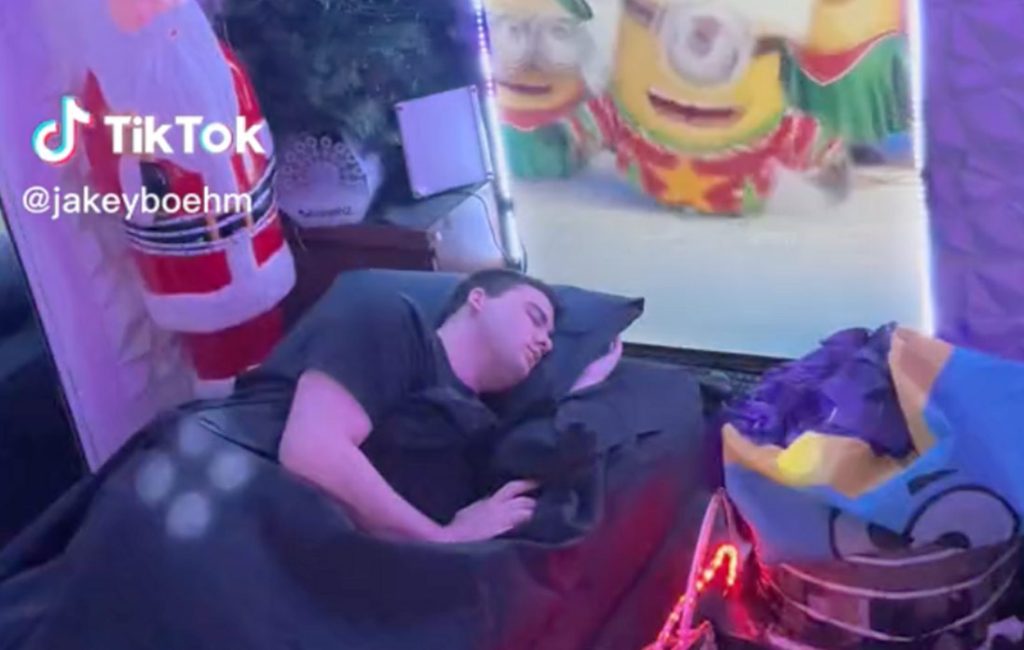 Making money while you sleep may be a pipe dream for some, but for “sleepfluencers,” it’s very real. By live-streaming themselves while they sleep, one influencer has tapped into a source of income most of us can only dream of, while another stumbled into a novel way to boost his following while offering viewers a different kind of community.

Aussie Jakey Boehm tells Sleepopolis that sleep streaming is really nothing new. “For many years, there have been streamers on Twitch who, once a month, let their audience pay to play random sounds to wake them up,” says Boehm. “So the concept isn’t new. I took the idea and brought it to TikTok. And instead of just sounds, I made it possible to turn on lights, trigger bubble machines and smoke machines, and [I even have] a zap bracelet that wakes me. This is something that’s never been done before.”

If you’re wondering how watchers even have the power to wake Boehm up, it looks like the sleepfluencer intentionally makes things interactive by essentially gamifying his sleep streams. Boehm uses a script that scans live chats for certain words. Once watchers use those words in the comments, it triggers noises and other disruptions to wake him up. He also uses the TikTok Gifts function, so when a fan sends him a gift, that too triggers the noises and disruptions.

As Boehm mentioned, watchers can turn the lights on in his room and set off the bubble machine, but to mix it up and keep things fresh and fun (maybe more so for the viewers than for Boehm himself), he has been awakened by Barney’s theme song or the sound of an FBI agent busting through the door.

Duane Olson, another sleepfluencer from Hyde Park, NY, has a slightly different origin story. “I literally started doing this as a joke. I had never heard of sleep streaming before, so it wasn’t like I hopped on the trend. I just did it on the fly one night, and here we are.”

Using a gooseneck phone stand that suspended his phone in front of his face to watch YouTube videos when he couldn’t sleep, Olson said one night he just thought to himself, “What if, just for giggles, I went live on TikTok and just…slept.” The next morning he woke up to more followers, and it wasn’t long before he woke up to 1,000 people watching him at once.

In terms of gamifying his sleep streams, Olson says, “I prefer my method — it’s calming and quiet and peaceful like sleep should be.”

He admits to toying with the idea of adding some interactive elements. But, if he does, he’ll likely limit it to allowing watchers to change his sleep sounds from “white noise to thunder or changing the color of light in the room — something that allows for some interaction but doesn’t turn into a fever dream.”

It’s Not About Quality – or Quantity

Sleep streaming may be fun for the viewers, but according to the sleepfluencers, it’s not exactly peaceful or restorative.

For Olson, “It’s always been a little weird and always will be.” He goes on to tell Sleepopolis that he doesn’t get the best of sleep when he’s streaming. “Merely knowing that thousands of people are watching me just doesn’t allow me to get into the deepest of sleep,” he says. “And sleeping with the light on – something I have to do in order for my audience to be able to see me – detracts a bit from the quality. All in all, it’s not the worst sleep by far, but it’s not my best. But you gotta give the people what they want.”

Olson also notes that he limits his streams to nights when he doesn’t have much going on the next day or when he has the following day off.

As for Boehm’s interactive approach, the constant interruptions allow for very little sleep, but he does his best to find some balance and get some rest during the day. “A sound effect is triggered every 10 to15 seconds, so I am not sleeping at all during the 10-hour daily stream,” says Boehm. “I try to balance my schedule, and I sleep 4 to 5 hours during the day, so I’m generally okay.”

Why Do People Tune In?

Obviously, the motivation to watch someone sleep is complex and varies from person to person.  Dr. Katherine Hall, a sleep psychologist at Somnus Therapy, says that outside of “deeper psychological issues that need to be addressed […] people may be drawn to watch someone sleep out of a sense of curiosity, fascination, or even comfort. Maybe they are drawn to the peacefulness of someone else’s sleep, or maybe they feel connected to them in some way.”

From what the sleepfluencers can tell, it appears that Boehm’s 1 million followers and Olson’s 13,000 seem to get something very real out of the experience.

“The majority of supporters love the concept of controlling my room from the other side of the world; some just like seeing me get mad, and some people say watching me sleep helps them fall asleep,” says Boehm.

Olson says his viewers tune in for two reasons. “Half of my viewers watch for the humor and absurdity of it, and the other half watch because it’s cozy and relaxing. I don’t know for sure, but I feel like a lot of that second half [comprises]  individuals who maybe live alone or have trouble sleeping. And being able to see someone else who’s heading off to sleep at that moment may bring them a little bit of solace. It’s nice.”

Is It Time to Quit Your Day Job?

Along with a blow to both the quality and quantity of their sleep, sleepfluencers are proof that you can make money while you sleep — some more than others, of course.

Admittedly, Olson isn’t quite breaking any records in terms of income from his sleep stream, so he doesn’t usually keep track of it. “Usually, it’s just pennies, but one time I woke up to like 30 bucks. I average about a dollar each night,” he says. “I don’t get a lot of money as of right now – but then again, it’s not a stream geared toward making money.” Olson notes that he may keep a sharper eye on his income if he ends up making his sleep stream more interactive.

For Boehm, on the other hand, sleep streaming is a legit source of income. “At the start, it was very hard to manage live streaming every night and then have to work full-time the next day. For 6 months straight, I streamed 10 hours every night, 7 days a week, with no breaks.”

Boehm took about a month to hit his stride as a sleepfluencer, at which point he left his job as a web developer for what may be the best job description ever. Currently, Boehm is one of the top 50 streamers on TikTok and averaging about $35,000 monthly in income.

As to where they go from here, both sleepfluencers say that as long as the fans keep tuning in and supporting them, they’ll keep on live streaming their sleep. Olson says, “Who knows? People might not always want to watch, but then again, I’m always going to have to sleep. I guess it’s up to me whether or not I hit the button.”