People need to sleep to stay healthy. Not only do humans need to sleep to keep the body healthy, but sleep is also important for learning. It’s easy to know when people are sleeping because they usually stretch out on a mattress and close their eyes. But if you’ve ever looked at fish, you may have noticed that it’s hard to know if and when fish sleep. 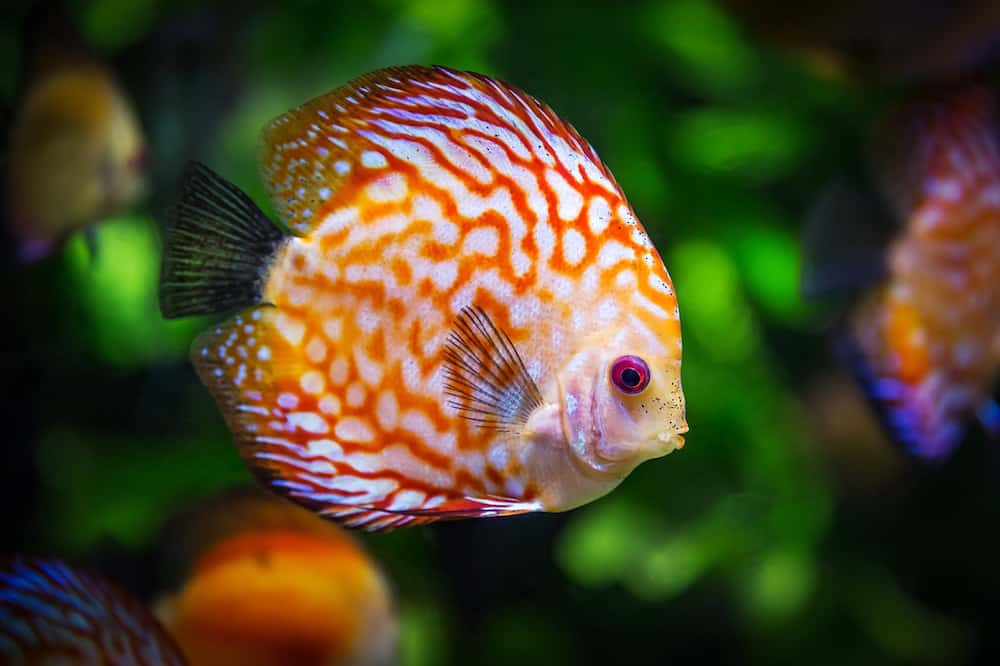 The standard definition of sleep includes closing the eyes and shutting down part of the brain. For humans, it usually also includes lying down. Slowing down or becoming completely inactive is part of sleep. During sleep, waking may be difficult, but it is possible to wake.

Using this definition of sleep for fish is hard because fish don’t have eyelids. Fish also don’t have a neocortex in their brain, which is the part of the brain that shuts down during sleep. But if you watch what fish do, you can see that they do rest: It’s just that their version of sleep is different from ours. When fish sleep, they have a slower heartbeat and they move less. Some types of fish will go into a cave when they sleep, and others will just sink down to the bottom of the water.

How Do Fish Sleep?

Because fish can’t close their eyes, they don’t experience rapid eye movement stages during sleep. They will become less active, but the level of inactivity depends on the species of fish. Most kinds of fish will hover in the water without moving. Even while they are sleeping, though, fish manage to stay alert so they can escape if they’re in danger.

Why Do Fish Sleep?

Fish probably sleep to rest their bodies. Humans sleep for more complicated reasons than fish, though. If humans don’t get enough sleep, it gets hard for us to think straight. The same thing can happen with fish, too. Scientists did an experiment on zebrafish by depriving them of rest time. The next day, the fish were harder to wake, and their mouths and gills moved more slowly. This experiment also showed that fish have slower breathing cycles when they are sleeping, and they take naps, too.

When Do Fish Sleep?

Fish have to look around their environment to stay safe and to find food, so it can be tricky for them to find a time of day when it’s safe to sleep. When fish sleep depends on where they live and the type of fish. For example, fish living near coral reefs usually are active during the day and can hide in the reef at night to stay safe from predators. Surface fish usually stay active during the day and sleep during the nighttime, too. Their eyesight makes it easier to see food during the daytime, and they sleep at night because they can’t see well then.

Sometimes, fish won’t sleep during special times. For instance, if a fish has babies to care for or it’s migrating, it might not sleep. Some types of fish don’t begin sleeping until they are adults: Scientists have found that tilapia don’t sleep until they are about 22 weeks old. Fish that live in aquariums often sleep when the lights go out, just like we do.

Do All Fish Sleep the Same Way?

Different fish species will sleep differently. Sometimes, fish will nestle themselves into the sand. Fish might hide in coral or in caves. Other types of fish might just drift along in the water. And parrot fish will secrete mucous to surround their body to protect them when it’s ready to sleep.

Some types of sharks need to always keep moving in the water so that water passes over their gills to give them oxygen. These sharks don’t seem to sleep much at all.

Mackerel and bluefish are two types of fish that don’t show many signs of sleep. They will be less active at nighttime, but they will still respond if something happens around them, and they keep swimming.

Fish that live in big schools also sleep in an interesting way. Some fish in the school will stand guard while others sleep. Then, the fish switch so the others can sleep.

Scientists are still researching sleep in fish. It’s possible that some fish don’t sleep much because their scenery doesn’t change. This means that they may not need to rest their brain to help them hold onto memories.

How to Tell if Fish Are Sleeping

You can tell that fish are sleeping if they act like they’re sleepy: They don’t really move much, they look really relaxed, and they don’t respond much to what’s around them. A sleeping fish may just seem to be drifting in the water.

How can you tell whether your pet fish is asleep? Goldfish often sleep when it’s dark, and they are more active during the day. Guppies like to sleep when it’s dark, and you can tell a guppy is sleeping because it hovers in one place. Guppies may also float at the surface while they sleep. And bettas float in one place, possibly at the surface or maybe nestled near a plant. Bettas’ gill movement will slow down.

And no, you won’t see a fish sleeping on a mattress!

Logan is the former content director of Sleepopolis. As content director, he reviewed new mattresses every week and curated the comparisons, best of pages, and video guides on the site. Logan perfected his method by personally testing over 200 different mattresses, so he’s not only able to discern the overall vibe of a specific bed, but to contextualize its feel within the bed-in-a-box market as a whole.