Nutrition, exercise, and sleep are three of the most important elements of optimal health. Though our understanding of the body is continually evolving, decades of research have established the importance of healthy habits. The ways we eat, move, and rest strongly influence each other, particularly over the long term. Each choice is interconnected, and contributes either positively or negatively to our overall well-being.

Q: Which is most important, nutrition, exercise, or sleep? A: According to David Earnest, PhD., a professor at Texas A&M who studies circadian rhythms, sleep represents approximtely 60% of the health equation, while nutrition and exercise represent about 30% and 10% respectively.

The body’s circadian rhythm controls not just sleeping and waking, but thirst and hunger, energy consumption, and metabolism. A change in diet or eating habits can cause a shift in how we sleep, and vice versa. Just as heavy meals at night impact sleep, sleep impacts the way our bodies store fat, the kind of food we crave, and how we use energy. (1) 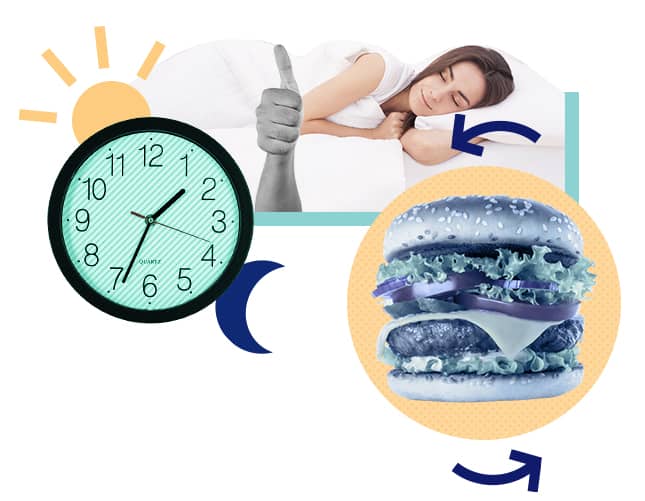 Healthy sleep — seven to nine hours a night for most of us — helps to regulate digestion and appetite. During deep sleep, the release of growth hormone positively impacts the body’s use of glucose, keeping blood sugar at healthy levels. (2) Glucose metabolism rises during rapid eye movement sleep, or REM, the stage of sleep when dreaming occurs and the brain is nearly as active as it is during waking hours.

Whereas sleep promotes a well-functioning metabolism, sleep deprivation triggers the release of stress hormones and proteins that promote inflammation. The release of growth hormone can be impaired or interrupted. These changes, along with activation of the sympathetic nervous system, cause the metabolism to become sluggish and insulin sensitivity to drop. (3) Reduced insulin sensitivity increases fat storage and cravings for “high-energy” foods that raise blood sugar quickly, such as desserts and bread.

Sleep deprivation also affects ghrelin and leptin, the hormones responsible for making us feel hungry and full. Sleep loss causes an increase in the release of ghrelin, also called the hunger hormone, and a decrease in leptin, which reduces appetite. (4) In addition to its influence on hormones, lack of sleep impairs the brain’s ability to make decisions, which can increase the risk of poor food choices. Over time, these combined effects can lead to obesity, diabetes, stroke, and cardiovascular disease.

Leptin regulates appetite, metabolism, and the burning of calories. Leptin is produced during sleep to allow the body to remain asleep without feeling hunger.

The three major macronutrients in food are protein, carbohydrates, and fat. A macronutrient is a type of nutrient required in large amounts in the diet. Though research on food and sleep is often mixed, whole foods appear to promote healthy sleep more than processed or refined foods. Recommended daily amounts of macronutrients may depend on age, health issues, exercise habits, and sleep patterns.

Protein is crucial to many bodily functions, including building and repairing tissues such as muscle. Rich sources of protein include meat, beans, eggs, dairy products, and fish.

A recent study shows that a higher protein diet may be associated with improved sleep in volunteers who lost weight over a period of a month, whereas other studies show that high protein intake in shift workers can cause difficulty staying asleep. (5) Low intake of protein has been associated in some studies with poorer sleep quality. Moderate protein diets such as the Mediterranean Diet may promote better sleep efficiency and less interrupted sleep overall in women, while results are less clear in men. Further studies are needed to determine which diet is best for both sexes, and how much of each macronutrient is best for sleep. 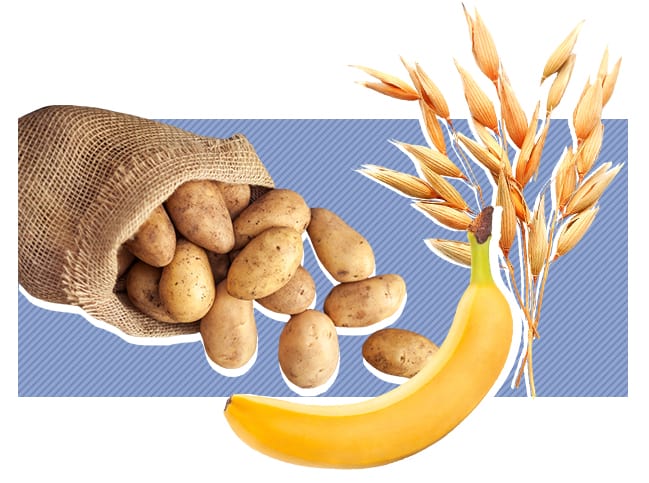 The word “carbohydrates” refers to the starches, sugars, and fibers in foods such as vegetables, fruits, grains, and dairy products. A carbohydrate may be healthy and unrefined, or cause spikes in blood sugar that promote weight gain and diabetes. Examples of unrefined carbohydrates include:

Research on sleep and the intake of refined carbohydrates is contradictory. High intake of sugar and processed foods such as noodles and bread appear to contribute to insomnia in some studies, while others show that consumption of carbohydrates may reduce the time it takes to fall asleep. Consumption of unrefined carbohydrates as part of the Mediterranean diet appeared in one study to help regulate the circadian rhythm, though others show minimal effect. (6) More studies of longer duration are needed to establish which nutrients are best for healthy sleep.

Q: What is the circadian rhythm? A: The internal process that follows a 24-hour cycle and regulates sleep and waking, digestion, hormone release, and many other bodily functions.

High fat diets may be associated with poor sleep and increased symptoms of sleep apnea. Studies on rats showed that fat increased daytime sleepiness as well as sleep fragmentation. (7) These effects may be due to changes in sensivity to orexin, a brain chemical that promotes wakefulness.

While the science regarding food and sleep is in its infancy, researchers agree that eating a variety of low-glycemic foods is best for health, as is avoiding late-night meals that can activate the digestive system and disrupt the circadian rhythm. (8)

Regular exercise is associated with a stronger cardiovascular system, a healthier weight, and a lower risk of certain cancers. Exercise helps to reduce levels of LDL cholesterol, or “bad” cholesterol, and raise levels of HDL, or “good” cholesterol. People who exercise tend to be happier and live longer than those who don’t, even if they started later in life. They also tend to sleep better. (9) But how exactly does exercise impact sleep, and vice versa? 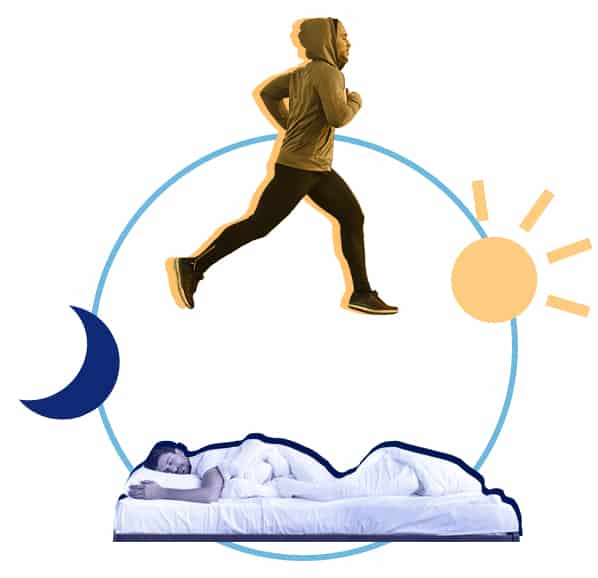 Sufficient sleep is necessary for the proper functioning of muscles and the repair and rebuilding of tissues after weightlifting or a vigorous workout. The majority of muscle regeneration takes place during sleep when growth hormone is released by the pituitary gland.

New actions the muscles have taken during waking hours are logged as memories during sleep. This type of memory is called “procedural memory,” and refers to motor skills such as riding a bike or learning to ski. Procedural memory does not take conscious thought, and is also involved in such skills as playing an instrument and learning a language.

The release during sleep of the hormone prolactin helps reduce inflammation and promote recovery in joints. Blood flow to muscles increases during sleep, allowing them to receive the oxygen they need to repair.

While the scientific research is not yet certain, some studies reveal that exercise has a positive effect on sleep, particularly in people with chronic insomnia. (10) This may be because exercise impacts the effect of stress hormones such as cortisol and arenaline, both of which can contribute to hyperactivation of the central nervous system. This hyperactivation, along with negative psychological associations with the bed and sleep, is a common cause of persistent insomnia.

Physical activity increases nighttime levels of a chemical called adenosine, which enhances the desire to sleep. (11) Adenosine can also help boost blood flow to muscles during exercise. (12) Sufficient sleep lowers levels of adenosine in the brain and promotes daytime alertness, while sleep loss results in elevated levels of adenosine and feelings of fatigue and grogginess.

Adenosine acts in the brain as an inhibitory neurotransmitter that depresses the central nervous system. Adenosine rises over the course of the day, inhibiting processes associated with wakefulness and increasing feelings of sleepiness.

Preventing sports injuries is an important consideration for anyone participating in physical activity. An injury can result in significant pain, lengthy down time, and reduced mobility, particularly in older athletes. Adequate sleep is important to protecting against sports injuries, and in expediting recovery when they do occur.

Studies show a strong correlation between adequate sleep and optimal athletic performance. (13)  Sleep deprivation doesn’t appear to reduce short-term muscle strength, but in many studies is associated with reduced physical stamina, motivation, and coordination. Lack of sleep may also have more of an impact on exercise that uses larger muscle groups, such as the quadriceps and back. This can lead to various types of injury, including: 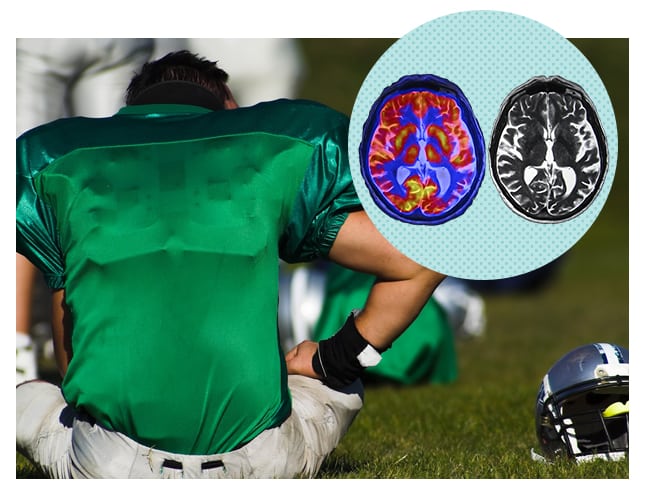 Sleep deprivation is also proven more likely to lead to athletic injuries of the brain, such as concussion. (14) One study showed that adolescent athletes who slept more than eight hours a night were 68% less likely to suffer injuries than teenagers who regularly slept fewer.

Older people who exercise are more vulnerable to injury than those who are younger, and lack of sleep raises the risk even more. Sufficient sleep lowers the risk of injury, boosts athletic performance, and helps build muscle and bone strength.

Proper nutrition, exercise, and sleep are crucial to health and longevity. Healthy sleep habits help to regulate metabolism and discourage fat storage, and give us the motivation and energy to exercise. Though individual needs vary and change throughout life, what we eat, our exercise habits, and the quality of our sleep have a significant impact on well-being and quality of life.