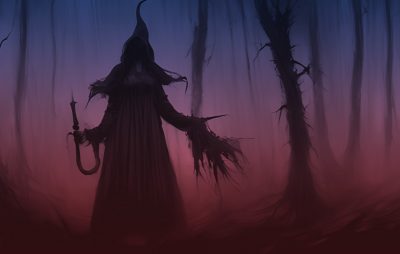 If you’ve experienced the downright terrifying experience of sleep paralysis, you’re not alone. Roughly 30 percent of the population can say the same, and there are plenty of legends and lore from long ago to explain this once unexplainable phenomenon. Sleep paralysis is often accompanied by a heavy sensation, as though something is sitting on your chest and keeping you immobile—in Newfoundland, Canada, that “something” was a witch-like creature known as the “old hag.”

Who Is The Old Hag?

The old hag, also known as the night hag, is described as a wrinkled and withered old woman, “witch-like” with her long hair and drawn countenance. The story goes that just as you fall asleep, she creeps in, crawling from the foot of your bed to perch on your chest, making it impossible to move or breathe and generally scaring you senseless.

What Is The Story Behind The Old Hag?

It’s not surprising that people who experienced sleep paralysis long ago came up with their own explanations for such an awful experience, and an old hag sitting on their chest makes as much sense as an evil spirit. In fact, in Newfoundland, it makes perfect sense. Culture plays a big role in folk tales and mythology, and many of the province’s early settlers came from England, Ireland, and Scotland, where witches certainly had an influence.

Until the early twentieth century, “hag-riding” and “hagging” were common explanations for sleep paralysis in certain parts of western and southern England. In fact, in Somerset and Dorset, assault cases were brought before the courts against suspected witches thought to be behind this sort of witchcraft. As people emigrated to Newfoundland, these sorts of beliefs came along as well.

In manuscripts from as early as 1896 in Newfoundland, people share stories of the old hag and what might be done to keep her at bay: “A man… told me he had been ridden to death by an old hag, until a knowledgeable old man advised him to drive nails through a shingle, and lash it to his breast when he went to bed.”

In 1978, a small paper looked at the psychological and physical experiences interpreted in Newfoundland as an old hag attack to those of sleep paralysis. Data from 69 adults revealed no psychological or physical illness differences between people who believed they had been visited by the old hag and those who had not. Still, the legend persists. Even today, people in Newfoundland are likely to describe sleep paralysis as being “hagged.”

What Is Old Hag Syndrome?

Old hag syndrome is a term used primarily in Newfoundland to describe symptoms of sleep paralysis. People awaken suddenly but are unable to move and have difficulty breathing due to a feeling of heaviness on their chests. Many people report a strong sense of something evil or sinister. It’s a terrifying experience, sometimes accompanied by hallucinations—people “see” things they cannot explain.

With old hag syndrome, that sinister presence is thought to be a witch who is sitting on someone’s chest, making it impossible to move. While Newfoundlandic folklore blames sleep paralysis on the old hag, other cultures have their own explanations. In pre-Islamic Arabic stories, for example, it was the jinn possessing people with nightmares and causing the heavy sensation associated with sleep paralysis.

The scientific explanation isn’t quite as sensational. Sleep paralysis is what happens when you wake up as you’re going into or coming out of the rapid eye movement (REM) stage of sleep. This is when you’re most likely to have dreams, and the muscles in your limbs are most relaxed—your brain keeps them still to avoid injury that may occur if you move during a dream. In addition to feeling like you can’t move, other symptoms of sleep paralysis include the inability to speak, a sense of helplessness and fear, anxiety, panic, a tightening in the throat, and  feeling like you’re being suffocated.

Is The Old Hag Good Or Evil?

The old hag is unquestionably a frightening entity. While the stories of some mythological creatures can get a little contradictory at times, themes about the old hag are dependably evil.

Folklore in Newfoundland is a big component of the province’s heritage, and there are many similarities to folktales from what is now the United Kingdom. Many of these tales are whimsical, like the oral stories about the province’s mischievous, enchanting fairies. But while these tales warned that fairies were to be respected and avoided, though not necessarily feared, the old hag is a story meant to frighten.

Modern Portrayals Of The Old Hag

In European folklore, a hag is an ugly, evil old woman who dabbles in witchcraft. It’s a definition that endures today. While some Newfoundlanders may still blame the old hag for a poor night’s sleep, modern portrayals cast her as something far more deadly. A TV series called “Hag,” available on Amazon’s Prime Video, a movie called “The Old Hag Syndrome,” and various depictions of malicious old witches in the horror genre paint the character as something truly evil.

Cultural influences play a big role in mythology and folklore, and the old hag is a great example. A frightening old witch who camps out on your chest while you try to sleep is a wonderfully scary explanation for sleep paralysis. And in Newfoundland, where many are descended from the English, Irish, and Scottish, it makes a lot of (spooky!) sense.