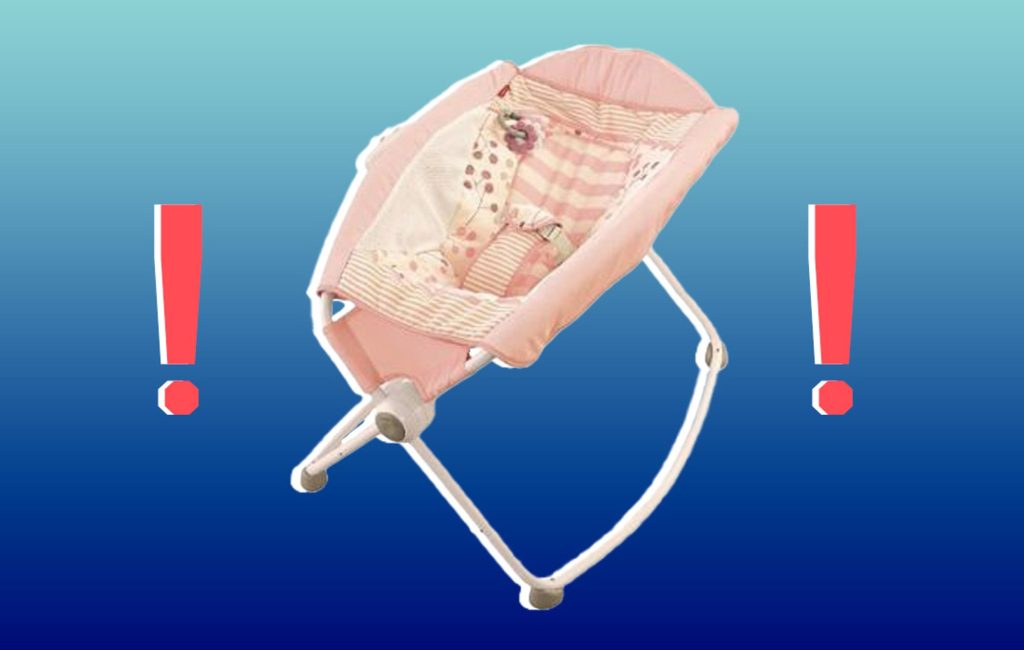 Just because a product has been recalled doesn’t mean everyone stops using it right away — and that’s what prompted a “reannouncement” of a 2019 recall on Jan. 9 for the popular but deadly Fisher Price Rock ‘n Play sleeper.

The Consumer Product Safety Commission (CPSC) reports that even though the product has been recalled for over three years, additional babies have tragically died using it in the meantime. At the time of the original recall, over 30 fatalities were reported, including infants rolling while unrestrained, and other circumstances.

Since then, an additional 70 fatalities have been reported, totaling around 100 deaths from the product.

In 2019, the CPSC recalled around 4.7 million products. At the time, the agency reported that at least 30 deaths had been linked to the Rock ‘n Play since the product’s launch in 2009.

According to the New York Times, an additional eight deaths occurred following the original recall, and an additional 70 have been reported (though Mattel, the parent company of Fisher-Price, told the CPSC that in some cases, it was unable to confirm whether the Rock ‘n Play was involved).

Although recalled, the Rock ‘n Play continues to be passed down through relatives and friends, and is still widely available on second-hand markets, contributing to the ongoing usage against the recall’s advice.

On Jan. 9 the CPSC also reannounced a previous recall of a very similar product, the Kids2 Rocking Sleepers. Fifteen babies have died while using this product, eleven before the April 2019 recall, and four since then. The fatalities were due to similar issues as the Rock n’ Play.

Stop using it immediately and contact Fisher-Price for refunds or vouchers.

Mattel reiterated that recommendation in a statement to the New York Times, saying, “Today’s announcement serves as a critical reminder to both consumers and resellers that they should not use, sell, or donate the recalled Rock ‘n Play.”

What to Know About Inclined Baby Sleep Products

The Rock ‘n Play is an inclined sleeper that rocks either manually or by plugging it in and turning on an automatic rocking function. Inclined baby products are popular – most parents have probably plopped their baby into some kind of inclined swing at some point for a five-minute break – and they can be safe under close supervision.

But letting your baby sleep on an incline is risky, a conclusion that prompted a new Congressional law in June 2022, called the Safe Sleep for Babies Act. This prohibits baby product companies from marketing, designing, or intending inclined products to be marketed as safe sleep spaces for babies. The rule specifies that no product can promote babies sleeping at an angle of more than ten degrees.

Dr. Anita Patel, a pediatric critical care doctor, explained in a previous Sleepopolis interview, that babies have little neck control, so if their heads slump forward in an inclined device, they are at risk of suffocation.

She also explained that even if parents don’t intend for children to sleep in these types of products, it’s easy for them to be “lulled” to sleep by the rocking motion, so they have to be well-supervised while using any product that isn’t a flat, safe crib.

In addition to suffocation concerns, Dr. Harvey Karp, pediatrician, author, and inventor of the SNOO, also told Sleepopolis in June that the restraining belt can slide up and cut off the baby’s airflow, and the plush surfaces on many products are also a suffocation risk. He calls all of these dangers the “tragic trifecta,” re-emphasizing stopping use of the Rock ‘n Play and other inclined products immediately.

The experts we interviewed, alongside the CPSC, reiterate the safest conditions and practices for baby sleep:

Though it can be tempting to continue using inclined baby sleep products, especially when you are exhausted, the risk isn’t worth it.