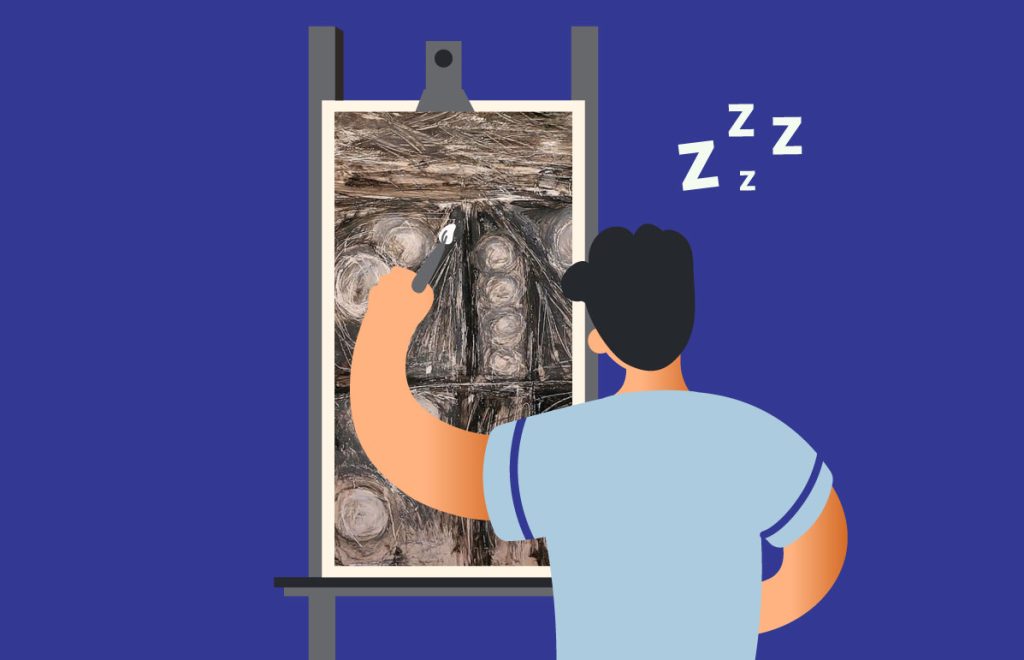 Like a lot of creative people, artist Lee Hadwin has a specific process by which he works. The twist? He only works while he’s sleepwalking. While a little unusual, Hadwin’s had a successful career as an artist – his work has hung in galleries all over the world, and Kim Kardashian is a fan. Here, he shares with Sleepopolis writer Sharon Brandwein what it’s like to do your best work in the middle of the night – while completely asleep.

It’s a very strange feeling to watch yourself doing something you have no recollection of the next day. Not only is there a huge disconnection, but to be honest — it’s also a little embarrassing.

When I was 4 years old, I began getting out of bed in the wee hours of the night and drawing. Decades later, I don’t quite remember that first drawing. But from what my parents tell me, it was just scribbles. My medium was the wall underneath the stairs at home and the usual suspects in every four-year-old’s toolbox — crayons.

You might think that a four-year-old drawing on the walls of his parent’s home doesn’t sound extraordinary by any means, but when you pepper in the fact that I was asleep when I did it and I have no artistic ability while I’m awake, the story quickly picks up some momentum!

As a young boy growing up in London, the doctors assured my parents that I would grow out of it. But a couple of decades later, I’m still at it. Over the years, I have created hundreds of drawings, and my work has evolved far beyond crayons and far beyond scribbles.

At age 15, I drew a pencil sketch of Marilyn Monroe that not only went on to fetch £4,000 from the Marilyn Monroe Museum in Hollywood, it also made an appearance in Kim Kardashian’s dressing room the night she wore Marilyn Monroe’s dress to the Met Gala earlier this year. Donald Trump even purchased one of my paintings for six figures.

My artwork has been displayed in galleries all around the world, and many have sold for anywhere between $1,500 and $10,000. But my favorite is the smallest piece I have ever done — a 1” by 1” pencil sketch.

In my attempts to sort this, I have undergone several sleep studies at the world-renowned Edinburgh Sleep Centre. In the process, I have been wired, watched, and monitored, recorded videos of me sleeping for doctors to observe, and kept awake for 36 hours at a time. Ultimately, while the doctors are all in agreement that I and my talents are certainly unique (a word I hear often), they’ve only come so far as to label my sleep artistry as a form of parasomnia and sleepwalking.

Sleepwalking and parasomnias aside, I sleep just fine, maybe even a bit heavy at times, and perhaps not surprisingly, I can fall asleep almost anywhere. And in spite of being a night owl (sometimes going to bed as late as 1 a.m.), I usually get about seven hours of sleep per night. Generally, my sleep artistry doesn’t interfere much with my life otherwise.

On the days following a sleeping sketch session, I typically feel a lot more tired, but apart from that, I feel no different. My partner of 23 years, on the other hand, is a very light sleeper but still incredibly supportive of both my art and my sleepwalking. As a matter of fact, it’s not unusual for him to get up in the middle of the night to film me. Understandably, though, he often ends up sleeping in one of the spare rooms.

I keep paints and similar tools by my bedside but rarely use them. The sleeping artist in me seems to prefer coal, pencils, and whatever is at hand. Once, in 2006, while staying at a friend’s house, I used chicken bones and charcoal out of the BBQ and drew all over their new walls – we eventually cut the piece out, and it now lives in one of my apartments.

Typically, I create two to three pieces a week. But sometimes I can go months without producing anything – I have gone a couple of years too. When I was 19, I hit a spell where I didn’t produce anything for two years. Eventually, it came back just as easily as it disappeared. While staying in a hotel in Russell Square in London, I woke up and scribbled on a hotel notepad next to the bed. Interestingly, I’m in a bit of a spell now. The last time I produced something was back in February 2022. I may not be drawing at night, but I still get up and sleepwalk.

My doctors have said many times that my particular case is quite unique. And I have to agree with them. I have received emails from people around the world who have the ability to write and talk in full sentences in their sleep, but I’ve yet to meet anyone who produces art while they sleep when they cannot do so in their waking life.