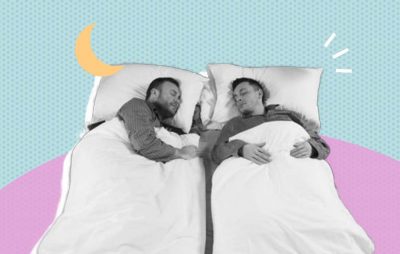 If you live with a romantic partner, odds are you share a bed. While sleeping with your partner is a social norm and certainly can be cozy and romantic, I think everyone who shares a bed has had a moment in which their sleep was disrupted due to their partner. And as much as you love your partner, if their presence in your bed is causing you to lose sleep, your rose-colored view of them may start to turn rather dark.

For some extreme cases, this sleep disruption has led couples to get a “sleep divorce” — sleeping in separate beds or bedrooms, à la 1950’s television. But if things haven’t gotten that dire yet, there are other changes you can make to try to improve your sleep situation. One such solution is the technique known as the Scandinavian sleep method. 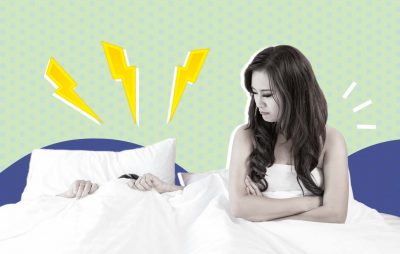 What is the Scandinavian Sleep Method?

While the name makes it sound like some kind of elaborate process, the Scandinavian sleep method is simply the practice of using two separate duvets or blankets instead of one queen or king size one. And if you want to be truly Scandinavian, you’ll want to forego your top sheet as well.

The Scandinavian sleep method earned its name because the practice is fairly common in the Scandinavian countries — Denmark, Norway, and Sweden — but it’s also done in other parts of Europe, like Iceland and Germany. If you come from a single-duvets country, like the United States, this may seem like a strange practice, but it could be the key to finally getting a good night’s sleep. 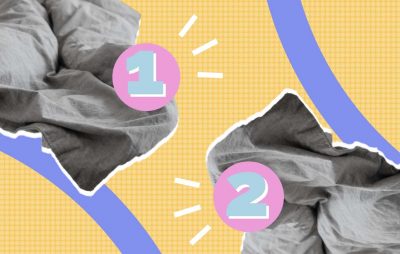 I decided I wanted to try this Scandinavian way of sleeping — not only because I find the cultures of Scandinavian countries really interesting — but because I’m the kind of person who loves to cocoon myself in my blanket, which is hard to do when sharing. I also have a consistently cold body temperature and surprise, surprise: my boyfriend is basically a human furnace. Plus, no one enjoys a blanket tug-of-war in the middle of the night.

The double-duvet system seems like the perfect solution to these issues, so in the name of research, I bought two twin-sized duvets, enlisted my boyfriend, and began a little Scandinavian sleep experiment.

How to Do the Scandinavian Sleep Method

Making your bed with two duvets instead of one may seem confusing, but it’s actually pretty simple. To set my bed up Scandinavian-style, I first removed my top sheet, or flat sheet, from my bed.

Then I took my two twin size duvets and laid one on each side of the bed. I overlapped the duvets in the middle of the bed so that only about a quarter of the blanket hung off the edge of the mattress.

I did this both to make the bed look neater and to ensure that each person would be in the middle of their duvet while sleeping — you don’t want half your blanket hanging over the edge of the bed.

I also added a blanket to the end of the bed, folded in half. This isn’t technically part of the Scandinavian sleep method, but I thought it made the bed look more put together. It also gave me the option of unfolding the blanket to add more warmth over our duvets.

We tested the Scandinavian sleep method for about two weeks to get a good sense of what we liked and disliked about it, as compared to sharing one larger blanket. After the initial night of testing it out, we were already finding things that we liked about each having our own duvet and the longer we tested it, the more those things were really cemented.

Overall, both my boyfriend and I ended up really liking this two-duvet system! My boyfriend even said he was pretty much “converted” to the Scandinavian method. But to give the full picture, I came up with a list of pros and cons based on our experience with this new style of sleep.

Pros of the Scandinavian Sleep Method

Cons of the Scandinavian Sleep Method

When it comes to sleep, I think I’m ready to go full-on Scandinavian! I found a lot to love about this two-blanket system, as did my boyfriend. If we continue with this sleep method going forward, I think I’ll likely invest in a warmer duvet, as the one I bought for this experiment wasn’t keeping me quite warm enough. Again, I am a notoriously cold sleeper. However, I still see this as a great aspect of the Scandinavian method: I can opt for a thicker, warmer duvet, while my hot-sleeper boyfriend can pick one that’s more temperature-neutral.

If you and your partner have some of the same struggles I mentioned my boyfriend and I had when it comes to sharing a blanket, I seriously recommend you give the Scandinavian method a try. You don’t lose any of the coziness of sharing a bed, but it allows you to prioritize your own comfort and sleep without detracting from your partner’s.

Amelia is a Senior Staff Writer for Sleepopolis. She primarily covers bedding and sleep accessory products in reviews, how-to guides, and more. You can also find her over on the Sleepopolis YouTube channel. Amelia is a graduate of the University of North Carolina at Chapel Hill, with double majors in media and journalism and in dramatic art. Outside of work, Amelia can usually be found on a hike, traveling to a new city, or at her local thrift store.