Depression and Sleep: Understanding the Relationship

With everything going on in the world and our busy lives, it can be easy to put mental health on the back-burner. Sure, you’re more fatigued than usual — and maybe a little more irritated, but surely that’s just because you’ve been having a hard time sleeping. Right? While these symptoms can be easy to justify as a simple byproduct of a stressful schedule, they could very well be symptoms of something more significant at play, like depression.

Depression is a mental health disorder that affects the way we think, feel, and act. It can range in severity, with more serious forms being diagnosed as clinical depression, and more mild forms taking the shape of temporary periods of sadness. There are also different types of depression, including:

Though you might be tempted to shake off any potential depression symptoms as an off day, week, month, etc., one in six Americans will experience depression in their lifetime, so it’s best to be thoughtful regarding your mental health and be prepared to contact a medical professional if you find your symptoms growing unmanageable. 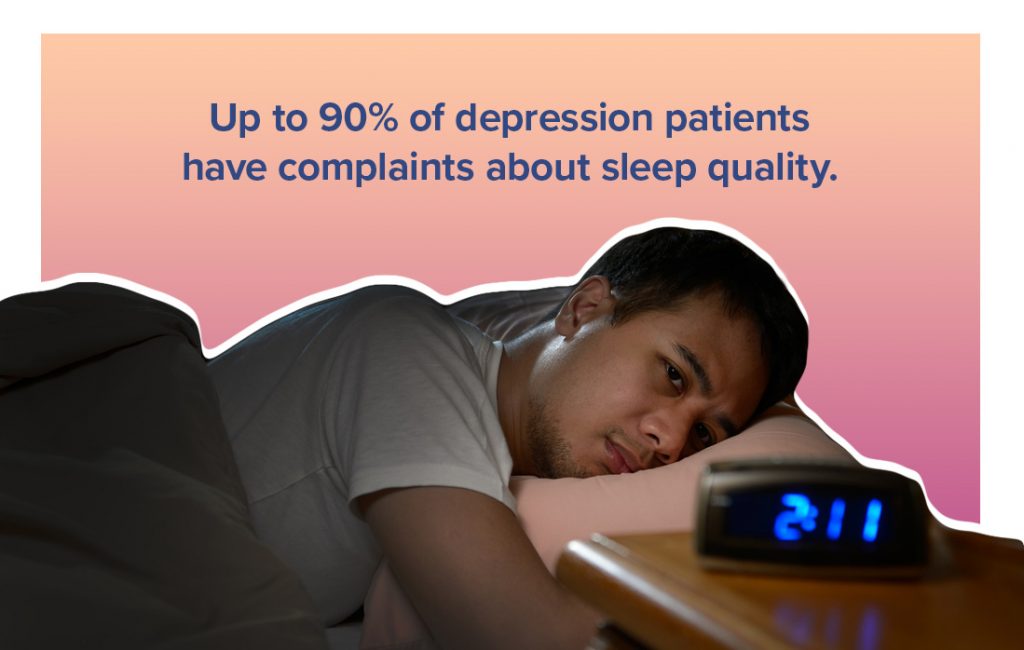 How are depression and sleep related?

How Can Depression Affect Sleep?

Studies have shown that people with depression often suffer from disturbed nighttime sleep (DNS). People who have DNS may fall asleep quickly but find themselves waking up frequently over the course of the night, greatly diminishing their sleep quality. Likewise, epidemiological studies studying the connection between insomnia symptoms and depression have shown that sleep symptoms occurred in 50% to 60% of adults tested between the ages of 21 and 30.

Those suffering with depression might also find themselves oversleeping or suffering from hypersomnia — feeling excessively sleepy or drowsy — though the latter is much less common.

How Can Sleep Affect Depression?

In order to determine if you have depression, it’s important to be aware of the possible symptoms and causes behind the illness, as well as potential treatment plans to discuss with your doctor. Read on to find out more about the causes, symptoms and treatments for depression.

Symptoms of depression may include:

Depression can stem from a variety of causes, most of them relating to current life circumstances. Common causes include:

Loneliness. A person could experience loneliness for a variety of reasons — perhaps it’s a college student’s first time living away from home and they’re having a hard time connecting with classmates, or someone’s first time living without family or roommates. Any time someone feels cut off from family or friends, there’s an increased likelihood of loneliness and depression.

Personality. Certain personality traits may make a person more prone to depression, such as low-self esteem and a higher tendency toward being self-critical. Factors such as genes or childhood experiences may also play a role and could lead to a higher susceptibility to depression.

Family History. If someone in your immediate family has been diagnosed with depression, your chances of developing the condition are considered higher.

Alcohol and Drugs. Using alcohol or drugs in access can lead to an increased risk of depression. Studies have shown that binge drinkers are more likely to exhibit symptoms of depression, and research has shown that regular and heavy majiuana users are more often diagnosed with depression than non-users.

Illness. Illness creates many paths to depression. For example, those who suffer from chronic pain can suffer from lack of sleep, stress, and hopelessness, leading to depression. Other long standing illnesses can also lead to depression, such as coronary heart disease and cancer. 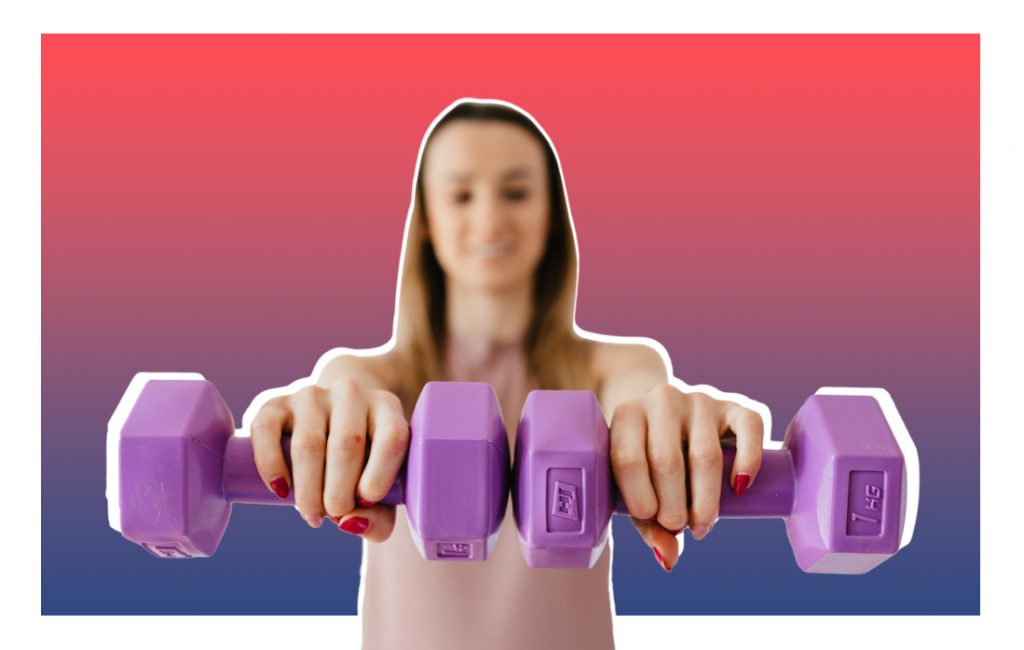 Though depression can feel all-consuming, it’s an incredibly treatable condition. Below are some viable options for those who suffer from symptoms of depression:

Self Help. Prioritizing your physical and mental wellbeing can be a game changer for those who have symptoms of depression. Exercising, getting enough sleep, eating nutritious food, spending time outdoors and meditating can all make a significant impact on your mental health. If motivation is a challenge, you might consider using an app to track your exercise or facilitate meditation to help you start a positive habit. For those who have long struggled with sleep, adapting good sleep hygiene could make a significant difference — you can start small, like going to bed at a consistent time and incorporating the same soothing steps into your nighttime routine.

Therapy. Depending on the degree and type of depression someone is suffering from, therapy can make a significant difference in someone’s depression symptoms. For those suffering short term, situational depression, talk therapy with a counselor could be all they need. For others, considering more specialized therapy, such as psychodynamic therapy, behavioral therapy, or psychotherapy with a psychiatrist may be necessary.

Medicine. Depending on the severity and duration of depression symptoms, your doctor may work with you to prescribe medication. It’s important to note that though therapists that are licensed medical doctors, like psychiatrists, can prescribe meditation, not all therapists have the qualifications to do so. Some states do allow clinical psychologists to prescribe medication, so be sure to do research on your state laws if you think medication will be a part of your treatment plan.

Alternative Medicine. When used in conjunction with other treatments, alternative medicine may be a helpful part of a depression treatment plan. Popular options include acupuncture, biofeedback and hypnosis.

Be Social. Though it can be hard to muster the motivation to be social when experiencing symptoms of depression, spending time with friends and family and engaging in activities you enjoy can help prevent you from spiraling further into depression. Leaning on your friends and family can also help keep you on a path toward healing.

Depression and Sleep: Myths vs. Reality

Though depression is a common condition, many myths still run rampant. We’ve debunked some popular myths below:

Depression is the same for everyone

Though people may experience common symptoms, depression looks and feels differently for everyone. Even if people have the same diagnosis, symptoms may manifest themselves differently.

Depression only happens when someone endures a traumatic event

Not all depression is caused by trauma. Other factors that can come into play include lifestyle, family history, environment, chronic pain, and other medical conditions.

Depression does not discriminate — it can strike anyone at any time, no matter how “mentally strong” they may seem. Many people chose to suffer in silence due to the stigma surrounding the condition, but depression is truly a mood disorder that doesn’t reflect someone’s mental fortitude or work ethic.

People with depression can just ‘shake it off’

Though depression may be invisible on the surface, it can be just as debilitating as some physical illnesses. People who are diagnosed with depression will need to follow a treatment plan to decrease their symptoms.

Once you’re on antidepressants, it’s for life

Though some patients may be prescribed antidepressants long term, many doctors will prescribe medication along with therapy, which helps patients learn new coping mechanisms that may help them face life challenges without medication in the future. 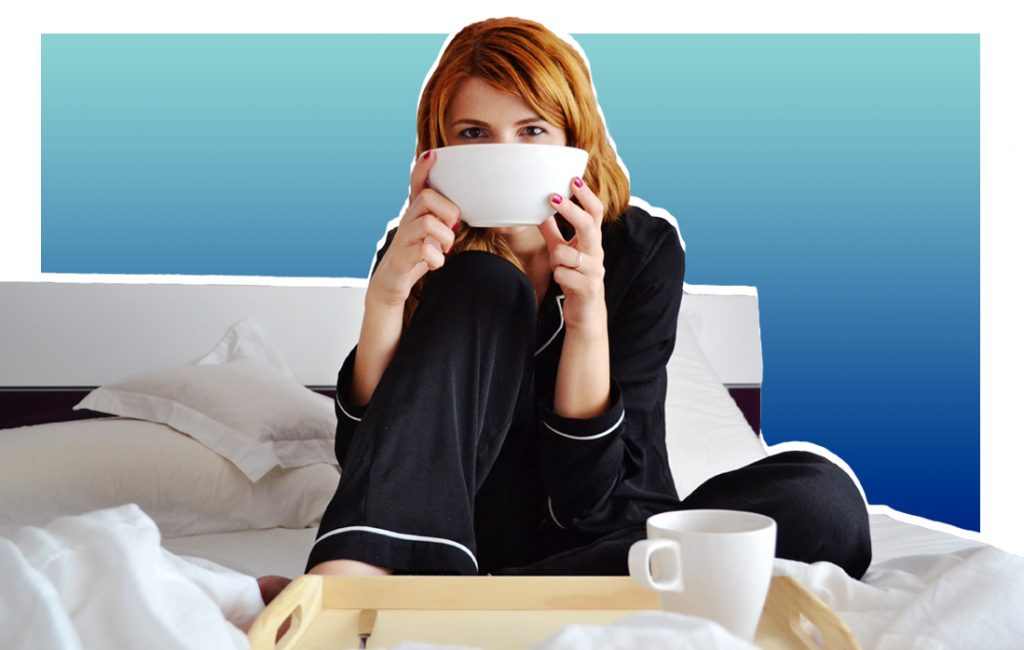 When To See a Doctor

If at any point you feel you’re exhibiting worrisome symptoms of depression, or you have symptoms that linger for more than two weeks, reach out to your doctor for guidance.

Though there’s still an unfortunate stigma surrounding depression, it’s an incredibly common mental disorder — approximately 280 million people around the world have it in some capacity. And while depression can make a person feel hopeless, there are ways to feel better, from adopting a healthier lifestyle to talking to your doctor about a treatment plan.