Everything You Need to Know About REM Sleep Behavior Disorder 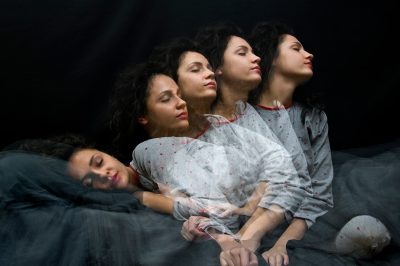 If you know anything about the rapid eye movement (REM) sleep stage, then you probably know that temporary paralysis and dreams are part of the deal. For a small segment of the population, however, the temporary paralysis doesn’t materialize as it should, yet dreams still initiate right on cue. And when those two elements crash into each other under the cover of night, you have what we know as REM sleep behavior disorder (RBD).

What Is REM Sleep Behavior Disorder?

Rapid eye movement (REM) sleep behavior disorder is a sleep disorder characterized by dream-enacting behavior. Those with the disorder experience a “loss of normal skeletal muscle atonia” (translation: a loss of the temporary paralysis of your arms and legs) during the REM sleep stage and subsequently act out vivid and often unpleasant dreams.

Researchers estimate that about 1–2% of the population has REM sleep behavior disorder. Still, readers are cautioned to take that number with a grain of salt, as accurate assessments have proven to be quite difficult. Clinic-based estimates can only gather information from the small percentage of people who seek care as a result of injury or prompting from a bed partner, and screening questionnaires have their own obvious limitations as this disorder is a “REM state-specific occurrence, [and] individuals are often unaware of their behaviors.”

REM sleep behavior disorder is typically diagnosed by a doctor or sleep specialist. The most common diagnostic tools for RBD are physical exams, conversions with sleep partners, and sleep studies or polysomnograms.

As a first step, doctors will often conduct a physical exam and an assessment looking for common signs and symptoms associated with REM sleep behavior disorder.

Conversation With Your Sleeping Partner

In many cases, bed partners are awakened by RDB episodes and directly observe the goings-on. So beyond speaking with the patient, doctors may consult with sleeping partners, who might be far more helpful in shedding light on the situation. In addition to asking direct questions, bed partners may be asked to complete a questionnaire.

In some cases, your doctor may recommend a polysomnogram or an overnight sleep study in a lab. During a sleep study, the patient is hooked up to sensors that measure and monitor heart, lung, and brain activity, blood oxygen levels, breathing patterns, vocalizations, and arm and leg movements while they sleep. Trained technicians are also there for direct observations, and patients are usually videotaped to document their behavior during REM sleep cycles.

Researchers have yet to identify the primary causes of REM sleep behavior disorder, but there are some working theories, detailed below.

During normal REM sleep, neural activity in the brain inhibits muscle activity. This way, anyone dreaming during REM sleep will do so without arm or limb movement. In other words, most people won’t act out their dreams. For those with REM sleep behavior disorder, that neural activity is essentially disrupted, ultimately leading to REM sleep (and dreams) without the normal paralysis and atonia that goes with it. This causes the person to act out their dreams in what is known as REM sleep behavior disorder.

Who Is At High Risk For REM Sleep Disorder?

While researchers haven’t pinpointed the exact cause of RBD, they have identified several risk factors.

While many online resources indicate that punching, kicking, and flailing arms are hallmarks of REM sleep behavior disorder, research shows that reports of violence and aggression are largely anecdotal.

Common signs and symptoms of REM sleep behavior disorder include:

What’s The Difference Between RBD, Sleepwalking, And Night Terrors?

Sleepwalking, night terrors, and REM sleep disorder are all classified as parasomnias. While the three are often mistaken for one another, there are differences between them.

The Difference Between Sleepwalking And RBD

While sleepwalking and RBD may look similar, they are different parasomnias.

The first notable difference is that sleepwalking occurs early in the night, during non-REM and transitional stages of sleep. Sleepwalkers can typically navigate their environment with relative ease. In fact, some sleepwalkers have been known to engage in more complex behaviors while asleep, including eating and driving. Moreover, sleepwalkers are usually disoriented or confused when awakened from an episode and likely have no memory of the event.

On the other hand, events associated with REM sleep behavior disorder usually occur during REM sleep, which tends to occur later in the night. Moreover, those with the disorder don’t have the same level of awareness we typically see with sleepwalkers, so they can’t stray too far from their beds without incident.

The Difference Between Night Terrors And RBD

Night terrors are another parasomnia often associated (and mistaken) with RBD. And understandably so — like RBD, vocalizations and agitated behavior are hallmarks of night terrors. Also like RBD, someone having a night terror is unlikely aware of their surroundings, nor can they hear or communicate cogently. However, unlike RBD, night terrors occur outside REM sleep and earlier at night.

There is no specific treatment for REM sleep behavior disorder, but  Dr. Virginia Blackwell says the “symptoms can be managed with a combination of medications and lifestyle changes.” Things to consider for the management of REM sleep behavior disorder are avoiding triggers, taking the proper precautions to ensure your safety during an episode, and talking to your doctor about a pharmacological approach.

Some best practices for injury prevention include:

Remember that alcohol use and certain medications can trigger REM sleep behavior disorder. So to keep the symptoms in check and possibly reduce the frequency of episodes, you might consider switching to a “dry” lifestyle and speaking to your doctor about any medications you’re taking.

Beyond lifestyle changes and avoiding triggers, you can also opt for a pharmacological approach to treating RBD.

“The current treatment for REM sleep behavior disorder is a medication called Clonazepam,” says Eichelberger. “Clonazepam is a benzodiazepine, which means that it has sedative effects on the brain. It is used to treat insomnia and anxiety disorders, as well as some types of seizures. The goal of taking Clonazepam is to help your brain relax while you sleep so you don’t act out your dreams.”

Eichelberger notes that Clonazepam is typically taken orally, and while it can be effective, there are some notable side effects like drowsiness, dizziness, and impairments in memory and coordination if you take too much.